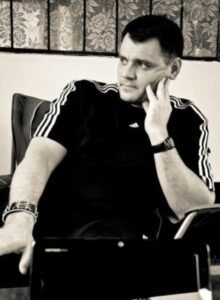 Gennadiy Mokhnenko was born in February 27 Donetsk area, Ukraine, in the family of factory workers. In 1991 he had taken a year course in the Bible school in Vilnius, Lithuania. In 1992 he founded the church where he has been a senior pastor ever since. Pastor Gennadiy Mokhnenko from the early years of the Church of Good Changes in Mariupol alongside with its board  has been taking an active part in the charity work that renders all kind of social support and help to the least defended layer of the population – street kids.
Ahead with him in 1998 was created and has been functioning since then the largest in Ukraine center of children’s rehabilitation “Republic  Pilgrim”.
In 1994 Gennadiy Mokhnenko was enrolled to the Donetsk Institute of social education, Department of History and Religion, and in 1999 he graduated from it. This very year he began his studies in the Kiev branch of Westminster Theological Seminary where he got his Master’s degree  of Theology. Presently Gennadiy Mokhnenko is occupying a position of a senior pastor of the Church of Good Changes in Mariupol. He is also a founder of rehab centers for adults, one of initiators of the action of the national adoption “You will be found”, and an adoptive father of over 30 kids and teens, a founder of several foster homes of family type including the one for HIV+ kids, also he is an overseer of the Priazovsky region  of the Church of God of Ukraine. Among his other activities – he had initiated the action of public protest against drug dealing “Sick of it”. Being a Bachelor in History and Religious studies, a Master of Theology, a missionary and a journalist he also wrote several books. Among them  there are “To execute not to have mercy”, “Non pedagogical poem”, “Back to the holy Rus… or to the age-old rot”. Also Gennadiy  has been  an anchorman of the TV programs “Two brief- cases” and “Different prospective”, an active blogger, and a partaker of the Ukrainian – American missionary project in Africa.