A chaplain and an adoptive father of 8 kids Albert Khomyak: “Serving these kids I am serving God”. 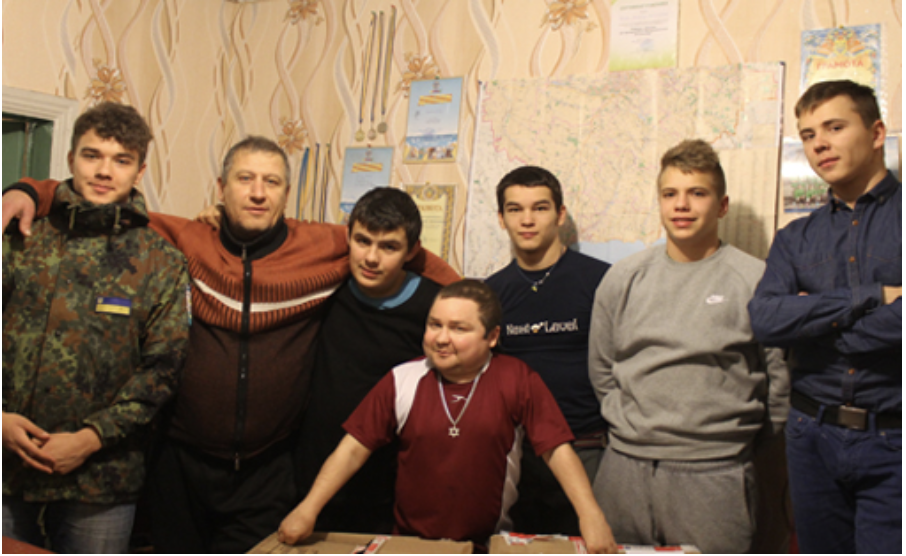 Albert Khomyak used to be a manager of the rehab center for adults where he was helping drug addicts and alcoholics to solve issues to do with addictions and for them to start new life. After one of the services where he heard about  the subject of adoption he came to the conclusion: it is better to take a child to your family and teach him before he gets into trouble and then one won’t need to correct him when he is grown up and in trouble”.

His heart conceived the idea of adoption since that moment. The final point before he made a decision to adopt a child was when he met an orphan from an orphanage who was brought to the church for an event. Presently Albert Khomyak is an adoptive father of 8 kids.

Albert Khomyak: « At that moment something clicked in my heart and I realized that I was ready. And then I got to know that not only a woman can give birth to a child since she is created for that but man can do that too for children are birthed from the heart”.

Since that moment the process of making papers has started. And it turned out that the boy has a brother and they can’t be separated this is why in 2006 the two boys altogether got to the family.

Albert Khomyak: “I realized that I can serve these kids, I can be a father and support. And I myself began to see that the kids were helping me and it is better for me too and also I realized that I have to be a good example for them and if I want to implement something good into them I have to start with my own behavior. As they say; “Don’t educate your kids, they will be just like you anyway. Educate yourself!” And what is also very important that serving these children I also serve God”.

In a few years Albert met a woman and they got married. However she died in 2 years and she had three kids of her own and Albert took the guardianship over them. The officials didn’t want to give him legal papers for guardianship for almost a year and it got to the point when the kids announced a hunger strike, they were standing in front of the building of the city government protesting against the intention to send them to the state orphanage.  And only in 11 months the fight for their guardianship has completed successfully.

And after that Albert with the kids made a decision to come to Mariupol where they were warmly greeted in the charity fund “Pilgrim” and where they were given a place to stay.

Later two more kids got to the family: Ruslan – this handicapped guy was just living in a hospital without any guardianship, and later on Alexey who came to tone of the rehab centers searching for care and support after his parents died.

In 2014 3 more children appeared in the family and also three more guys had become unofficial sons of Albert, they just perceived Albert as their father.

Presently three oldest sons live independently and they just come to visit. 5 of them live with the father; they study and go in for sports professionally. One of the guys was a tenfold champion of the Dnepropetrovsk area in wrestling, and the other one has recently started going into football professionally and his team has occupied the 1st place in the Donetsk area.

Albert always considered himself an active and diligent citizen of his country this is why when the first conflicts had started in Ukraine, when the manifestations had started on Maidan, he and his family went to Kiev to show that they are against beating people, they were standing with the other demonstrators seeking justice.

And later when the wave of the political conflict reached Mariupol, Albert also took an active position; he attended meeting supporting Ukraine and raised his voice against separatism.

Albert Khomyak:“I love my country and I take responsibility for what is going on in it. After the first Ukrainian road blockhouse was open we started supporting the soldiers, for if we don’t support our army we will have to support somebody else’s army on their terms”.

Later the food and moral support of the Ukrainian army grew into a real ministry because the soldiers and the civilians in the war zone urgently need not only material support but also the words of support and encouragement.

Presently not only Albert goes to the frontline, there are 15 people in his team and they regularly render material, spiritual and prayer support to the Ukrainian soldiers and people who live in about 20 villages in the area of Granitne and Shirokine Villages.

Within these two years the chaplains’ team delivered over 200 tons of food, goods for the amount of about 3 mln.UAH. They helped over 100 people to move out of the war area and two families they evacuated when there was a horrible shelling in the Shirokine village.