Gennadiy Mokhnenko “There is no such thing as bad genes” 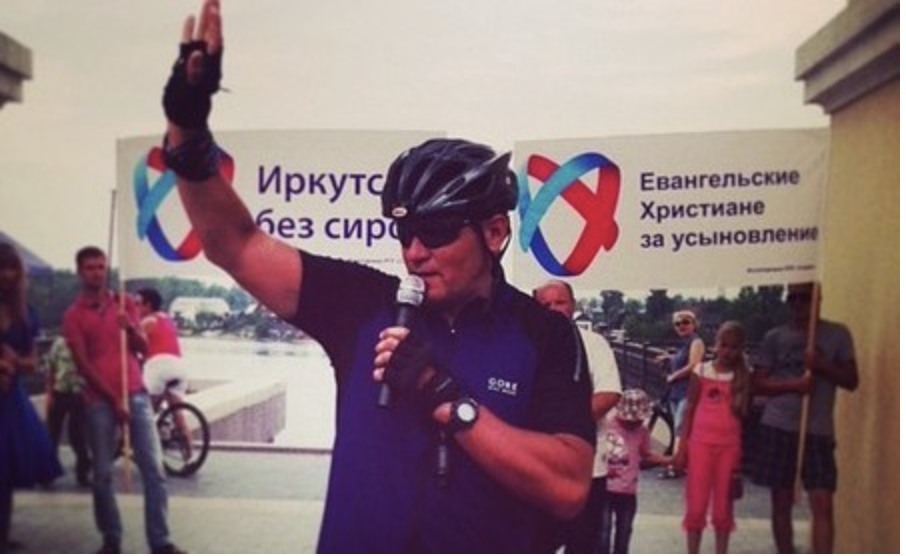 Within 2 years of the worldwide bike action “Russia and the world without orphans” its participants rode a distance of 2 grand-tours. It’s 5000 miles through Ukraine and Russia. There are no professional bikers among them. There are adult men, teenagers and even younger boys who barely started reaching the pedals. But within each day they ride about the distance of tour de France – 62 miles, 93 miles, 127 miles per day. And more than that – within the nearest 5 years the bikers are planning to ride around the Globe and to come back to their native Mariupol. And in winter times they plan to “run” up to the mountain top of Jomolungma, to ride through Africa… The purpose of each of such trip according to the main initiator of the action, Gennadiy Mokhnenko< - is to motivate people around the world to adoption, orphans need families.

Hehimselfhas 32 adoptedkids. Theyareformerstreetkids. He used to find them in sewers and basements of blocks of flats, he would wash them and raise them… he did everything to prove  – there is no such thing as bad genes, even if the biological parents of a kid were drug addicts or alcoholics the children won’t inherit it.  He managed to prove it to Ukraine, partly to Russia and the entire world is waiting….

How did the idea of the bike action come to your mind? Why  is it precisely a bike- action?

It is not our first action. We did many radical sports actions with my sons. We ascended on Elbrus together. All the professionals that were around us tried to persuade us that we would fail and would never manage to ascend this mountain but we did! And then we ascended Ararat Mount, and with 2 of my sons we conquered the most dangerous volcano of the US Orphans are not second class children. They find themselves in orphanages not because something is wrong with them. Something is wrong with us, with our society and this is why such places still exist and some people still leave their children in them.

The idea of the worldwide bike action was quite spontaneous. We were sitting there coming up with ideas how to attract people’s attention to adoption; we wanted to do something really radical and shocking. So we decided to ride through Ukraine on our bikes. After it we saw it really worked. After our trip and our performances on city squares all around Ukraine several dozens of families made a decision to take a n orphan into their family. Even here in Krasnoyarsk right before this interview two families came up to me to ask about how to adopt and stuff. They are ready to take an orphan from an orphanage into their family! And after it we just felt we have no right to stop. We believe that each mile of our way persuades more and more families that they need and they can to adopt. I can seeit. SowedecidedtoridethroughRussia. We think Russia is as dear to us as Ukraine. My mother is from the province near St. Petersburg and my Dad was born in Kursk.

And as for the worldwide action… well it is that simple … of course we didn’t plan it from the very beginning… just once when we were making plan to ride through Russia and looking at the map one of my adopted son said – well, if we can do it through Russia we can cross the whole world on our bikes. Afterthattheverydecisionwasmade.

Were there any doubts that everyone should be able to make it? It is not a grand – tour but the children are quite young and the physical capacity has to be enormous….

All my guys are very athletic. Even those who I was nervous about surprise me day by day. They decently overcome the mountain passes, rains and cold weather… As the professional bike riders call it – it is real super

Yes, the ride in Grand tour less days than you do, don’t they?…

Yes, the Grand tour is usually 20 days and our trip has been 50 days so far. So super –multi -day trip is what we have rather than what they do. Of course we have also some days for rest in between; we are staying in Krasnoyarsk fo r3 days. Soourmuscleswillbeabletorestore.

What helps us a lot is our good equipment – really good bikes. They are fantastic. They were purchased with the help of the former member of joint team of the Soviet Union in bike sports Vladimir Efimkin. Also we were helped to buy professional bike uniform. So we look quite like those on tour de France, as you can see.

By the way, you will have to change bikes to the mountain ones, will you, because after Irkutsk the road will be at times quite mountainous?

We will try to ride our normal bikes there till there will be real mountains. We have now only 10 of them though so we’ll have to buy some more to be able to ride along the gravel. The next stage will be all the Far East – it is about 2500 miles, and then – Alaska, Canada, The US and old Europe.

Will you propagate adoption there too or you want just to ride through these territories? DoyouthinkAnglo–Saxonsneedit? It seems they don’t have such problem with orphans there. Andwilltheyacceptyou? Suchadifferentmentality…

Wewillchangeourstrategywhileweabroad. In Ukraine and Russia it is quite simple here are people gathered and they are standing and listening and tomorrow they will forget about their fears and will decide to adopt. They can clearly hear us. In the US there is a special system of foster care.  It is like a small orphanage in your house. People foster kids but for them it is like their job. They are not real parents for them. The children can change many of such foster homes till they grow up. We will call unto Americans to adopt the kids from such temporary places into their families where the children will be cared for not because it is paid for but because they are loved.

Are you for or against foreign adoption of the children in Ukraine and Russia?

It would be ideal if all our kids could be adopted by our people. And it is possible arithmetically. There is about 1000 working, good, caring people per each orphan. But Americans always adopted actively from other countries. And we will call unto them to keep doing it. Why to stop them? There are many rumors now and there are many stories being spread when Russian kids were tortured by American families. And unfortunately, it happens. But I also know thousands of cases when good American people adopt kids from countries of the third world and raise them with love as their own. They adopt many sick disable kids and cure them.  They adopt handicapped and they buy wheel chairs and necessary prostheses and restore them completely. They study, get settled and then they thank their adoptive parents. And there are much more such good examples than negative ones.

Besides, in our trips to the States and Europe we will look for partners- those who can support those in the Former USSR who adopted kids. It is also a normal thing if somebody who can not adopt a kid for some reason can at least support those who can.

How are you going to organize it all abroad? It is probably much easier to administrate everything when you are here in comparison with all the organization that has to take place there?

Of course in Russia people are being extremely hospitable. The mayors of the cities, the governors have been meeting us; also we have the support of the Council of Federation all throughout the route. And besides, this action has no analogy in the world. Never before former street kids, who grew up on sewers, would travel the world on bikes. So we will be received warmly wherever we go, it is guaranteed!

There are several organizations abroad already who showed interest in helping us in organizing everything for our trip. And we have 2 more years to prepares for it.  When there will be time for the US it will be more clear what we need to do.  I am sure there are many good people in the world. Today after the concert in Krasnoyarsk some people came up and gave some money towards the action. We have enough for food and stuff. And one family from Krasnoyarsk came up to us and took all the boys to the local sports store and bought brand sports shoes for everyone. They did it so generously with open heart.

The guys are very young, do they try to compete at times?

Ohyestheydo. ButIdon’tletthem. Our task is to reach our destination not to compete. This stage is almost 2800 miles. The only place where I let them overtake is on steep up hills. I have no chances against them here. But on the top they wait for me for sure.

What will be when the worldwide bike action is over? I know it is going to be in 5 years only but still?..

What for should we wait so long? We’ll do something else even in between our bike trips. This year in November we might go to Africa to ascend Kilimanjaro with the same purpose – to call unto people about adoption. Itisalmost 19600 Ft. Itisnotanordinarytouristtrip. Itisveryserious. We will also talk to people there, give interviews and give a good example of adoption. We don’t call unto people to adopt 32 kids, as I did. Adopt at least a child. And then we might see all the orphanages shut down because there will be no need in them anymore.