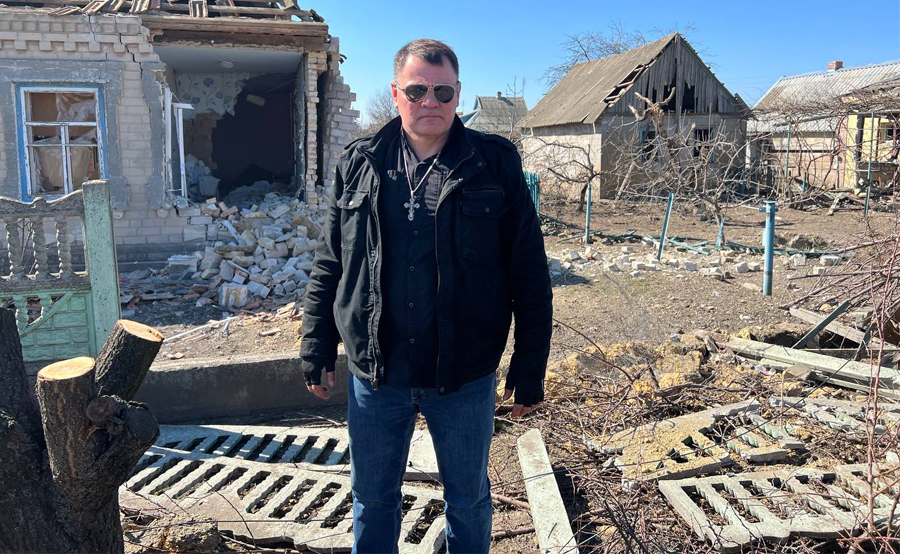 The Charity Fund "Pilgrim"actively helps people affected by the war, and this ministry is growing rapidly. The situation in Ukraine is deteriorating every day, people continue to die from bullets, shells, bombs, just on the streets or in their homes, many are buried under the rubble of destroyed houses. Those who survive do not have a livelihood and basic things for life.

Pastor Gennadiy Mokhnenko and his team are constantly in the east of Ukraine, right on the border of hostilities. Every day they take people out from under the shells, provide them with food and clothing, and then send them to the western part of the country.
Employees of the Fund Pilgrim, pastors and ministers from the very beginning of hostilities have established a permanent route of food to the center and east of Ukraine, and refugees who were able to get out of Mariupol and reach Ukrainian territory. For these purposes, several minibuses were purchased, and ministers are constantly buying food and clothes for the victims. Directly in western Ukraine, our employees receive and settle refugees and help them settle in Ukraine or cross the border of the country.
Employees of the Children’s Rehabilitation Center managed to urgently take the entire Republic Pilgrim Children’s Center, children and women from various ministries to western Ukraine, where it is still more or less safe, from under the shelling of Russian invaders. Living quarters were prepared in the basements of the church buildings and the children’s center, where hundreds of people hiding from shelling could be accommodated.
In recent days, it has become possible to take refugees out of Mariupol. Some active members of the Church of Good Changes, as well as ministers of the Charity Fund Pilgrim, risking their own lives, have already made several trips. People were left without any things and means of subsistence. Within the last few weeks they had been forced to hide in basements without light, food, water and heat. Many ran away from apartments in what they were, and did not have time to take warm clothes, medicines.
Russia continues to bomb the besieged Mariupol every day, destroying completely residential areas, infrastructure, erasing it from the face of the earth. People are in the most difficult conditions, grocery stores have already been completely looted, pharmacies have been destroyed and there are no medicines in them, water has to be sought in underground sources, which are not so many in Mariupol, children are sick in basements, no one buries the dead, so many lie covered just on streets, courtyards, on the balconies of high-rise buildings.
Citizens are not able to leave the basements and move around the city even to the points of possible exit due to massive shelling from the ground and air. The Russian aggressors also do not comply with the conditions for the humanitarian corridor; for several weeks now, a humanitarian convoy from the Red Cross, which is carrying water, food, medicine, as well as buses, has not been able to enter the city. Sometimes the parishioners of the Church of Good Changes get in touch, those who are able try to get either to the saving minibus, by which the ministers of the church and the fund take people out of the city, or they leave by themselves in their own cars, those who still have gasoline to leave Mariupol. Unfortunately, everyone is at risk and everyone decides to leave for himself. Every day the situation is changing, strong battles are taking place in different parts of the city, and therefore the routes for the removal of people can be disrupted or simply inaccessible.
We try our best to help the evacuees who were able to escape from death, and therefore we are immensely grateful for any help.

A black kid has become the president of the Republic Pilgrim.