ADVENTURES OF “THE ITALIAN GUY” IN THE US 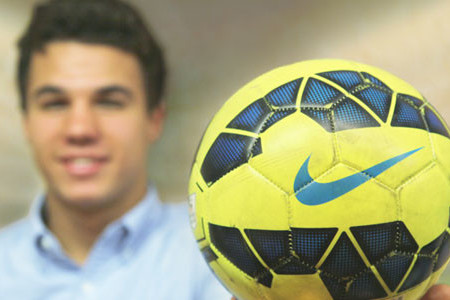 He had conquered one of the highest mountains in the world – Kilimanjaro, rode 9300 miles on his bike having started his way in Mariupol and having finished it in Vladivostok. He didn’t give up when all the life circumstances were against him. Who is this strong- willed and outstanding young man. His name is Sergey Kucheruk, he is an adopted son of the Pastor Gennadiy Mokhnenko. The story of his tough life moved me up to tears.

The story of Sergey’s life is not just a narration of 19-year-old guy about his dreams and plans, it is a grandiose way he passed and still has been going on despite of all the fears, tests, temptations and hardships.

Sergey, could you tell us about your childhood?

I was a street kid since I was 4. My Dad was a heavy drinker and so was my Mom. My grandparents were also alcoholics. I spent most of the time on street so social care people took me to a state orphanage alongside with my younger sister. I was 6 then. I remember this lack of parental love and care. I often would run away from the orphanage and would stand by our house where we used to live but I never had the guts to come in. I was just staring in the windows. My mother died last year, she had  pneumonia, my Dad was killed 9 years ago. My stepfather was a drug addict and he died this year. When I was 8 I first heard from my pal that there is this orphanage in Mariupol called Pilgrim. We bought tickets for the train and decided to go to Mariupol to this orphanage.

Were your adventures over when you got there?

To be honest they had just started then. I was forcefully taken back to that state orphanage because I was in Pilgrim illegally. But I couldn’t stay long in that orphanage so I would run away and live on streets again. When I was 8 I tried to snuff glue, to smoke and to drink for the first time, we did it with street kids like us. Since I was a difficult teenager, disobedient etc the management of the state orphanage decided to take me to mental hospital. So I ran away and just lived on street: I slept wherever, I was a beggar and then I would buy glue for 3 and a half Hryvnas and snuffed glue with the street kids like me. Pastor Gennadiy and his team were making night raids to catch street kids on streets and in sewers. They always found me there.

Do you remember a turning point that would change you and make you stop your street adventures?

I can’t remember a particular moment, it all was a gradual process. At first I ran away quite often. It seemed to me that there was sort of illusion of freedom when you live on streets, you Make your own decisions. I was surrounded by the guys like me. It is boring to be alone on street so we would stick to each other. After all we had the same interests: glue, drugs, alcohol. I can list a few factors that impacted me. While I was in Pilgrim we went to Worship services each Sunday. I went there too and listened to sermons of   Pastor Gennadiy. After some time I found some friends from Christian families. Their care, love and attention to me touched me andchanged my world view.

Besides I played soccer since I was a little boy. It was the only entertainment in the state orphanage and gradually it grew into a life time dream. So I decided to give up former pattern of life and to go forward towards my goal.

Where there any soccer player who were an inspiration for you in your athletic achievements?

I was surely delighted to watch the games with Roberto Carlos and with Ronaldinio. I still dream to play on such big stadiums like they do, I would love to travel all around the world and to bring victory to my team. Beside soccer I also went for boxing.  I even got a title of the champion of Ukraine among juniors. God loves me and supports me otherwise I would not be able to explain the fact that I was always surrounded by good people who helped me. The biggest miracle for me was to obtain family, real family where I am loved and where I am really happy.

I know that your friends jokingly call you “the Italian guy”. How did they come up with this nickname?

They started calling me “Italian guy” after they got to know that my sister was adopted by Italian family. She was 7 when they took her to Italy. I got to know about that and dreamed to find her contacts. The principle of the orphanage legally cannot tell us the contacts of the adoptive family but we managed to get the information about them from other source, praise God. I want to thank my Dad for bringing me to Italy for me to see her. So I got to see my sister Marina, in Italy they call her Maria. I am very happy for my sister, even though we saw each other only a day and a half but the very fact of meeting my sister was unforgettable… tears were automatically rolling from my eyes.

By the age of only 19 you managed to make some major achievements in your life and one of them is participation in the bike action “Heart miles”. Tell us how it was?

It wasn’t easy because there were no professional bikers among us, we all are just amateurs. The way from Mariupol to Vladivostok, 9300 miles was a very hard thing to overcome. Faith and desire to bring the idea of world without orphans was so strong so it really helped us. We wanted with our example to inspire other people to adopt orphans. My Dad receives emails regularly where people thank all of us for the bike action and they say that due to our example they made a decision and adopted kids from an orphanage.

This winter within the action “World without orphans” you conquered one of the highest mountains in the world – Kilimanjaro.  What emotions did you have standing on that mountain top?

Yes we conquered it with my Dad and my brothers while we were on a mission trip in Africa. It wasn’t first mountain I tried to conquer. When I was 13 I almost conquered Elbrus Mount and at the age of 14 I failed to conquer Ararat Mount.  So my first victory was the ascension to Reiner Volcano in Seattle. We were ascending 10 hours and we went down for 11 hours. But the hardest of all was to conquer Kilimanjaro and I am so happy the Lord helped us to conquer it and gave us this opportunity to tell people that kids mustn’t live without parents. Our world will be better if each abandoned kid will have a loving family.

Tell about the purpose of your trip and nearest plans in Sacramento?

God all the time does miracles in my life. One of those miracles was meeting an amazing woman of God Tatyana Pekun during the missionary trip to Africa. When she talked to us Gennadiy Mokhnenko’s sons – editor’s note), she said that she would always be happy to see us if we come to the US. My US VISA will expire in January 2015 and I decided to send an email to Tatyana and to tell her about my desire to come to the US to take part in the casting for the American soccer team. Tatyana and her husband Victor gladly met and received me providing me with all necessities. I thank them cordially for that.

My Dad has a friend Sergey Ivannikov ( the owner of Russian American Media), and he helped to arrange the meeting with the manager of the soccer club Sacramento Surge —  Ryan Hopping. I was selected and has become a part of reserve team so my team number is 10. Also in 14th of Dec Sergey Ivannikov arranged casting for me in soccer club Sacramento Republic FC.  I believe I will succeed in it. If this dream of mine comes true it will be the best ever miracle and present for CHRISTMAS!

Imagine you have a wand to wave and with it you could delete three things in the world. What would it be?

If I have imagined myself to be a magician I would have changed not 3 but 4 things in the world system. I would exclude war, alcohol and drugs and corruption. I am sure without those 4 things there would be much less deaths in the world. And also I would love to help my Dad to build the building of our church in Mariupol. Many people help to do that but it is still not always enough to be able to continue the work. I am very proud of my Dad since due to him thousands of orphans all over the world found families. If not for him I would die of drugs or be somewhere in prison as many my friends from street.

What would you like to wish those peers of yours who will read this interview?

I want to wish them to find right surrounding, true friends, for whom it will be cool not to drink and smoke but sports, education and achieving goals. I also would like to call them to help others. Good always comes back to you. I saw it many times in my life. This year I am privileged to take part in the event organized by the company Russian American Media – Christmas lights for destitute kids. I am excited about the event which is taking place in the 9th of December.