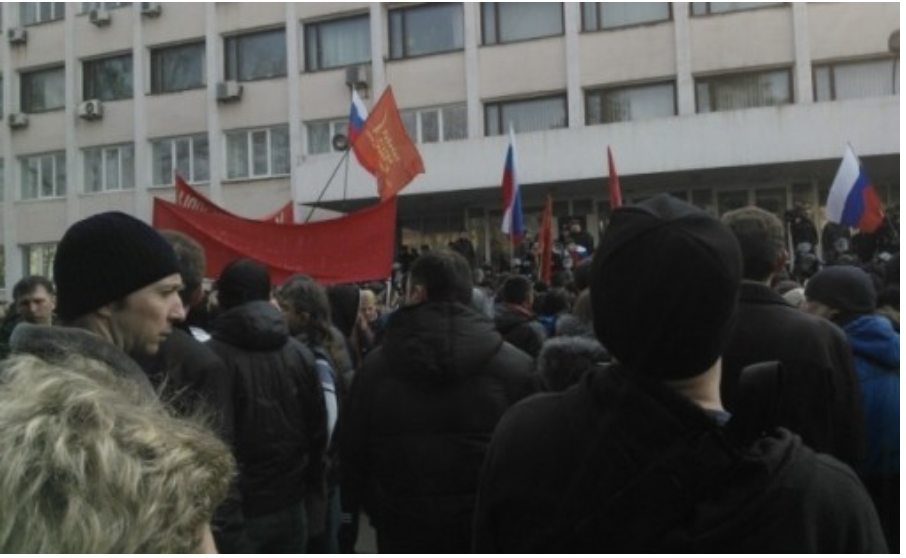 On Saturday afternoon, five American filmmakers, a German tourist, and three Ukrainian assistants were attacked in Mariupol while filming at a pro-Russian rally gathered at City Hall. They barely escaped with their lives. I am one of those extremely fortunate Americans

We came to Mariupol on Wednesday as a group of six to wrap up filming a documentary “Gennadiy” about a local children’s orphanage and rehabilitation facility. On the way back to our hotel after shooting an interview in Mariupol’s suburb, we decided to film the rally, which took place just several blocks from where we were staying. Russian flags and Soviet banners lined the city steps and a megaphone boomed professing Mariupol’s support for the Russian President Vladimir Putin. Gennadiy Mokhnenko, a pastor and the orphanage’s director, accompanied the film crew to the rally. The group was composed at that time of two cameramen, the director, the sound mixer, the producer, two assistants, and myself—a Russian-speaking interpreter. Attending the “meeting” was, admittedly, a terrible idea. We garnered immediate attention from the crowd, though the attention seemed positive at first. The driver, the tourist, and the local interpreter stayed in the van as we went to film. The crowd, as we estimated, was anywhere from 300-500 people deep. Of the many anecdotal comments we heard, the funniest came from two women who scolded us for arriving two hours late to the gathering, which they claimed to be much larger at the 11:00AM start time. “We are locals, and we support Russia!,” one woman told me, adding that she can show me her papers to prove she was Ukrainian in an attempt to curtail rumors that pro-Russian rallies are organized and led by Russians making their way across the border. The atmosphere was tense, but relatively peaceful, and remained this way for about 5 minutes. The crew began to filter through the crowd to capture as much of the crowd as possible. Our crew likely looked to the rally-goers as journalists, given the fact that we were walking around with cameras and a boom microphone. Rumors of us as being American journalists circulated quickly through the crowd. Trouble began when two tall gentlemen—though they were anything but gentlemen—came up to the producer and myself and lectured us on America’s role in the growing conflict and then called us “scum” and “traitors.” The producer of course had no idea what they were saying. They proceeded to cite more accusations which I cannot quote directly due to the profanity that they added to every syllable. “Maybe we should rough up you Americans,” he said somewhat jokingly, though with a tangible hint of evil. Laughing and agreeing with the tall Russians with an uneasy grin to diffuse the situation at hand, I thought it was a good idea to locate Gennadiy and suggest (demand) leaving the rally. Gennadiy and myself found the director who was shooting video at the time, and started to pull back to the van, which was now parked on the opposite side of the plaza from where we got out. Within a minute we gathered all but two members of the initial group. Cameraman Two and the assistant were on the top steps filming the rally top-down and were well out of reach. The situation escalated quickly at that point. A short elderly drunk Russian man swung at Cameraman One, who was equipped with a Canon C300 camera, though the man only clipped our cameraman. That was enough to get the entire group panicked and we picked up our pace. The producer led the charge back to the van as I trailed close behind. I informed Gennadiy that we left two people back in the crowd and he went back to look for them. Vitalik, a former street kid and a graduate of Gennadiy’s school for orphans, was with us at the time and acted as a body guard. We saw Vitalik throw himself at three men who were trailing us with fists clenched. That was the point at which things went totally downhill. Shouting and cussing increased and a portion of the crowd, mostly men, broke from the main rally and started to chase after us. A shout provoking the crowd rang out—“They’re Americans! Americans!” At this point we were sprinting to the van, but the crowd caught up to us quickly as crew members were carrying cumbersome and heavy equipment.