My Documentary Crew Was Attacked in Ukraine for Being American 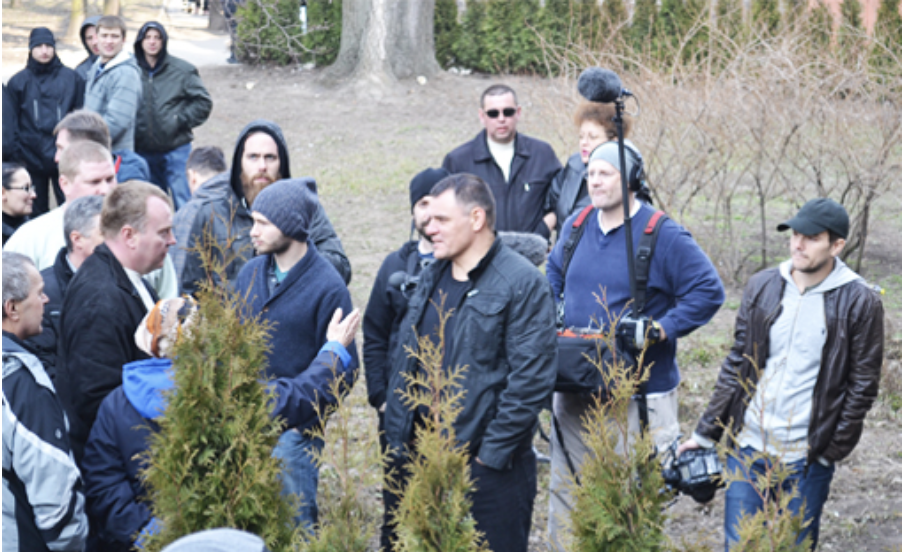 By the time the tear gas filled the van, I had already covered my face with my hoodie. I could feel tiny shards of glass in my mouth. The windows had been smashed. My friends were screaming. All I could think was, Am I going to die?

As stupid as it sounds, I didn’t think anything bad would happen to us in Ukraine. Our crew had been here twice before, for the documentary about an orphanage we were filming in Mariupol, a city far from the turbulence in Kiev and Crimea. People on the ground were telling us things were peaceful, and it appeared that the violence was isolated and perhaps being sensationalized by the media. I had to finish the documentary before all-out war ruined our chances of returning. It was a risk but, it seemed to me, a small one. We would avoid rallies. We weren’t looking for trouble. This happened last Saturday, March 15, the day before the vote on the Crimean referendum for independence. We had just finished filming a crucial scene in a prison. A man named Gennadiy Mokhnenko, the subject of the documentary, was in the van with us when we came across the remains of what had been a pro-Russian protest hours earlier. We thought it could be valuable B-roll, but we were really only interested in how this struggle affected Gennadiy and his work with the orphanage. The crowd was small and dwindling, but we approached with caution anyway. I filmed some shots of police, a lady playing the accordion, some images of flags. I was satisfied and ready to move on. When I exited the area to regroup with the rest of the team, I found Gennadiy engaged in what seemed to be a heated conversation about us. We, a group of Americans, were personally being blamed for the events in Kiev’s Euromaidan. Our friend Filipp, who was translating for us, said that it was definitely time for us to go. We walked away as calmly as possible. The insults grew louder. Someone had heard my name and started walking next to me, repeating it over and over: “Steve, Steve, Steve.” Gennadiy doubled back to get our friend John, who was still filming. One of the men who was insulting us reached out and grabbed Filipp by his shirt. Filipp managed to break free of his grasp and yelled one word: “Run!” In a moment, everything changed. The crowd that had been standing around, listless, half-interested in the waning protest, was suddenly a mob, running toward us. They had procured weapons—baseball bats, tear gas, makeshift clubs—from seemingly nowhere. It’s a sight I’ll never forget, one that felt more like fiction than reality. We sprinted for the van, dodging cars across a busy street. All six of us scrambled frantically to get inside. As I jumped in, I was kicked from behind by a protester. I could see Vitalik, one of Gennadiy’s men, fighting with protesters, trying to push them away from the van, punching and being punched. The sound in the van was deafening. We were being struck again and again and again. Natalya, a woman we were working with, was pulled out of the van, but we were able to pull her back after Fillip shouted, in Russian, “She’s a woman! She’s a woman!” Vitalik stretched his breadth across the opening of the van, doing everything he could to prevent anyone from entering. He received punch after punch, and he was being sprayed with ink. His shirt was ripped off and his face and body were marked red. It was nothing short of incredible to watch a man you barely know defend your life. The van’s windows were breaking all around us. I was sure they wanted to kill us. I didn’t know where John and Gennadiy were. I didn’t know if they were even alive. I remember standing up at one point—if it were a film, time would have slowed down. I thought how strange it was to be in that position, how stupid it was. Why was I even here, about to be killed by a bunch of angry Ukrainian strangers?

Shattering glass pulled me back to the reality of the situation. I was telling our sound guy, George, how sorry I was that I convinced him to come on this trip when he had a pregnant wife and a son at home. Just as our driver began to move, someone reached in and grabbed his arms, turning the van so it hit a parked truck. Another hand reached in to spray tear gas as others continued hurling objects against the windows and walls. The van was being destroyed. The crowd started rocking it back and forth, trying to tip it onto its side. Our tires were slashed. Somehow, our driver was able to break free and take control of the van. We pulled away, but only drove a few feet before the mob caught back up with us, smashing more windows and leaving us no option but to push our luck in the traffic. I picked up a camera to shoot and was happy to see that both C300s had been rolling the entire time. They were on the floor and only recording audio. I looked out of a hole in the back window to see a small red car filled with men dressed in red. The car began to pull around, and Filipp shouted to get down. They shot out one of our tires with a small, homemade gun, but we got away, driving on tire and rims. We ended up at a police station and were met by John, Gennadiy, and eventually Vitalik. Miraculously, they had all escaped. We were then escorted to a back room at the airport, where we waited 15 hours for a last-minute flight out of the country. Even as I was leaving, I wanted to go back and film, but I knew we had tempted fate enough for one week. Those last hours in the airport, Gennadiy talked about preparing for the potential war. He spoke about buying supplies for his family and the children he cares for at the orphanage, and how he will teach them to grow crops and fend for themselves in whatever world they wake up in tomorrow. That night he called his wife and asked her to take their many children to another home for a few days, in case anyone decided to retaliate. “Tomorrow, we might wake up in Russia,” he said. We got on the plane. That day will be with me for the rest of my life. The way complete strangers decided to hurt us for reasons neither I nor they will ever completely understand. And the way other people like Vitalik and Gennadiy, also nearly strangers to us, fought to defend our lives with their own, when we were too weak and scared to defend ourselves.

Video footage we shot before the attack, followed by audio of the attack  –