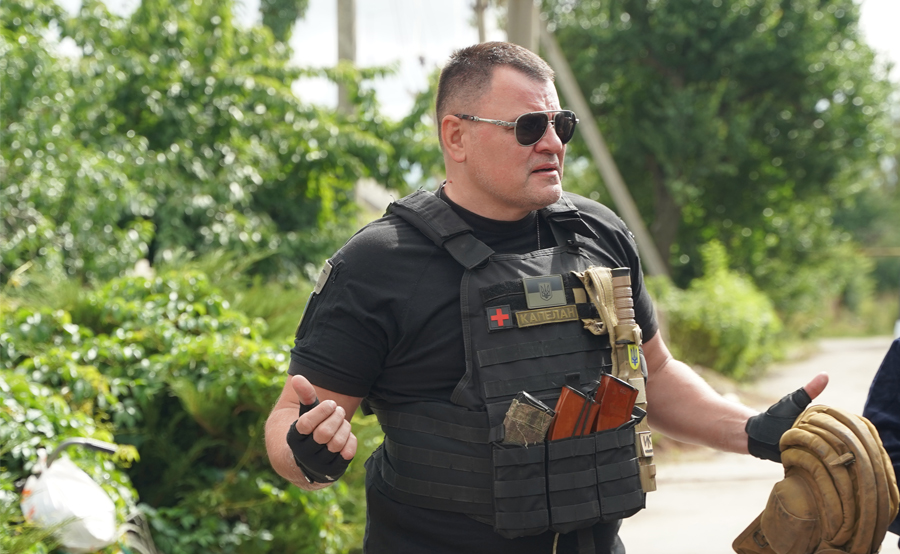 Ukrainian philanthropist and pastor Gennadiy Mokhnenko, who devoted his life to the rehabilitation of homeless children, addressed to the all mothers in Russia on social media.

“Your sons, now en masse, in a large-scale war, can be thrown into the hellish slaughter war started by the Kremlin,” the appeal says. “In that case, even I, the priest, would have no choice. I will have to stand up for my children and also take up arms. Therefore, I decided to turn to you and ask … Do whatever you can before it’s too late. State your position. Raise your voice. Speak out against this madness!”
Mokhnenko mentions that he is a Russian-Ukrainian, that his mother is from St. Petersburg region, and his father is from the Kursk region. “Russian is my native language,” he continues. “I grew up reading Dostoevsky, Chekhov, Bulgakov and Solzhenitsyn.” (Russian writers)
Gennadiy Mokhnenko and his wife Olena have three biological and thirty-five adopted children. Mokhnenko runs the largest in the former USSR children’s rehabilitation center for the homeless children”Pilgrim Republic” in Mariupol. According to him, more than 4,000 vulnerable children, including those with drug addiction, have been passed through the center. It provides homeless children with shelter, clean clothes, decent food and the hope that they will be able to give up drugs and alcohol addiction and return to a normal life. Some of the guys in the past are longtime drug addicts infected with AIDS. Mokhnenko is known as the initiator of the public anti-drug movement “Sick of it!”

Inspiring people to adopt orphans, a few years ago, together with his kids he traveled around the world by bicycles, they were cycling around our planet, including through all of Russia from Kursk to Vladivostok. The bike tour was called “World Without Orphans”
At the Tribeca International Film Festival in New York in 2015, was shown a documentary “Crocodile Gennadiy”, the film was dedicated to Mokhnenko and his humanitarian work. The documentary was created by the Americans: director Steve Hoover and producer Danny Yourd. One of the executive producers was the cult American film director Terence Malick. The final version of the documentary at the American box office was called “Almost Holy”.

The documentary is about the bright and complex figure of the pastor of the “alternative” “Church of Good Changes” Gennadiy Mokhnenko, who started a shelter in Mariupol for homeless and “problem” children and teenagers and the shelter operates independently of the state health authorities and child custody.

At one of the documentary screenings, where the author of these lines was present, and when the end credits rolled across the screen and the lights came on in the hall, the audience stood up in unison and applauded for a long time. The director of the documentary, Steve Hoover, and Gennadiy Mokhnenko, who had come to New York specifically for the premiere, appeared in front of the screen.

“Let the viewers evaluate Gennadiy and his deeds,” the director of the film, Steve Hoover, emphasized “We do not insist that he is perfect … It’s impossible to show the hero in its entirety in one film.”

Today, in the midst of a large-scale war that has come to the Ukrainian land, Gennadiy Mokhnenko gives all his strength to help people on the front line. This is an undeniable priority for him. His social media accounts give some insight into his specific works. He also uses them for commenting on the progress of the war.
“We work at the front line every day,” Mokhnenko posted on Facebook. – We continue to evacuate people, we deliver what is necessary for the defenders of Ukraine. We support those who find themselves in critical conditions in the war zone. Was serving with one of our chaplaincy teams on the eastern front line for the last two days.”

Here is Mokhnenko’s post on Twitter: “Working in the zone of Russian shelling and crazy destruction. Driving on the roads between sticking out of the roads unexploded Russian “grads” rockets and mines. We delivered the necessary humanitarian aid to the elderly people, who have been living in destroyed buildings and basements for half a year.”

“On September 1st, barbarians from Moscovia hit two schools in Druzhkovka (Donetsk region) with aircraft bombs,” Mokhnenko reports on Facebook. “There was no military there at all. No himars and abrams. They just hit the schools. Just with bombs. Happy knowledge day to you, rashists! You will still have to find out what the words “reparations”, “tribunal”, “de-occupation” mean … “
“Fathers and Mothers in Novosibirsk, Yekaterinburg, Vladivostok, St. Petersburg and Moscow, in every Russian city, DO NOT BE SILENT,” Mokhnenko said addressing to the mothers in Russia. – “Stop the Kremlin cannibals! Don’t send your kids to the meat grinder. … In these troubled days, I, like many of my fellow citizens, enlist in the territorial defense forces of my city. Ukrainians, if the Kremlin does not stop, I will defend my children and my Freedom. The price can be very high. But Freedom is never given for free.”