Former street kids from Ukraine serve street kids in Africa and the Ukrainians are in a Russian Obama hospital! 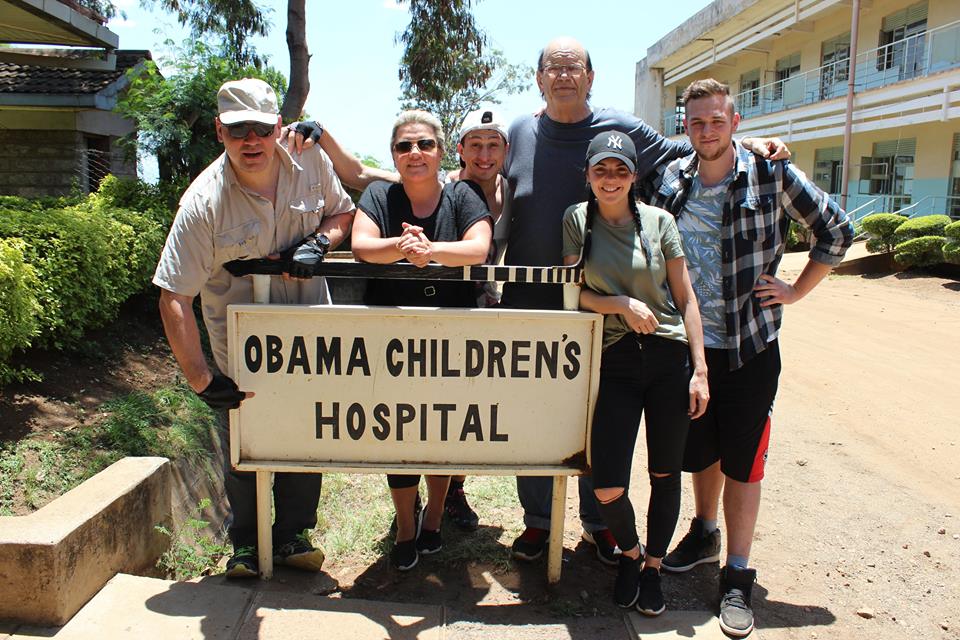 Every year someone from my adopted kids is with me in my trips to the edge of the world. This time Sasha was given the privilege to be with me in the missionary trip. He was a street kid from an early age, he was abandoned by his Mom, his biological Dad was a drunkard, he would roam the streets and obscure dens all his childhood. And at the age of 14 he crossed the threshold of the “Republic Pilgrim”. As I had discovered then he didn’t know a single letter but already in 3 months, when he was almost 15 he proudly could read his first word “ABC”. And then within 3 years he took a school program of 9 years. Sasha studies in a vocational school now, has a part time job and is seriously engaged with bodybuilding. The last fact brings delight to the local kids in the orphanages. Sasha is incredibly sociable and open – hearted, he is fun.  He immediately finds the common ground with both kids and adults. His testimony about how God changed his life when he was adopted, about his present purpose driven life and about his dream to do with the elements of show of force works very well. I don’t remember, son, whether I told you that or not but I am so happy you are with me!!!

The next 2 days we spent in the third in size city of Kenya – Kisumu. Kisumu is a home land of the father of the President Obama. Almost everyone here is certain that they are the nearest relatives of the president of the USA. The sings with this almost magic name Barak are everywhere here. But special experience for the Ukrainian team was serving in Russian Obama hospital!!! Would you agree there is kind of symbolism here? This building had been built by Russians long ago and the term “russian” came from there. We distributed here foods our team bought and served Moms and kids. All our team was washing their feet and putting on them some special ointment.

When you are barefoot on dusty roads it causes a whole lot of problems in this area. A bunch of deceases, harmful mites and worms ” doo-doo ” , cracked and decaying skin on feet – really dramatic moment for this place. I think that they will remember forever the white people washing and putting ointment on the feet of the black patients of the hospitals with malarias, anemia etc.

The stupid fish, the lesson from the hippos and man- eating worms and the washing and the shower – 2 in 1!!!

After saying good-bye to Kisumu, at the sunrise, we drove along the legendary, beautiful, but very problematic Lake Victoria…  Second in size in the world, the largest in Africa, this most beautiful oasis – ala has an ambiguous reputation…

The fishing is fantastic, and it is really helpful for the survival in the desert areas. However the lake is treacherous even for the fisherman (there are legends of tornadoes that destroy people) and for coastal residents.  Swimming is forbidden here. Mad fish (literally mad one) attack men like a mad dog and its grip like of piranha is hard to disengage. Also a worm causes a lot of problems when gnawing at human body. And the special issue here is hippos; they cause more deaths than any other animal in Africa. They go to pasture at night and come back in the morning. And vow to those who got to their way. The local children when seeing me trembling of fear at the word “hippo” taught me a lesson of survival at the hippo’s attack. But for those who already got ready to make notes I have a bad news…. They are not free from me!!!))) But I  can do a discount…))) Good bye, Kisumu, bye lake Victoria… See you, the team “Mission Assistance”! Your slogan is right – «Compassion is no substitute for action !!!”

On coming back to our base after +40 degrees Celsius (102 degrees Fahrenheit), after dusty roads and strong emotions it’s worth to unite these two procedures.

The economy of power, time and space (there is only one shower for quite a company of people))))

Our team moved from Kisumu to Kitale.

We are working at the new place now. The program is extremely busy (as though we had less busy ones))) yes, we get tired, but every evening we realize that the day was not lived in vain!!!