Latvia must become a country without orphans 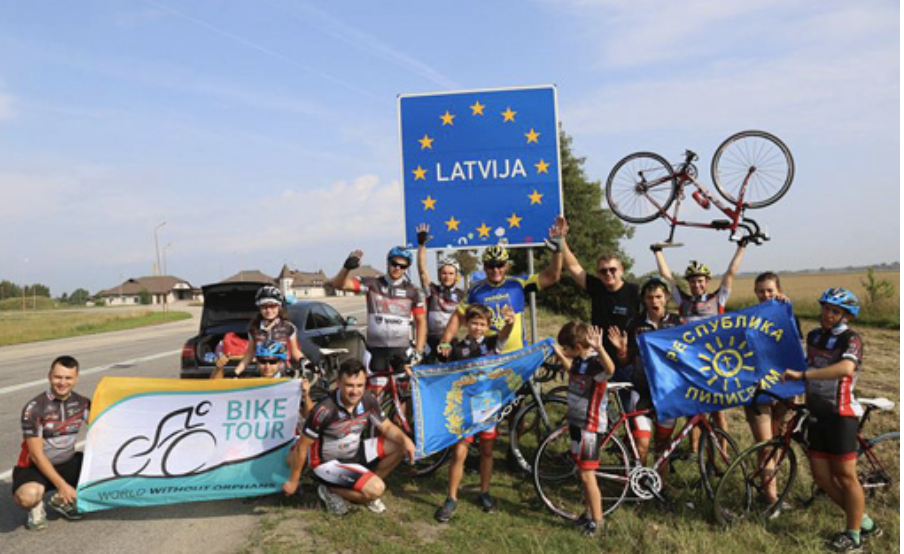 At the end of this week the group of cyclists rode into Riga within the worldwide journey under the motto” The world without orphans”. All of them are former street kids who once were fostered by the pastor Gennadiy Mokhnenko – the founder of the largest in the countries of CIS children’ rehab center “Republic Pilgrim”. As the priest shared in the interview to the program of the Latvian radio 4 “ day by day” his purpose here is to debunk the myths and stereotypes about adoption that exist in the Latvian society

Their tour started from unbelievably far Vladivostok. They have 10376 miles behind them and they are not going to stop. One of the partakers of the bike tour named Roma, 17 years old, used to be a beggar on streets. Today he is a champion of Ukraine in boxing.

“This wonderful personality, a champion of Ukraine in boxing, I had found on street when he was only 5. He was wondering around crossroads since he was 4. It was dark, I was on the crossroads, 2am, he was 5.  – Can you give me a penny?  I said to him: Sit into my car and I will give you money”. The boy jumped in and I blocked the doors In response I heard:” NO!!!!!!!” Then he started trying to break free and breaking windows and doors. The taxi-driver started following me, he cut me off and jumped out of his car with a stick. – he thought I stole the child. I opend the window and he recognized me: “Oh, pastor Gennadiy! Thank you, good luck in your work with street kids” And we went on intot he new life. And now he is a champion of Ukraine in boxing”.

In total Mokhnenko (who used to be a street boy himself due to the unsafe family he grew up in) has 32 adopted kids! The pastor has 17 grandchildren from them. However, Mokhnenko doesn’t set himself as an example since not everyone can take so many kids under his guardianship. The main message of the priest to the society is to adopt at least one kid.

“We encourage people to adopt children. We believe that kids must live not in orphanages but in families. Each child must have a father and mother.  All the children when they wake up must hug their mom and Dad instead of the breech cushion of the orphanage! We are funs of adoption. I am a father of 32 kids but by no mean I demand of anyone to adopt as many kids. My situation is abnormal, it is not how it is supposed to be – my kids are mainly former street kids. But we believe that it will be enough if every good family takes just one child and then all the orphanages will be emptied. For each orphan in Latvia there are a few thousands of wonderful families around. Who can tell me that this issue can’t be solved? Something simply needs to be changed in the motivation, in understanding of the problem of orphanhood. – the activist shared.

His team Mokhnenko called The Myth Busters. He saw many examples when people changed their attitude to the adopted kids and became happy parents.

“We break the stereotypes about adoption. For instance, if one popular myth be broken in Riga the number of kids in the orphanages will decrease twice.  This myth is “Will I be able to love this child as my own?”.  Many people think that it is hard to love an adopted kid. You can see on my lap my 32nd adopted kid. I love him just as much as I love my own (biological son who is a bit younger). He has become my own! And thousands and thousands of adoptive parents say the same thing. And one more myth is genetics. They are the children of alcoholics and drug addicts. – they say. Bad genes and heredity will emerge for sure. Listen, I am a son of alcoholics. I have been priest for half of my life now and I am an adoptive father for 32 kids. One doesn’t become alcoholics by the genetic attribute. It is just not true, it’s a lie, it’s nonsense! They are talented, gifted, they are great! Do not be afraid! If you can, take an orphan into your family, – Mokhnenko makes a call.

He recognizes that for now unfortunately the graduates of orphanages and boarding schools often become outcasts with broken lives.

“The statistics in orphanages is extremely horrific. To be honest they don’t like to mention it at all but the numbers are awful. The graduates of orphanages are a catastrophe. Only a few of them create normal successful families. But by no means it is because something is wrong with them. It is with us, adults, something is wrong. Kids found themselves in orphanages not because there are second class kids or because they are defective. They are talented, gifted. One example – Roma. He is gifted in sports, he is a champion of his country.