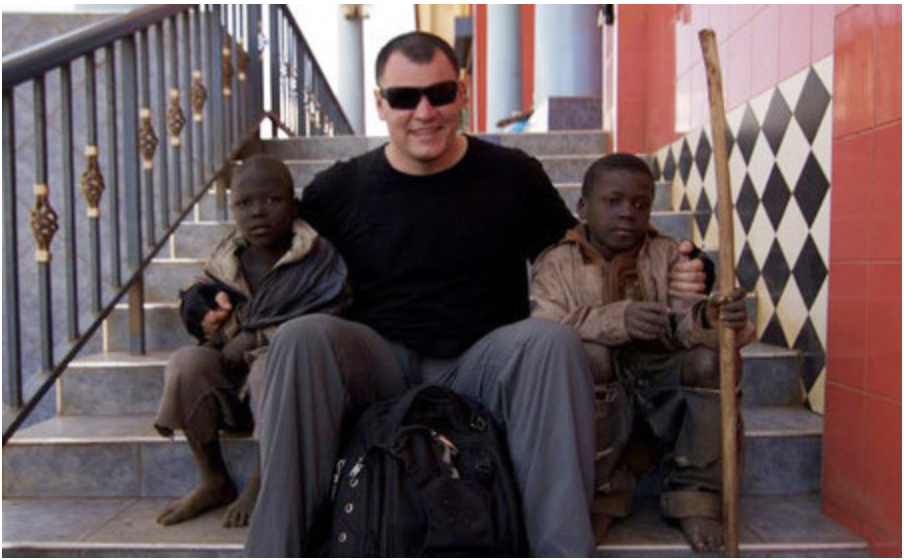 After we had breakfast we started immediately to the Uks (Ukrainians) - the team of our missionaries. We have brought donations for them and shoot a video for the program "Mission is possible". When I am home I will tell about the achievements of these amazing girls from the Ukrainian team in a series of TV programs.

After visiting the Uks we came around to a place – the solemn moment – one of Steve’s adopted daughters gave birth to a child! The moment of celebration – First black granddaughter of the granddad from California!

The part of the team (Sergey and Hannah) had started in the early morning to buy cows for multiple children poor families. This project has been called “The Holy cows” here. 6 families received milk factories and cement factories at the same time since the cows’ feces are widely used here as building materials.

The basic team headed to the city center of Kitale to buy food for the people in the slum. Here, in the very center of the town we were as always attacked by the local street kids and had an operation under the title “exchange a bottle of glue to 3 slices of bread”. There was an incident. One strong big boy took little guy’s portion and ran away. The attempt to catch him wasn’t successful, unfortunately.

We noticed one little boy who looked like he didn’t belong to the place. We picked him up and took him with us. We got to know from him that his name is Atot and that he got here by hiding under the floor of a truck and the way here took him 12 hours. We decided to clean him and to send him to the Christian orphanage. It has become an annual tradition in this very place by this very shop to take one boy and to send him to the orphanage. It strongly reminds me the Bethesda from the New Covenant.

After that we went to the Kipsongo slum where we were distributing what we had purchased before. The local pastor did his best to organize everything but the crowd that pressed on us made it hard to put the process under control. At a definite moment Steve made a decision to evacuate the whole team from the slum but we still managed to take the situation under control. What helped I think is that some of us had really wide shoulders and strong fists (in comparison with those of locals) and our sizes were obvious even to a drunken population of  the Kipsongo.

After visiting the slum we went to the hospital to see sister Freeda. Steve and I got there with the help of piki- piki (local taxi motorcycle service). We brought a guy with us whose leg started decaying and they started operating him right before our eyes. They were trying to fix it without amputation. The man is 25, he can’t feel any pain, even when they literally cut of a piece of his muscles he was eating something disgusting and didn’t seem to react.

On coming back to our base we started making our traditional special missionary borsch. This time the responsibility to make it was taken by sister Tatyana Abashina.

While the borsch was being cooked I went to meet the manager of our partner orphanage “Oasis of Hope”. Jeff and his wife have been working with the local children for years now and as it seemed to me they are a bit burned out and this is why they were ready to give up. But as always help and support comes just in time. We gave them help from one Russian church and from The Republic Pilgrim. I could see tears in the eyes of Jeff and Olivia. And at the same time the children from the home were full of joy. At one of the T-shirts that were given to them we saw the sign “Don’t give up” and it was symbolic because we kept repeating this very phrase to them before.

In the process of making supper there was a show. For the first time in his life Denis Demidovich was milking a cow (if only his Dad could see it)! I would give much for just seeing the expression of his Dad’s face right now reading this news!

In the evening after luxurious borsch we were celebrating Oleg’s birthday – Oleg is a pastor from Belarus. The sisters did their best and organized a good party! Frank talks and very important for the whole team words… This time before going to bed is so precious, it flies 5 times faster. We have been having too many experiences within these last couple days. As always I fell asleep within 3 seconds. It was a good day. Minus 1 on the Earth – plus 1 in heaven!