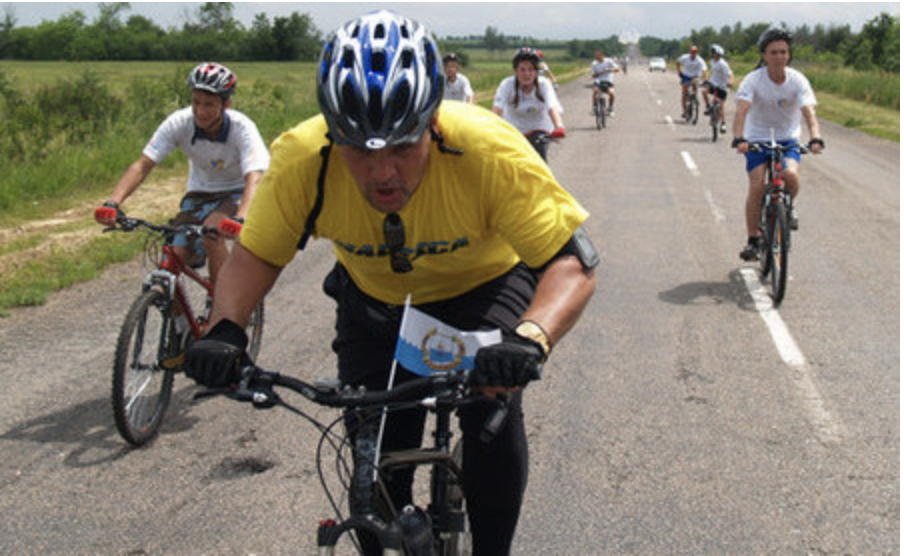 On a day of prayer for the orphans in the "Church of Good Changes" pastor Gennadiy Mokhnenko presented a new project- of bikes cycling action "World without orphans." Pastor Gennady along with former street children, his adoptive sons and children from rehabilitation center "Republic Pilgrim" is going to go around the globe by bicycle.

The aims of the project • Inspiration and motivation of people to form family-type homes from orphan children •Creation and presentation of information events in order to eliminate children abandonment in the world. •Education and destruction of the negative myths about adoption •Identify partners and support the work of the charity fund “Pilgrim”

In the summer of 2011 adopted children and their parents made a thousand kilometers bike ride in Ukraine with the slogan “Ukraine without orphans” under the auspices of the same name of the Alliance. They rode bicycles from Mariupol to Kiev capital, through many major cities of Ukraine. In each of these cities children and adults told people about their dream – Ukraine should be without orphans. You do not need much – just decide for yourself what all children deserve to be happy, and to make it happen for at least one child. This bike tour was the first step in the upcoming round the world bicycle action.

The new call is for – “World without orphans” – is outrages and unprecedented event, but pastor Gennady, together with kids of the “Republic Pilgrim”, and his adoptive sons, believe that this action will raise awareness, and can help eliminate this problem.

In May 2012 a group of cyclists will start from the Ukrainian capital of Kiev toward Moscow. The tour will pass through the city of Kursk, Orel and Tula. From Moscow, travelers will move in the direction of Yaroslavl and Nizhny Novgorod.

In August of 2012 children from foster families with their parents are going for a half of Europe. Starting from Kiev to Warsaw, Berlin, Amsterdam, Brussels, Luxembourg and will finish in the German city of Stuttgart.

Accordingly, in 2013, and annually team plan to overcome the distance of several thousand kilometers, alternating trips to Russia and Europe. According to our rough estimates cycling action will last for 4-5 years. Circle will be closed in the U.S.

During the world tour children, along with pastor will be serving in hundreds of churches in the most remote parts of Russia, Europe, Canada and the U.S., to inspire people to open their hearts and homes for orphans.

It should be noted that the students from the “Republic Pilgrim” acquired considerable achievements in sports. In 2008, they conquered the highest peak in Europe – Mount Elbrus, in 2009 – the famous Mount Ararat, in 2010 a few boys with pastor Gennadiy traveled by grand Lake Powell, the hot deserts of Utah and Arizona, and also conquered the peak of the dangerous American volcano Reiner. Pilgrims also have extensive experience in whitewater rafting.

Already in mid-November, a team of cyclists will begin active preparations for the forthcoming tour around the world. Kids and adults under the guidance of experienced coaches will be physically ready for bike ride, doing to the gym, doing a daily multi-kilometer runs, and with be ready to start for spring. This will require them to have a considerable courage, endurance in sports, a great desire and a belief that the cycling event will be one of the heroic actions, which will be perfect for a dream – A world without orphans.

More information about the plans of Pastor Gennady Pilgrim and students can be found at:  http://republicpilgrim.org/

Communication with the pastor and the organizing committee of cycling action “World without orphans”in social networks: