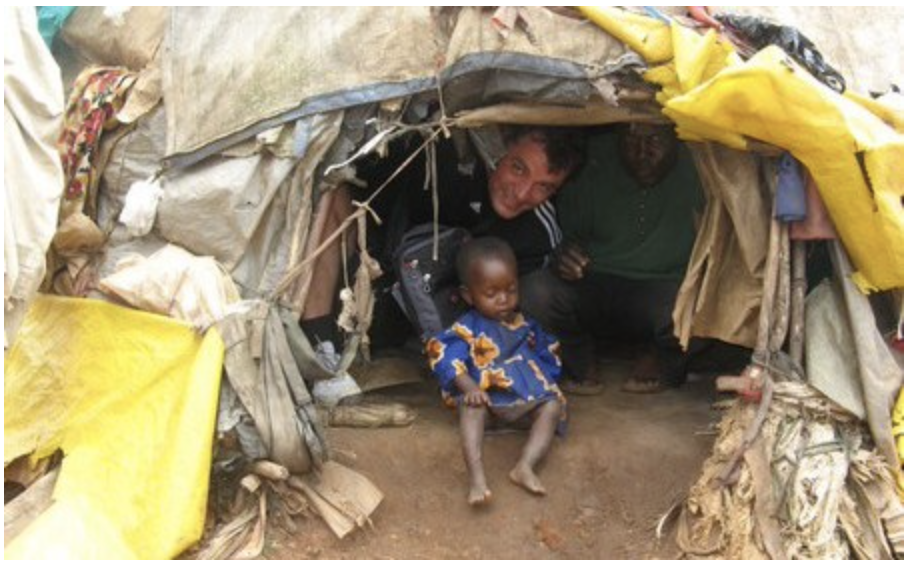 Day 6 Traffic police salutes and music masterpieces in the barn. Dancing of ushers and the percentage of “bikes” among children. The fight for cookies and a guard with a whip.

Sunday. In the morning Steve recommended me what to wear. How surprising it can seem I had to wear a suit. I put a shirt without a jacket on. Instead of habitual pastoral shirt I put on the colorful African “almost like our national fancywork” shirt….. We’re going to the church.

First that strike the eye – a number of neatly dressed people and as well as I can understand it is namely in His honor. People walk to the Service quite actively. We’re coming to the rural church of the village Birunda not far from Kitale. Uncle John takes us from the basis. They call the pastor of local church here almost at the border on Rwanda – Uncle John!

The traffic police was intending to stop our bus but having recognized Uncle John they salute and we move on without hindrance.

On coming from the village I can’t stop being sad about the poverty reigning there. The most luxurious houses made of clay and cow dung look like shabby barns in our villages. The number of children running towards us reminds me about the absence of demographic problems in the country.

We approach the “Church of faith” (not a single association with a theology of prosperity!) where some Bible studies ate taking place, though it is a plenty of time up to the main Service. After a brief acquaintance with the local ministers we go to the baptism. The river bank nearby is becoming a place of this feasting event. 12 people are getting ready to be baptized. With dancing, singing and drum rhythm the caravan of attendees of the church is approaching the river Kimenini where the sacrament of baptism will take place. Steve is preaching and I along with the local pastor have the privilege to baptize the people

After the baptism we go back to church and the Service starts. Worship is above all praises. There’s no doubt they can sing to the Lord wholeheartedly. Using ancient musical equipment, in a clay barn I didn’t expect to hear the Worship that would take my breath. It wouldn’t be an exaggeration to say that the choir like that without any additional rehearsal just performing their habitual repertoire might have been a decoration of any European conference. There’s no electricity in the village but ostensibly they promise to conduct electricity in the nearest few years but it is not for sure. Children made a special impression on me, they look in to the windows of the overfilled church construction. After the prayer for those who have just been baptized they all greet Steve and he preaches using me as an exhibit – paralyzed from the Bible story who was taken to Jesus by his friends. I also take part in the Service with a brief Word and a prayer. At the end we worship again and my emotions get out of scale. I had a special fun during the donation service where the ushers dance with the baskets for donations.

After the Service we’re going to the Pastor’s home – the dwelling of Uncle John. He’s got 7 kids and when asked if they have a bike… I get a negative answer. When asked how many of about 500 kids in the church have a bike – the answer sounds sadly – “none”. I make a decision and right after a cordial lunch we start to the city store. I wanted to buy two bikes but when I saw how the eyes of the pastor’s son lit when he saw a bike I decide to but the third one. And after seeing the reaction of Uncle John and his team choosing a bike I decide to but 2 small bikes for the little ones. That was the gift from our Mariupol’s orphanage to the boys and girls in Berunda.

While the pastors pack the “bike – cars” it seems this word is more appropriate here than in Ukraine. I buy a box of cookies and go to “my” street African kids.

The news that Muzungu has come with gifts is spreading immediately and the kids surround me tightly. At my command they start throwing their glue tubes that they snuff into a special sack I prepared. And only after I checked that all of them threw away their glue I start distribute the cookies. I give 6 cookies per person but taking into account the size of the box I hope there will be second circle. The emotions in the line are getting out of scale. I preach as much as I can about the harm of toxic addiction while giving them the cookies, fortunately, there was a guard from the store who helped me with translation. He disciplines those who fight in the line with a whip in his hand.  As soon as the box is emptied the passions run high and my usher has to use the whip couple times to calm the impudent older kids down.

On finishing the procedure… I remind the kids about the orphanage “Oasis of Hope” where they will have a soccer match tomorrow and they plan to have some sweets afterwards. The kids promise to come. Leaving them I am glad to have a whole sack of glue bottles in my hands. It reminds me the start of our Mariupol “Pilgrim” so much… But the kids are black not because of dirt or better to say not only because of dirt.

They see me off with the shouts of gratitude: “Asanta Sana Muzungu!

Day 7
The night in hell and “Recipe of happiness” in practice. The bike in Oasis and homeless international.  To build a house and lies of a pastor-“aborigine”.

In the morning I come to the orphanage “ Oasis of Hope” and to my great joy I see there some of those who were on the street with me yesterday. They play soccer which is so popular here. I give some balls brought by Steve from California to the Principle Jeff.  The group of teens is marching ahead with a minister from Oasis. It looks like our Royal Rangers. Kind of Christian version of boy scouts.

I am asking a traditional question if they have a bike in the orphanage and getting a negative answer I give them the one as a gift from “Pilgrim” to our swore brothers – former street kids from African “Oasis”. I have a huge desire to shout on this occasion something international, something like “Street kids of all countries unite!”

I come back to the basis where Steve introduces to me a young man living in Kipsongo slum where I stirred my soul so much that fell into depressive state. Samuel is one of activists there, under his leadership there in the horrible, criminal, drunk and hungry, and as it seems, hopeless place though intimidate but still good changes take place. So he as much as he  can and correspondently if there is money for that demolishes the garbage pile tent and builds small clay barns within one – two days with slate on their roofs which are more rain and wind proof. I make a decision to build one of such houses from “Republic “Pilgrim”. Steve finances the second one. The work must be done within 2 days and it will be started right in the afternoon as soon as wood and slate have been bought.

The idea to spend night in this hell comes to me quite spontaneously growing from Steve’s joke into idée fixe. I clearly feel the necessity to try this life of African social underground as much a sit is possible for me “Muzungu”. My firm believes about Christ’s recipe of happiness impact me here a lot. For years God has been teaching me that to be happy you need to go towards pain, sorrow and people’s sufferings with Christ in heart, mouth and actions.

Steve, with a smile, supports the idea stating that he knew it: it was evident it would end with such an idea in my case. But as a skilled African missionary he gives strict safety instructions and takes guarantees from Samuel that he would protect me there.

Having packed properly under the strict guidance of Steve who turned from pastor into caring father I start to spend night to Kipsongo.

The news that “Muzungu” is going to spend night with them has been immediately spread around the slum; the interest to this unordinary event is, to put it mildly, increased. Children and grown ups crawling out of their ugly garbage pile tents watch me with interest. Little kids, regardless of the demands of adults to leave me alone, gather around me trying to attract my attention. I am watching the process of building 2 clay barns (300$ for one) sponsored by us. It goes well and tomorrow they can have a house warming party. I chat with the guys who accepted me into their dwelling up to late night. Two of them are former street kids; one is crippled former toxic addict, whose childhood was drugged. One more fellow I was talking to is married He’s got a pregnant woman here at the slum and 2 little kids. Nobody has a job. No one knows how they survive. They are hungry all the time. When asked why you don’t move to a city they laugh… and reply that none of them have papers, money necessary for that. The majority of them have no certificate of birth. To restore the documents costs much and it looks like for them to be officially registered in the world is not about to happen. Nevertheless all my familiars here attend church and at their slum they sing psalms at night with a great pleasure.

It gets dark fast moreover in the “settlement” there’s no electricity. Samuel, having found somewhere several wooden sticks tries to make a fire. He cuts a plastic tin for that. To set it on fire he is dripping melting plastic on the sticks and it smells bad.

The night is coming closer and because of the emotional overload I start to fall into nap. They make the bed for me in a royal manner: Steve gave a mattress and a blanket so that I can sleep comfortably in the mid of a horror. I refuse to try the food cooked their telling lies that I am not hungry. In reality I just can’t eat anything in such conditions. The  bad smell of this place penetrates everything and you feel bad not only morally but physically as well in such a sticky atmosphere.

I am falling asleep listening to the prayers and Christian songs of my new familiars “in Christ” at the slum Kipsongo.  Lord, aren’t you really here at the equatorial slum? The sensations are disgusting. But nevertheless I say to all who gathered around our tent “Usiku Meima!” (Good night!)