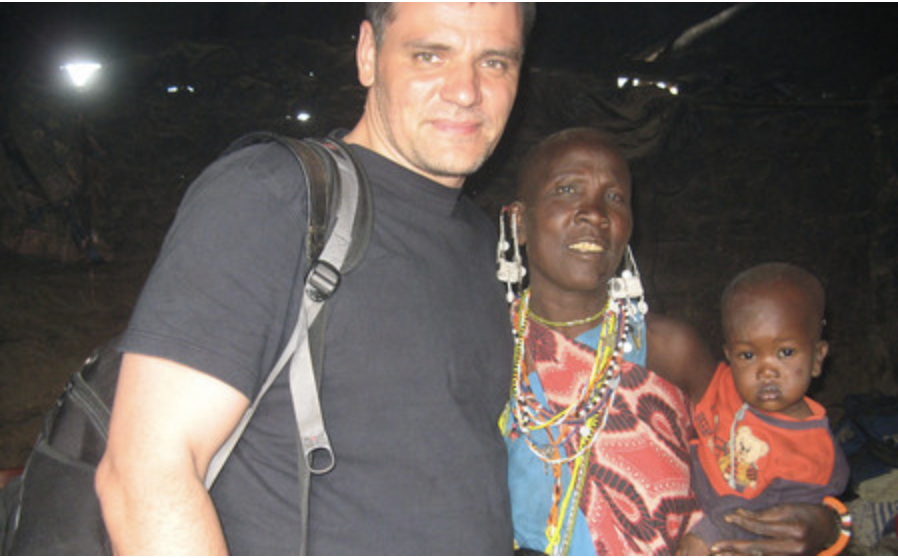 Day 8 Sunrise at slum and pancakes at zero latitude. Blood from vein instead of Coke and our rally in Masai Mara. Flies eating the eyes and arrival in Paradise!

The night I spent in this social “hell” was coming to the end. Sunrise in the slum Kipsongo surrounded by 3000 paupers, sick and in most cases people that lost any hope to get out of here  – all that will be kept in my mind for quite awhile. Bitter thoughts and passionate desire to change at least something here – were the background of that sunrise. Having said goodbye to my new friends and having emptied my pockets out I took piki piki (motorbike taxi) and started to our missionary basis. Since I ran out of money I tried to find anything in my suitcase that can be useful for my new friends. The half emptied bottle of cologne, the flash light I’ve just bought, sports gloves and some fancy things for the kids… – all these will be a great joy for those who shared last night with me at Kenyan slum.

An hour and a half left up until I am leaving our small town and since this is the last opportunity to see all the team of Ukrainian missionaries I decide to go visit them. Not far from the basis of Pastor Steve these guys rent a house and have been working in local orphanages and churches for months. They meet me with great news that they overcame malaria and recovered. I recall suddenly that I didn’t eat anything for 24 hours and with pleasure putting aside any modesty that is inappropriate here I myself with pancakes made by my countrymen. Having no much time I could get to know the purpose of their mission trip to Kenya and the nearest plans. After a brief prayer I say good bye to them but before leaving I decide to put down their names in order to say to them, simple Ukrainian guys, a big Christian and simple human “Thanks”. I express my personal gratitude to you, Ukrainian Kenyans that you leave your homes and go to grown white missionary fields. Here are the names of this wonderful team: Kumechko Olena – Zhytomir, Yatsyuk Julia, Sydii Julia, Lygun Vitaliy, Mudrievskaya Nadezhda – Ternopol, Gerbas Violetta – Dnieprodzerzhinsk, Illyuk Angela – Rovno, Korets Alexander – Mariupol. My personal respect I express to those Christian who support tham or maybe will support them in the ministry at the edge of the world. To connect with this missionary troops I am giving you an e-mail of sister Olena Kumechko elkum@ukr.net     and the phone number of Ternopol missionary institute “Heart of Help” Michael Reznik  +380673500430

By the way, about the impact of Mass Media… Before meeting the guys in Kenya, they have already known of my staying there from the first chapters of this very jounal blog that they read on invictory.org

On saying goodbye to Slavic brothers I went home to pack my stuff and get ready to dislocate.  In an hour we started to the last place of our trip – area named Massai mara. The talks about how the local inhabitants – Massai – cut their ears in an ugly manner and eat only cow milk, meat and fresh blood provoked not so pleasant associations. Moreover I heard they don’t kill an animal to get blood but just cut the main vein, take a bowl, fill it and then they sculpt the vein with fresh litter and move on to the next cow… I admit I am glad I wasn’t an eyewitness of this procedure. But my general impression didn’t improve much.
Long-lasting speedy way absolutely reminded me a rally “Paris – Dakar” I used to watch on Tv when I was a boy. Our driver and at the same time guide was brother Stonik again. He is from Massai – but rather… to formulate it correctly… “ Europized”. He is doing rather good business in Nairobi and he helps Steve in organizational questions his every trip.
We come around to the first Massai family and my heart is getting compressed into a ball again. By the road I can see a barn piled with punk and parents with some kids in it. After picturesque views through the windows I can see unthinkable number of flies that sit on kids and grown ups and literally eat kids’ eyes and it makes me wake up with understanding where I find myself. One of the boys’ eye was licking with pus. Directly in the barn corner there is an only breadwinner of the family – a goat.
The children play skillfully kicking tires with a stick. Couple years ago driving this same road Steve met a girl who was selling bananas at the parking lot. Since then he started financing her study in school. Presently Regina is a decent student and I could get convinced in a short time when she came back from classes. Coming of Steve is a big holiday and sure enough they couldn’t do without gifts. My modest personal contribution was a Bible for children I bought in Nairobi. I’ve never seen before the child that would be more surprised and interested in the book. The teens what assembled there and envied Regina as it seemed forgot about the presence of adults and stared at the Bible.
Our staying here was quite short and we went on by more radical routes, full off- roads approaching the national reserve “Massai Mara”. I was not privy to the details of the last two days in Kenya, in the very beginning I decided that I should relax and trust planning to the Lord and Steve. My entire American philosophy directed vertically to heaven and horizontally to Steve could be put into a simple phrase I repeated so many times in both directions: “I’ll follow you” It turned out that my last hours in Africa were planned as a special surprise for me and adopted kids of Steve. By the evening we found ourselves in the Paradise!!!

Day 9 and 10
An angel that took a nap and animals run away from the Ark. A wild lion at a 3Ft distance and Massai military dancing at midnight. Happy birthday and “I’ll follow you”.

After the night spent in Kipsongo hell and after tiresome and quite crazy way, taking into account the manner of Stonik’s driving, we arrived in the hotel. It was quite dark already and I couldn’t estimate the place we were taken to. But at the sunrise I truly woke up in the Paradise!!!!
I have a degree in Theology and Religion and I am very well informed that the entrance to the Paradise is closed for mortals on this Earth. I am aware of the story with an angel standing by the entrance and hindering the way to Eden for us. However, taking into account the beauty I woke up in as well as the speed and unpredictability of yesterday’s rally the version of passing by somehow the Paradise guard seemed quite trustworthy to me. In any case within my life I haven’t been able to see so many animals even in those relatively good Zoos I’ve been to. It seemed somewhere nearby the Ark of Noah landed and the animals of all types scatter around the world from this very place. And the fact that some of the animals were represented in much bigger quantity that “each creature in pair” conjured a thought that they went out of the Ark long ago and fulfilled the commandment  “be fruitful and multiply”. Steve conspired with Stonik to organize for me and adopted kids from Rwanda a real Safari!!!

Elephants, hippopotamuses, lions, crocodiles, leopards, giraffes, hyenas, ostriches, buffaloes, roes, zebras, boars… all these and much more I could see during the last 2 days of my trip. By the way some of them as for instance, one of the lions were at arm’s length from me. Please, note that this figure of speech in the given case should be perceived literally. At 3Ft distance from my palm like a photo model on the podium “a king of animals” was lying ignoring completely the presence of tourists and flashes of cameras. If there’s the hell on the Earth I saw him in Kenya, if there’s Paradise – it is right there!
One day before my flight back to Ukraine It was Steve’s birthday. His adopted kids and I bought a picture with a lion and his cubs following him. Taking into account the height of Steve his Rwandan guys look just like cubs. Sharp at midnight this “little elephants” surrounded the tent of their adoptive father who has just gone to bed and started Massai dancing with burning candles and peculiar intimidating growing strains of the “Gu … … gu gu gu .. …!”  After that the notorious “Happy birthday” sounded. All of us signed the picture and agreed to write a sign expressing my strategy in the trip “I’ll follow you!”

Epilogue
Thoughts by the Gate No10

Safari and my whole trip came to the end. We arrived in Nairobi where a big group of missionaries from the US has started coming sure enough by Steve’s invitation.  They will start to the same basis and will make their missionary to some extent exploratory and sometimes military sallies. To prove the fact that the atmosphere here doesn’t permit to relax we heard the news about the robbery taken place at Steve’s basis. The lock was broken, some mattresses and some trifles from apparel were stolen. But I am quite sure no problems would hinder new missionaries to get involved into this fight of The Christ with darkness going on all over the world up to its edge: up to equator, up to Kitale town, up to Kipsongo slum…

In the airport by the gate No10 I started my birthday. I went on its celebrating while switching flights in Istanbul and then landing in Kiev and this day finished on Ukrainian “highways” towards Mariupol.

There, by the exit from Kenya by the gate 10 and by the exit of one more year of my life sure enough I was thinking about lots of things. No, don’t even expect I am not going to tell you about all of them… there are a number of too personal things… but one thing I’m still going to reveal! I was thinking how Great, Holy and Humane is my God!!! I was reasoning how I personally can contribute to the work of the orphanage “Gilgal” and “Oasis of Hope”, for the people in the church of “Uncle John”.  I fancied what “Church of Good Changes” and “Republic “Pilgrim” can do to help the children in Kipsongo!
And also there by the gate No10 I was thanking my Father that He’s faithful and through His disciples He came with the Gospel to the edge of the Earth and that I can be among those who in this procession of the Word on the planet, take some, let it be modest, part.
Thank You, Jesus, that You’re here on the equator! “I’ll follow you”.