Pastor- Pilgrim from Mariupol is the father of 38 kids and the grandfather of 26 grandkids. 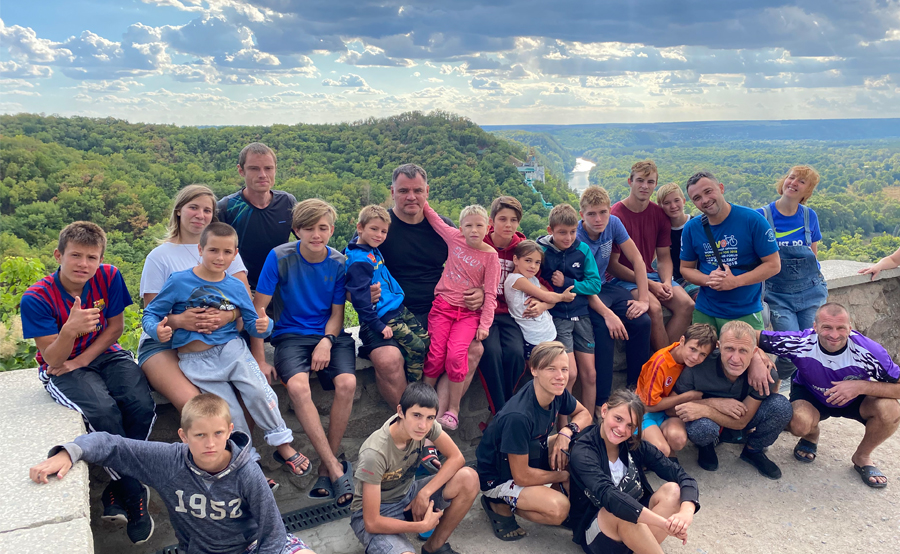 Pastor of the church and head of charity fund "Pilgrim" of Mariupol, Gennadiy Mokhnenko, is the father of 38 kids. The pastor has three biological and 35 adopted kids, " The Hromadske radio" reports.

“We have just started the paperwork for the adoption of our 35th child. Over the years I have 35 adopted children and three biological ones. Now I have 9 guys who live with me: 6 of them are youth and three are adults, ”  -Mokhnenko said.

He already has 26 grandkids from his adopted children.

Gennadiy Mokhnenko founded in Mariupol one of the largest rehabilitation centers for street kids in the post Soviet space. Its name is “Republic Pilgrim”. It originated in the 90s and over several decades it has become a haven for thousands of children.

“ At that time I was already a priest for several years, and it happened so that we bought a facility in the city center – 500 meters from one of the busiest intersections in Mariupol. Dozens of homeless children lived there at that time, they lived there for years, ” – the pastor recalls.

These children lived in sewerss, under roofs and in basements. They started helping them with small things – giving some hot food. Parishioners brought th kids home made food which became a daily meal for the young homeless kids.

“As I started to work with this I saw the cut veins of children. I saw that at the age of 10 they at times had no living space on the veins because of drug injections: neither on the arms nor on the neck. When we saw and got to know them, we saw these people who are dying from AIDS, daily crime, violence, we began to feed them and to talk to them. Once they came to our building where we were planning to have our sanctuary, asking: “Can we live here?” Of course, we could not refuse them. They settled right there at our church construction site, ”says Mariupol.

“The first ten kids, then a few dozen more, and finally, hundreds of children,” pastor Mokhnenko recalls. This is how the Republic of Pilgrim was born, and its inhabitants still call it the state of former street children. Here thousands were “liberated” from the street life and addictions- some got freedom by their own free will, and some were taught normal life by force.

“We started taking them from streets, taking care of them, pulling them out of drugs, giving them treatment, taking them to hospitals, restoring their documents, finding out who they are. More than 4 thousand children have passed through the center in more than 20 years. A bunch of street kids lived at every crowded intersection. The elders involved the young, put them on drugs, ” – the Pastor continues.

“I will never forget our last meeting with one guy. I tried to persuade him to return to our center – then he ran away and injected drug again. He was 13 years old. I found him in the basement and tried to persuade him for a very long time. He promised that he would come tomorrow, but that was the last time I saw him alive. After this story at his funeral, I reproached myself for not grabbing him and bringing him to us by force. Then I promised myself that I would not negotiate with street kids any more,” – Gennadiy said.

He no longer asked the guys if they wanted to go to the rehabilitation center. “We simply started taking them from streets, often they shouted“ Help, they will sell me for organs,” and we held them tightly and wouldn’t let go.  It was not difficult for me as I used to be a wrestling champion of Donbass, so physically it was easy for me to deal with them. They were simply packed into our cars – we spent hundreds of nights on streets, ” the benefactor says.

They took them out of heating mains and basements, sewer manholes and attics, and the kids were all arranged for life. Someone returned to the boarding school, many – to their families, others – stayed at “Pilgrim”. In addition to the  night raids, Gennadiy Mokhnenko also initiates an action against drug dealers and drug trafficking called “Sick of it”. The action began in Mariupol and ended  up at the walls of Ukrainian officials in Kiev.

The fight for life and against drugs continues to this day. The kids of “Pilgrim” actively resist those who are interested in the “addiction” of others. Just the other day, the pastor says, the pilgrims helped law enforcement officers to uncover another drug dealer.

In 2014, Mokhnenko rescued children and women out of their city in which the “DPR” had settled. Gennaiy and his sons also went to dig trenches for Ukrainian defenders. He recalls that back then people looked at them as at crazy ones.

“At the most critical moment, when no one believed that the city could resist, when everyone was simply leaving our city, I went with my eldest sons to the front line. From the entire city with the population of half a million, 70 people came to dig the trenches. 40 of them were my sons and friends. I remember that on the first day I gave many interviews and repeated to everyone: “I am of Russian origin. My mother is from St. Petersburg, and my father is from Kursk. I am a priest, father of 32 children, I dig trenches to defend the city of Mariupol from Russian tanks in XXI century.  Oh, someone, wake me up – is it real? ” In the evening it was broadcast on all TV channels and the next day many more people came to help, ”Mokhnenko stated, adding that among his sons there are some Ukrainian defenders.

A separate struggle is being waged by the “pilgrims” on the volunteer front: they still help both the military and residents of the front-line territories.

At the same time, the pastor continues to develop the “Republic Pilgrim” or the state of former street children.

They have their own government, ministers, their president of republic and even their own currency – “Piligrivna”. By the way, the note of 500 pilgrivnas has pastor Gennadiy depicted on it.