Pastor – pilgrim have got adopted son in Africa 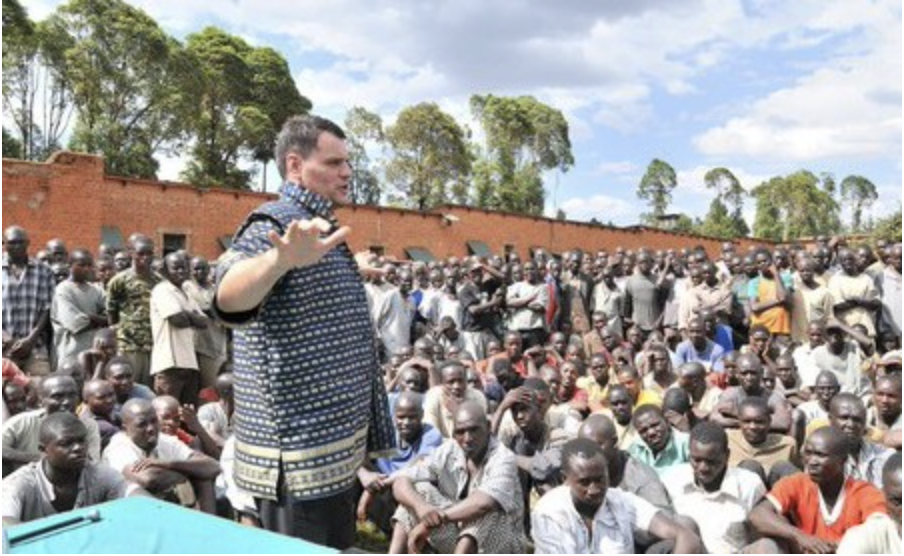 In the middle of January the missionary team of 4 people ahead with pastor Gennadiy Mokhnenko visited Kenya with the purpose to serve kids who live in total poverty. The trip was full of experiences and the missionaries got back home with tons of impressions.

Long before the trip in the charity fund “Pilgrim” the workers and the children “Republic Pilgrim” organized so called “African project” the purpose of which is to raise funds to support partner-orphanages “Gil Gal” and “Oasis of hope” in Kenya. That’s why the team got to go there with some gifts. They could bring along lots of presents such as toys, books, stationary, clothes.

For the majority of the members of the team it was the first trip to Africa. Telling about their impressions the missionaries could hardly hide their emotions, their pain and experience while remembering what they have experienced there. The first several days according to Maria and Diana they could barely restrain tears:

“I was actually weeping while taking pictures”. – Maria shared.

Horrible poverty, swollen of starvation children and old people, very young teenagers with bottles of clue they snuffed, drunken kids, clay floors and no tables in the cafeteria of the orphanage.

Maria Skolobanova: “What was really stunning is eye witnessing actual death in the very slum in Kipsongo mentioned by pastor Gennadiy a year ago. A mother and a child were dying there and everybody was forbidden to touch them. And there also was a corpse of a man that was lying there for 3 days and the locals of that “hell on Earth” just had no money to transport him out of that place…It can hardly be forgotten, hardly can be understood….”

The Mariupol team could pay for his funeral.

But they were not allowed to give out food on streets. Even to take something from their pockets was kind of dangerous. On seeing some food the children start rushing at you and at such moment there’s a risk to be killed in the crowd. Only Pastor Gennadiy was brave enough to treat kids with some sweets. But it took him awhile to make them stand in a queue.

Even to sleep in the hotel was kind of scary. At one of the nights they heard terrible screams – on waking up next morning they found out that at the distance of 200 meters from their place of stay a man was robbed and cut into pieces.

But all the fear didn’t make the team stop for a minute though.

The missionaries could visit several Christian orphanages where they managed to render some help: bought beds, helped to renovate some classes, gave several bicycles, on behalf of the fund “ Pilgrim” they could give a good TV set and DVD.

At one of the night the team didn’t go to bed at all. Alongside with the missionary team of the Saddleback church they drove around the city to cover homeless with the warm blankets. Local poor people and children sleep outside right on the ground and the luckiest ones can cover themselves with sucks used for keeping grain in.

Ukrainian guests got to visit Kenyan prisons where children live with their imprisoned mothers. The team from Mariupol brought there some gifts and for the majority of those kids those were the first toys they have ever seen. The most pleasant thing according to Pastor Gennadiy was the fact that those toys were not collected by rich people and business but the very same kids, former street kids who themselves need help. It made African guys delightful.

The missionaries could also invest some money to build 4 small houses for people living in horrible areas of Kenya – in slums.

Diana: “To go to Africa was my lifetime dream. When I got to Kenya I experienced quite different kind of feelings – it is impossible to put it in words, even the pictures can hardly show it in all the fullness…”

Vadim: “I was absolutely startled by the poverty I saw there… people eat right on the floor, both children and old people are so helpless. It was heartbreaking, hard to see…”

Mary: “Africa is a very bright sunny country! I see the red soil in my dreams. But amazing nature is in some horrible way twisted with poverty, and swollen of famine kids. At first we kept weeping… When we were giving out the gifts the children were so glad! We were also glad to bring a bit of happiness into their lives…”

It’s hard to mention everything the team got to do in Kenya.

But the most impressive event of the trip was the boy that pastor Gennadiy had met last year at the streets of a Kenyan town. The boy like many other kids in Kenya was living on the street, dressed in shabby, dirty clothes with a can of glue in his hand and with hungry eyes. Pastor had taken only one photo of the boy. During this trip pastor Gennadiy decided to find this boy, he’d walk around the city with his picture without even knowing his name and asking other African homeless children about him. In a couple of days they could find him. Dirty, with is belly swollen of starvation he was taken from the street to the orphanage. He was shocked at first and didn’t talk. He grasped the hand of Gennadiy and could come to.

The kid was given some food. It was his time to sit at the table with so much food. He swallowed food without chewing him looking around in snare and fell asleep at once after getting full. And after that Mariupol team could wash him and put him clean to the biggest bed he had ever seen.

Next morning pastor Gennadiy couldn’t understand for a while why the bed and clothes of Hillary (the name of the boy) was so dirty regardless of the fact they thoroughly washed the boy before. It turned out that the boy squeezed a candy in his hand after having a meal and went to bed and it got melted at night…

In spite of the fact the boy doesn’t speak English but only Swahili they managed to understand each other pretty well. The boy has become a part of the team and visited all the orphanages and places where Ukrainian and American missionaries, All the rest of the days the boy was singing Akuna matata song which is known to Ukrainians pretty well from the famous cartoon.

Ultimately the boy was in such a delight: he was enrolled in the Christian orphanage and one year of his education in Christian school was paid for. At the day of departure of the Ukrainian team back home the boy had hysterics and didn’t want to let them go because they have become a sort of real family for him… Pastor Gennadiy is convinced he can say now he’s got one more son now. Unfortunately he can’t take Hillary to Ukraine but the promised to make his best to make his life to succeed.