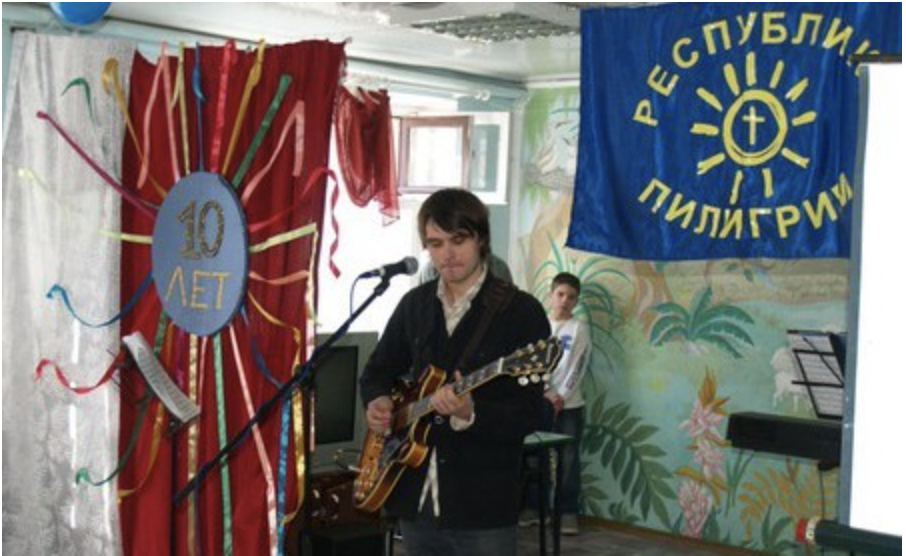 The state of former street kids "Republic Pilgrim" celebrated its first anniversary - 10 years since it's been founded! The mayor of the city of Mariupol and many other authorities like state service departments' chairmen, teachers, graduates from Pilgrim and many other friends of the center were invited to the celebration.

The kids started preparation long before: all the wall in party hall, corridors and foyers were decorated with the photos depicting life of the center within 10 years of its existence starting with night raids in the basements of the city block of flats and just streets where the drugged kids were picked up and finishing with the portraits of the champions – those kids who were awarded for different achievements in sports and cultural events of the city. Big part of the photos is the feats of young mountaineers.

In the party hall the golden Tree of memory was set up with photos of the kids who passed their rehab course in the children’s rehab center. Some of theose kids have already left this earth because of drugs and AIDS and street life but they are alive in the hearts of those who knew and loved them.

The event was opened by the speech of the founder of the Charity Fund “Pilgrim” Gennadiy Mokhnenko. He said many good words towards the city government who supported the project and help this work carry on. The words of gratitude were also directed towards the social services of the city who contributed to the work as well as to all people who taught the kids or rendered any kind of help within all these years.

Gennadiy Mokhnenko: ” I want to congratulate our city on the successful experiment which we altogether had started 10 years ago.We had built something that is now called the state of former street children “Republic Pilgrim” And we managed to essentially change the situation with homeless children in our city.”

Pastor stated that you can hardly find a homeless kid on the streets of Mariupol today. Many of those kids that were found on streets were raised in the center and have a better life now, achieved to get an education and got a job.Some of them got Higher education, some became champions in different kinds of sports, some of them conquered the highest mountain tops of the world – Ararat, Elbrus, Reiner volcano.

Pastor Gennadiy  also made a presentation of his book ” Non pedagogical poem” about life of “Republic Pilgrim” and he gave it with his autograph to the city mayor of Mariupol.

In his speech the mayor in his turn stated importance and actual character of the work with street kids and delinquent teenagers in the city, he thanked the management of the center for the work, promised support and cooperation.

Mayor of Mariupol Yuriy Hotlubei:  ” The 10th anniversary of Pilgrim is significant event for the city. The children of the center are our children! The future of Mariupol is up to them to some extent”.

Yuriy Hotlubei also shared his recollections on the visit of the prime minister ( inthose times) and now President of Ukraine Victor Yanukovich who had come to Republic Pilgrim quite a few years ago and was moved by what he had seen and highly valued the expertise of the initiators of the center for street kids and kids with different addictions.

Mayor of Mariupol: ” Tourist clubs and sports organization can be jealous seeing what pastor Gennadiy is doing. At times I even don’t follow the news where the kids were taken, to Kenya, to the US, to conquer Elbrus or Ararat. Traveling around the world you bring fame to Mariupol! WE should widen our collaboration, I think you should participate in city events more often.

The kids were given lots of present this day – a huge cake from the mayor, candies from locan candy factory, TV and video recorder from the actor of the local theatre of Drama, some gifts from the local newspaper and others.

The videoclip ” My God, You gave Your son” of the first president of Republic Pilgrim Andrii Dudin was represented to the audience  who is now a student of musical conservatory in Donetsk.

As a continuation of the program the little kids of the center recited funny poems and jazz band from he foster family Eagle’s nest were playing several instrumental compositions.

Among those who said warm words towards the center were the graduates of Republic Pilgrim who are convinced that having not an opportunity to  be rehabilitated they would end up hitting the bottom.

All the guest got “Non pedagogical poem” and a magnet with symbol of Republic Pilgrim. At the tea time where all the guest were invited they shared their warmest memories how the work had started and the funniest moments of it.

Tatyana Karpuhina , the principle of the center “Republic Pilgrim”:  ” We are extremely happy that all the preparations were not in vain and celebration had such a  success. We could witness the real victory in destinies of the kids who were happy enough to get to the center one day. It is so inspiring and sure enough it encourages us to move on with even more enthusiasm!”