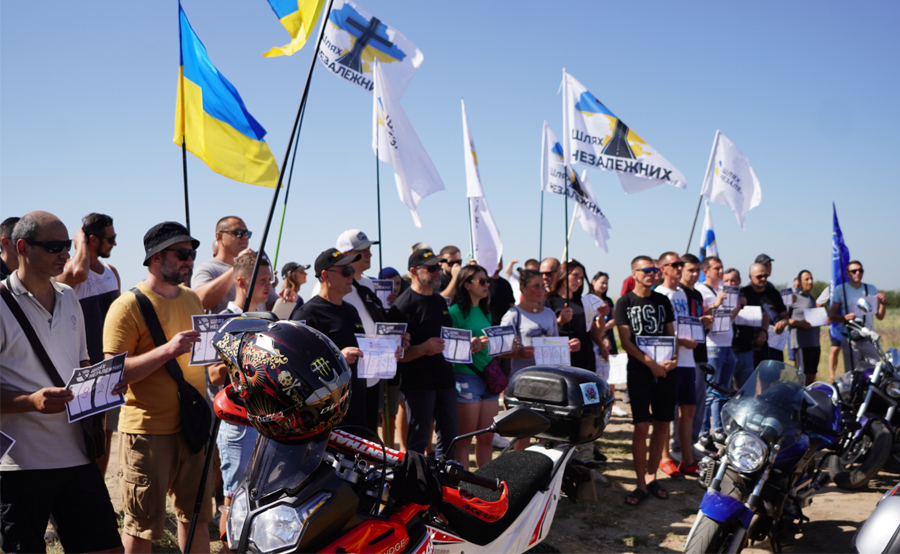 Today, July 15, the all-Ukrainian action «Shlyakh Nezalezhnykh»( «The Way of Independent» started in Mariupol.  Christians from all over the country came together to make a rally to the President’s Office in Kiev.  The protesters will demand tougher legislation against drug dealers. The action started at the Prayer Cliff.  More than 100 people with national flags and banners with the rally logo started in their cars.

The participants of the action were supported by the Mariupol bikers from the «Sparta» club.

“This is a patriotic and anti-drug action. Its participants are mostly former alcohol and drug addicts, people from an anti-social and criminal environment, who have left all this in the past. Many now have their own families and businesses,” said the organizer of the rally pastor Gennady Mokhnenko  …  He added that hundreds of drug addicts die in the country per day, but for some reason it is customary to keep quiet about this.

The pastor personally  has buried two former Pilgrim graduates quite recently.  The first one –  in December 31, New Year’s Eve, the other – two weeks later.  Young guys died from the use of illegal substances.  In April 2021, there was a tragic incident with a 16-year-old girl who died of an overdose.

«There is an undeclared, invisible war against a terrible evil – drug addiction. A real massacre. And today we are setting off to eradicate evil,» said pastor Gennady Mokhnenko.

From Mariupol a convoy of cars goes to Melitopol, then to Genichesk.  Participants of the rally «Shlyakh Nezalezhnykh» will travel all over the country,  they are going to visit Western Ukraine and to stop in front of the Verkhovna Rada, where they will announce a number of demands to the deputies and the President.

«We demand from the government to toughen the fight against drug dealers. Not with poor drug addicts, but with those who sell drugs and protect them. We want to show the country the colossal benefits and fruits of the work of Christian rehabilitation centers. These are tens and hundreds of lives saved from  addictions. These are incredible testimonies, – the pastor shared.

Gennady Mokhnenko noted that, unfortunately, until now the power structures in the country periodically attack rehabilitation centers and declare that they are freeing people from slavery, although in reality they are being saved there from the slavery of destructive addictions.  He recalled such a case in Mariupol, which ended positively.  The regional police got involved in the situation, quickly sorted it out and even apologized to the believers.

Also, Gennady Mokhnenko said that Christians would lobby for a bill that would force the placement of an addicted person in a rehabilitation center for a short time, relying on testimony about the insanity of a person from his family members, relatives, neighbors, doctors and a police officer.  «The potential of this law is tens of thousands of lives saved. If we were allowed to do this, we could help many people get back to normal life. I had a story with a famous person (I will not give her name) from our city. She asked me to help her husband and son. They were dying of  drunkenness and drug use. I could only come and talk with absolutely deranged people. If I took them for rehabilitation, I would be accused of kidnapping, «says the pastor.

After the announcement of a short sermon, Gennady Mokhnenko asked the former drug addicts to distribute a blank sheet of paper.  On the left, with a red felt-tip pen, people wrote the years of their addiction, and on the right, in green, the years of sobriety.

The numbers were amazing.  Someone has been addicted to the drug for decades and they no longer poison themselves.  Someone has just recently taken the path of clean and sober body and consciousness.

The believers thanked God for giving them the strength and wisdom to get out of the vicious circle, and hit the road.

The next stage of the action was a small meeting in the center of Mariupol.  Former drug addicts and church pastors read a prayer near the Theatre of Drama.

Gennady Mokhnenko thanked the city council for their cooperation and told several life-affirming stories about drug addicts.  One man came to the rehabilitation center on his last legs, poisoned with narcotic drugs.  He managed to recover, now lives in Kiev and became the father of 9 adopted children.

Another man, having coped with the deadly thrust, became interested in powerlifting and is now winning the competition, surprising everyone with his strength.

The current youth pastor of «Pilgrim» Sergei Kozyrkov is a drug addict in the past.  He and his wife almost committed a double suicide, because they saw no reason to live on.  Now he was able to realize himself as a family man and an active member of the community.

At the end of the rally, Gennady Mokhnenko announced the tragic but symbolic news.  Yesterday a drug addict died on Mendeleev Street in Mariupol.  The 37-year-old man got an injection and passed out.  He was taken to intensive care.  When he woke up, he ran out of the ward, ran several blocks, fell and died.

Those who had come together prayed for his soul and the souls of all who died at a young age, without being set free from the shackles of psychoactive substances.

Having chanted the slogans: «The Way of Independent around Ukraine» and «Glory to Jesus Christ», the participants of the rally set off.