The adoptive family – The Kovalenko – “children need family more than anything and no difficulties can compare with their eyes shining with joy and happiness!” 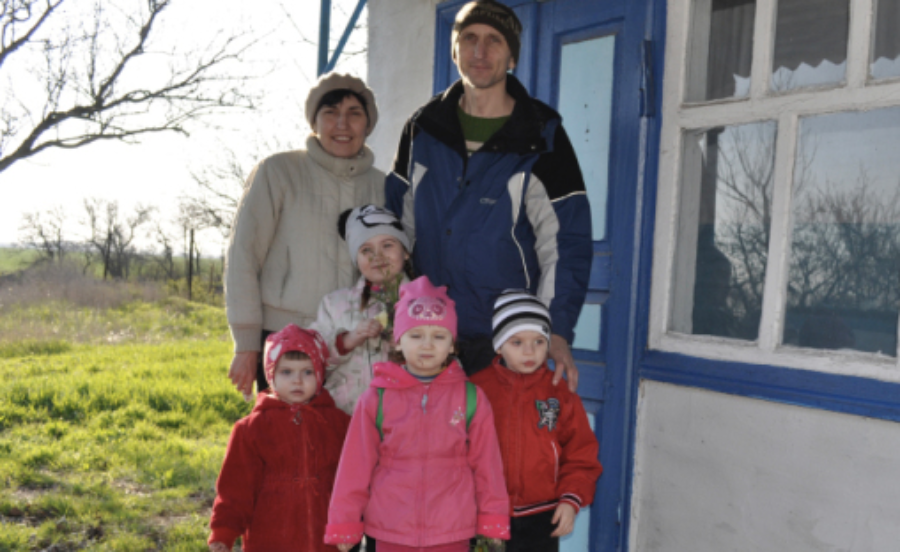 In 2008 Andrei and Larisa Kovalenko made a decision to adopt a child since they didn’t have their own kids. Presently, in 5 years after that, they are the large family where the parents raise 4 kids. They are not going to stop on this. They are convinced in heart that their family can be even larger.

When they first saw Eve in the hospital, Andrei and Larisa had no doubts – the question of adoption has been solved. Eve was 8 months old and within her short life by that time she saw only people wearing hospital uniform around her – and she suddenly obtained Mommy and Daddy. Every day Andrei and Larisa would come to see her and take her for a walk. As soon as all papers have been done Eve finally found herself in their place.

Larisa Kovalenko: « When we made a decision to adopt the child we got all the papers prepared for that and brought them to a special social service. In a month we got a phone call from there and they said there is a girl in the hospital that needs to have a family. We were so glad that there was only one girl because we could hardly imagine how to choose between many kids. I cannot imagine the whole procedure – somebody picks a child among many. When the nurse brought out to show us Eve we realized at once that she is our daughter”.

Andrei Kovalenko: « When our friends in a definite time after adoption started asking us if we have already got used to her, we didn’t know what to answer since we had this feeling that we have had her always!”

When Eve grew up a bit, Larisa and Andrei started thinking about adopting some more kids. They could see on Eve’s example how important it is for a child to have a family. In a week after they let the local social services know about their decision they got another phone call from there and were offered to adopt three more kids who were from the same family, relates who were already being prepared to an orphanage. Their parents abandoned them – 6-year-old Nastya, 4 – year-old Matthew and 2-year-old Nina – they were actually left in the locked home on their own. Neighbors called social services and they rescued the kids but the urgent question appeared – where these kids are supposed to go now? Thus Larisa and Andrei all of a sudden brought home 3 more kids.

In a time their mother reminded about herself. Larisa wanted to talk to her. While they were talking on the phone this mother made a promise to get well in life but after 1 year since this promise was made no phone call or any sign of interest in her kids was shown by her.Andrei Kovalenko: « All of them started calling us Mom and Dad from the very first day, even Nastya and Matthew who actually still remember their biological parents, they have become to us so close and so ours!”

Andrei Kovalenko: « All of them started calling us Mom and Dad from the very first day, even Nastya and Matthew who actually still remember their biological parents, they have become to us so close and so ours!”

After the Kovalenko’s family grew twice in size, the entire life of Larisa and Andrei changed a lot. Larisa doesn’t hide that it was very hard especially at the very beginning however by this time it has become much better and now they just know for sure that the most important thing they can give to these children is to be their family – they need it so much.

Larisa Kovalenko: « One day when I had only Eve I was praying for her and so this horrific vision – I was entering that hospital from where we took her and she was there in her small manger with metallic jails around. I could see eve grow and alongside with her those jails were growing. Seeing this jail horrified Me. I thought that my baby could be now somewhere in an orphanage behind jailed windows. It is painful even to imagine that. I cried a lot that night and I realized that in spite of all hardships we are so happy that she is with us!”

It has been a year since three more kids are in the family. Eve got used to her new brother and sisters. They behave now like true brother and sisters- they learn to be friends, to share toys. Nastya goes to her second year in school this autumn, younger ones go to the kinder garden.

The family still lives in the city but soon they will move to the Chervone village near Mariupol, the house was purchased for them by the Charity Fund “Pilgrim”. Presently it has been fixed and remodeled; it needs proper renovation works to be appropriate for living in. Larisa and Andrei active raise their 4 kids and started thinking about the possibility to adopt some more kids to their family.

Larisa Kovalenko: « recently Eve and I have been to Donetsk hospital and while we were in the queue we saw some abandoned kids. The nurse told us they were orphans. I was looking at them and tear were rolling down my cheeks I realized how important it is for all those kids just to find mother and father. I overheard a woman telling about her son who dreams about kids but can’t have them and others just abandon their kids, so I sat closer to them and showed my Eve and told her that I adopted her, so I recommended her to persuade her son not to be scared of adoption and that the kids in orphanage wait and dream about being adopted. She promised me to speak to her son about it. As a mother I know very well that children need family more than anything. We should adopt kids, serve them surround them with love, care, attention and boundaries. No difficulties can compare with joy and happiness that shines through their eyes”.