The bike action “Russia and the world without orphans” has reached the finish line. 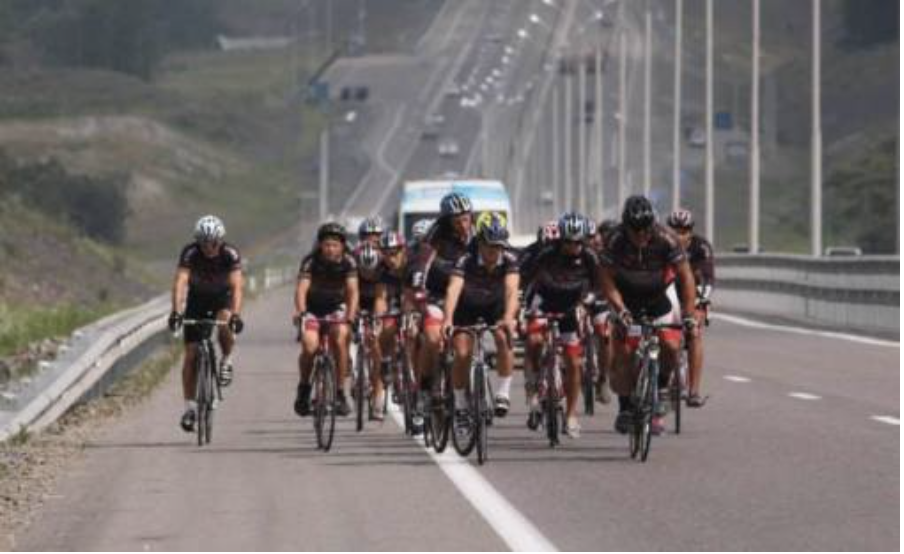 In July 21st the team of the bike action solemnly entered the city of Khabarovsk. For our heroes it was already a symbol of the start of the finish line. The last 500 miles are perceived as a done deal. However it is still a huge athletic feat and there were 30 public events to do with the action in cities and towns of the Primorsky Krai, Ussuriisk and Vladivostok.

In Khabarovsk all the events and meetings were held in accordance to the plan and the schedule arranged by the local organizational committee that consists of the representatives of social organizations, priests and city rulers. Significant role to attract the attention of local Mass media was rendered by the press center of the governor of the Primorsky Krai.

« Despite of storming winds and rains we entered Khabarovsk only 40 minutes later than it was planned (due to the rain cats and dogs right by us)! We thank all those people who were meeting us at the entrance of the city regardless of the bad weather. We were especially impressed by the parents with kids on bikes! It was a great surprise and it was important for the team!” – The leader of the bike trip and the initiator of the action Gennadiy Mokhnenko shared on his facebook page.

In Khabarovsk the partakers of the bike action were met by Ivan Iklyushin, the chairman of the organizational committee of Russian stage of the bike action “Russia without orphans” and the leader of the Alliance of initiatives “Russia without orphans”. “He arrived to Khabarovsk to escort us to the very finish line in Vladivostok”, – Mr. Mokhnenko added.

Beside that the participants of the bike action had a meeting with local youth of Khabarovsk. “In a large trade center (after the bikers entered the city) they organized for us a very good program in the hall of the local trade center. The guys from the local youth organizations made a great performance for the partakers of the action “Russia and the world without orphans” and after that the local businessmen (the owners of the restaurant with a cute name “Ukushu” (which means “I’ll bite”) made a real feast for the guys. It was fun and it was delicious” Thank you!” – the leader of the bike trip pointed out.

All the planned events were taking place under a great attention of the publicity: the solemn meeting of the bike action, the press-conference, the round table, the meeting with the believers of the city and with the local priests as well as the street action at the main walking square of the city.

The genuine precious thing in the city is its people! The organizational committee is a wonderful gathering of people from different social organizations, churches of the city, city government and ministry of education and science of Primorsky Krai – they all worked together for good! I thank the coordinator of the organizational committee Yuri Ilchenko and to dozens other people. The city got instead many new happy life stories!” – Ivan Iklyushin shared his impressions.

Only 500 miles left till the finish of this stage of the bike action. The 4th stage of the worldwide bike action of the former street kids and orphans “Russia and the world without orphans” had started in June 13th. The organizers of this large scale action are the Alliance of initiatives “Russia without orphans” and the Charity Fund “Pilgrim” supported by the city, the regional organizational committees that unite representatives of publicity, religious organizations, volunteers and local governments.

This is the final stage of the Russian part of the bike action. Till July 30th the partakers of the bike action are to ride the route from Baikalsk (Irkutsk area) to the intermediate finish in Vladivostok. Altogether it is over 2500 miles.