The bike tour from the Eastern Ukraine to Helsinki – “The situation there is tough, the fighting goes on daily” 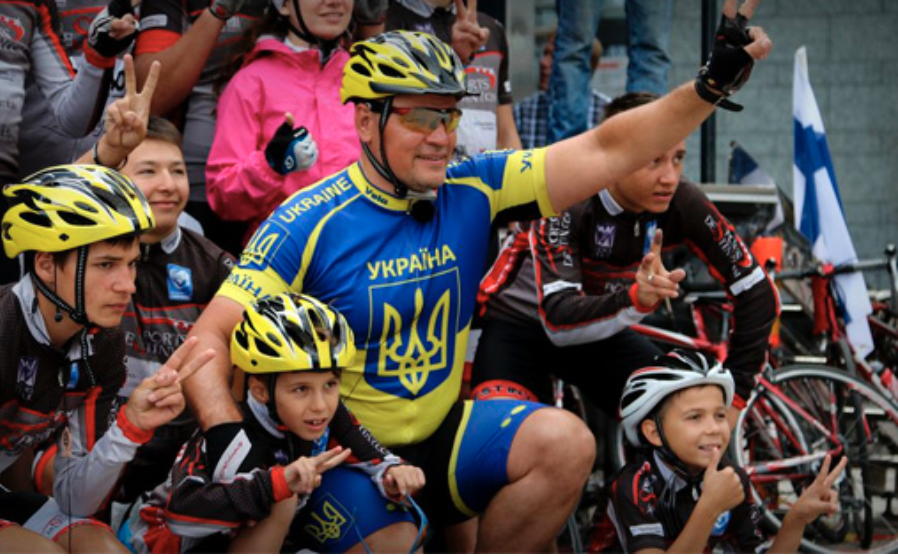 The group of the former street kids has arrived on their bikes to the Narinkkatori square ahead with the Pastor Gennadiy Mokhnenko. The bike tour along the northern Europe on the idea of the initiators must attract attention to the situation in the East of Ukraine and to the problems of orphaned kids.

The pastor and Ukrainian public figure supports the young participants of the bike tour in the center of Helsinki. “World without orphans” – he shouts out loud sitting on his bike. They have 4 weeks behind them traveling from Ukraine, Poland, The Baltic States to Finland. In the bike tour about 20 young people take part, the youngest of them are school students, the eldest are already grownups.

All of them are former street kids, many of them had lived in sewers and heating shafts for a few years. In 1990-s Mr. Mokhnenko founded the orphanage to rescue street children. – At those times I saw so many deaths among the teenagers caused by drugs. They were abandoned by everyone. Fortunately, the situation only improved. Since then Gennadiy had adopted 32 kids. His organization “Republic Pilgrim” managed to rescue from streets 3000 street kids.

The orphanage of this organization is in Mariupol and from there it is only 15 km to the frontline. The strategically important Mariupol is under protection of the Ukrainian army and on the other side of the front there are separatists supported by Russia. – The situation is tough, the fighting goes on daily, the separatists use grenade launchers.

The bloodiest months within the year The war in the Eastern Ukraine has been going on for over 2 years now. After more or less quiet night the fighting broke out with the new vigor. July has become the bloodiest month within the year. The main battles go on around Donetsk but in Mariupol the cannonade doesn’t stop. Gennadiy Mokhnenko comes to the frontline almost every day. According to him, the separatists are very active. The Ukrainian troops fire back but they don’t shoot first. The Ukrainian soldiers get killed daily. Gennadiy’s son is at the front One of the adopted sons of Mokhnenko presently serves in the Ukrainian army. He is at the front not far from Mariupol.

– The separatist sniper has recently shot the brother-soldier of my son. My son was just a meter and a half from him when the 19-year-old soldier was killed. – This was is insane. Sometimes I hope to wake up and see that it was just a nightmare. Just three years ago Mokhnenko couldn’t imagine that the war is possible in Donbass. And it’s been a second year now since he started being a chaplain- volunteer at the front.

– I came back from the front just a few hours before the start of the bike tour. And I had some kind of relief since I will have 8 weeks without the war. “I love Russia but I hate the putinism” Gennadiy Mokhnenko is pleased that the kids that lost their parents to the war could find the new families. He thinks it is a result of the efforts of people united by the war. By his estimation, the number of people killed at this war is around 20000 people, the official data though says it’s about 10000 of them.

– I love Russia but I hate the putinism. I believe that the Russian imperialism will soon collapse, and this war will end. Gennadiy is totally convinced that it’s the Russian side that directs the military activities. According to him the Russian soldiers are constantly there at the front, especially officers. The economical situation is very difficult The war activities that have been going on for over 2 years don’t go beyond the frontline, the cities and towns are under fire not too often now, the main issues of average people at this war are focused around the source of income. The basic foods and goods have become many times more expensive due to the inflation. The level of unemployment is very high since many industrial enterprises around the war zone ceased working. The bike tour is to be continued But during these 8 weeks the participants focus their attention on the other stuff. They want to attract the attention of the people from the Northern Europe to the situation in the east of Ukraine and to the problems of orphans.

From Helsinki their route goes through the Finnish cities such as Hameenlinna, Tampere, Huittinen to Turku. From the port city Turku the bike tour will head to Sweden, Norway, Denmark and Germany. The bike tour that started in July will be completed in the early September. Gennadiy Mokhnenko with the adopted kids has had a few stages of the bike action before. The longest distance they had overcome was from Ukraine to Vladivostok across the entire Russia.

– We want to ride on our bikes around the world. If Putin doesn’t attack Mariupol we will make another stage of the bike action next summer – this time across the USA.