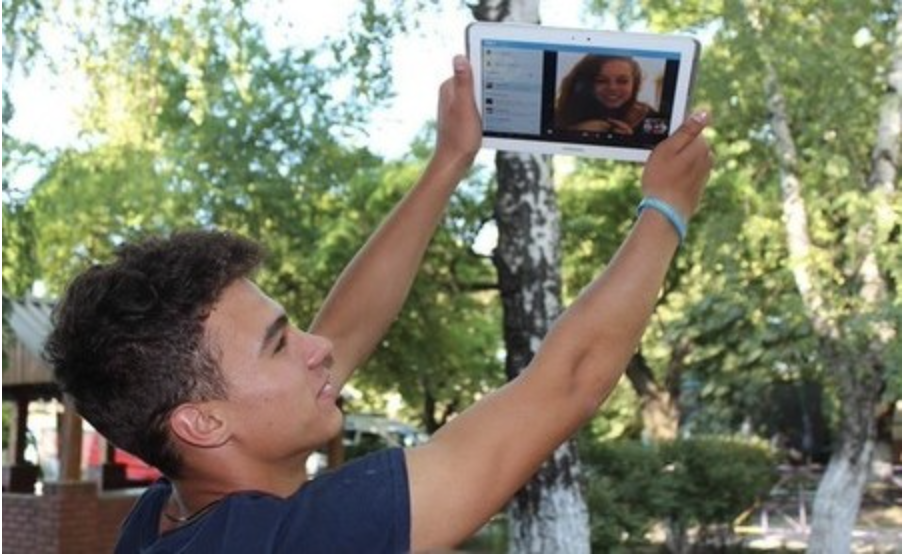 18-year old Sergey and 16-year –old marina had no idea about what happened to each other for 10 years.

– When I saw Marina on the screen of my tablet for the first couple seconds I was speechless and I could hardly breathe of excitement. But I surely recognized her at once – she is my blood sister after all. Of course she grew up and looks like a real European girl now. It is hard to believe that such a big part of our lives we didn’t know anything about each other. – Sergey Kucheruk shares, a student of the 3rd year in the Mariupol commercial college.

The fellow is holding his tablet with his hand put up to show her the place where he was raised – the Center of children’s rehabilitation “Republic Pilgrim”. About 50 kids from this center are round him sharing his joy and waving to Marina – his Skype conversationalist from as far as Milan, Italy.

This is a unique case – the boy found his sister who was adopted by Italians 10 years ago. They both were born in Donetsk in a dysfunctional unsafe family. Sergey never saw his father and has rare childhood memories of his mother. He rememebers how messy it was in their house and frequent drunken parties there. He remembers how he and his sister wpuld run away from home and would be found and brought back pretty soon.

When Sergey turned 7 and his sister turned 5 their mother was deprived of parental rights and both kids were brought to the state orphanage. After marina was adopted by an Italian family and taken to Milan Sergey as thought fell of the rails and started running away from the orphanage frequently, started living on streets, “enjoying” all its freedom. And then he got to know about the center “Pilgrim” and his life started changing tot the better.

– If not for the Dad (this is how Sergey calls his adoptive father Gennadiy Mokhnenko – Author’s Notes) I would probably have died on street by this time. I used to snuff the glue, to steal, to beg but now it is all in the past, – Sergey recalls.

He found himself in sports, he even became a champion of Ukraine in boxing in his junior high years. He ascended the Elbrus Mount and the Goverla Mount too. And then he started looking for his sister and their younger 8-year-old brother Daniel. He found him and took him to “Pilgrim”. But to find the traces of his sister was not so easy since the law defends the secret of adoption this is why even siblings can’t get any information. They can’t do it officially but Sergey managed to get to know the last name and the phone number of the adoptive family of Marina in Italy.

The Italians had many doubts and tried to check the personality of Sergey and why he wants to see her. – Gennadiy Mokhnenko told, the President of the Charity Fund “Pilgrim”. I can relate to their parental defensive feelings, they were worrying about their daughter this is why they hesitated for awhile to tell her about my telephone call.

And recently in one of social networks Sergey received a notification of someone wanting to add him as a friend. He clicked the link and recognized his sister immediately. And in a minute they were already talking on Skype and couldn’t restrain tears.

I was so thrilled and full of emotions and I forgot even to ask her some questions I really want to know. – shares Sergey. We were recalling our childhood, how we ran away from home. She didn’t know we had a younger brother Daniel and she was so happy to get to know about him. It turned out the parents never told her about me, but she found me herself. Her birthday is at hand so I have sent her a birthday gift.

Sergey says that he has no intentions to go abroad. He wants to graduate and then to settle down to become a guardian of his younger brother, legally he will be able to do that when he turns 21. Fr now he dreams to see Marina and the negotiations have started with her parents about that.

“This story is unique”

– Not so often former street kids grow into normal members of society, Vyacheslav Asaulyak, the school psychologist notifies. Many times in orphanages what they do they give meals to children, and some leisure time is organized for them, this is pretty much it. In the center “Pilgrim” however all the children are given chance to feel their importance. They do bike trips, conquer mountains, do sports – it helps a child to realize that good things in life depend on their own efforts and they can develop their personality.

– It’s first time I heard how the kids who were once separated and then they found each other. This story is unique; normally a brother and a sister would be adopted together. And if they wouldn’t the new families do everything for the past not to be remembered any more, Nikolay Kotlyarov, the director of Slavyansk boarding school admits.