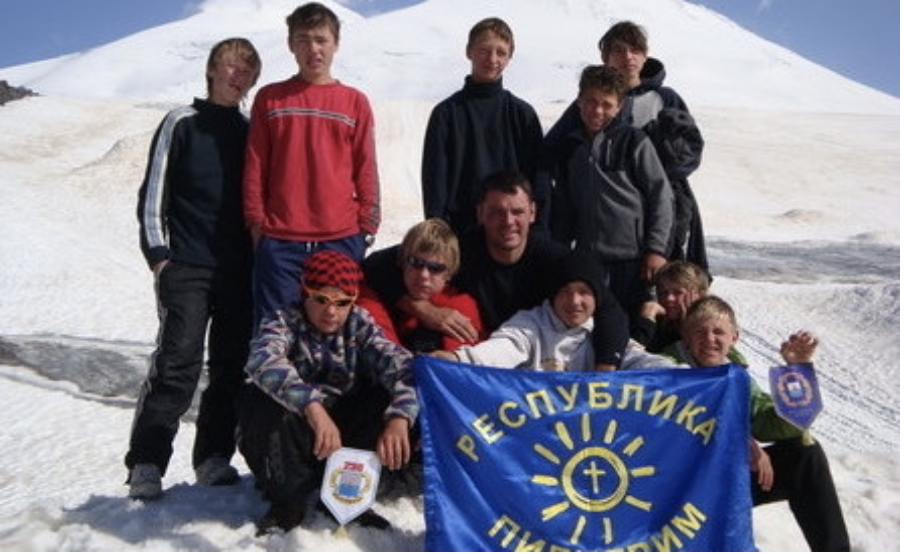 Pastor Gennadiy Mokhnenko — about his own experience of adoption The members of the church have adopted about 100 kids by now. The “loudest” adoption was of 7 kids with awful diagnoses and the Isayevs were brave enough to do it. By the way, it was Eugenii and Svetlana Isayev who had adopted first kid with HIV positive status in Ukraine. They surely did it with support of Pastor Gennadiy Mokhnenko.

Pastor Gennadiy Mokhnenko with his teens conquered Elbrus and Ararat mount. Now, in summer months, they will do their around the world bike trip. The purpose is to go around the world within 6-7 years and to call on people for them to adopt orphans. They have already made their bike trips through Ukraine and part of Russia, got to Ufa, Samara, Chelyabinsk, Yekaterinburg… And then they will go to Tyumen, Omsk, Novosibirsk, Irkutsk, Vladivostok… And then- the US, Europe…

I couldn’t help meeting the pastor while he was at the interconfessional summit “ Defend an orphan – change the future” that took place in Kiev and to interview him.

– Like many of my friends who adopted kids I never thought of adoption before. But there are so many orphans in Mariupol. We had bought a half- ruined building planning to have our church there and a quarter from it there was this cross road where there were dozens of street kids. We tried to show them our Christian mercy and started going there to feed them. It was a simple food but warm and fresh. Then several kids asked us if they can live in this building, it was not much better than basements then because instead of windows there was a polyethylene and blankets instead of doors…

How many kids had come then?

– Four. And then they started bringing there their friends. In a short time there were 30 of them And we started witnessing many miracles of God.

– Once I heard a voice in the middle of the night. (I am not a mystic at all, quite a rationalist. I like playing chess. I am very cautious to people who hear voices). But then I heard very clearly: “These are My children. I will give all that is needed”.

I remember I woke up my wife immediately. “Why are you so nervous?- she asked me calming me down. – If God said it, He will do it”.

In 3 days I was in the office of the director of Mariupol metallurgic plant, Vladymyr Boyko, this plant is one of the biggest enterprises in Ukraine. There was always a big line by his office. I really had no chance to get there. I never even tried because this director never hid that he was an atheist. He read my petition about 20 cement sacks and 3 cubic meters of wood and signed – “To do all we can do”. As a result in 4 months the kids had their renovated building. It wasn’t that nice and new too long since they had started crushing it rapidly. They broke some doors the very first day and even exploded the pan in the toilet. Someone threw in a firework. They decided to check the sound effect. That was the beginning of the work of the center of children’s rehabilitation “Republic Pilgrim”.

Do you remember how many kids “passed” through the Center? And by the way was it there where you met your adopted kids?

2700 children “passed” through the center. ( So many of them were drug addicts and HIV positive, unfortunately we buried quite a few of them).

We had been working in the orphanage mode for the first years but then we saw that when we take a kid from street and put him to a place like the one he had escaped from about 80 times before, and then you are not sure if you see him ever again, we decided to take a guardianship instead. So my wife and I started having first foster boys. We have 3 biological children but all 31 of our kids are our own, we don’t distinguish between them!

Pastor Gennadiy, do you adopt only boys?

No, girls too. My first adopted daughter is 25 now. She is married. Her son is 8. I fostered her since she was 12. She used to live in canalization sewers. And she used to work as a prostitute.

If you want to live an exciting life- go towards someone’s pain, someone’s trouble; go there where it is hard and bring good changes. If you see that someone’s life was changed and you will realize that you were kind of related to that change you will have an outburst of love and joy.

When we saw that there is no better alternative than family we kept adopting ourselves and started encouraging us to adopt. More and more of my friends made a decision to adopt. Some of them adopted one child, some, as thought getting the taste of it, adopted the second and the third kid. Thus, people from our church (about 650 people) adopted about 100 boys and girls.

– Which difficulties did you come across while adopting?

– Many difficulties (I pay a tribute to those people who pass through all the bureaucratic system and takes a kid). It is because there is no culture of adoption in Ukraine. When you adopt they ask you: “Why are you doing it? Can’t you have your own children?” I have got fed up with this question so much within these years so I had to make a declaration – I can have my own children!

We believe that nowadays we take part in injecting the culture of adoption in our society. Secondly, adoption can become to some extent some kind of a healing for the Church. One day I was standing by my 14-year-old adopted son, he was dying of AIDS – he used drugs since he was 10. He had to spew out his own lungs alongside with blood. He had like 40 minutes to live. I will be honest with you, I couldn’t pray and speak about the Kingdom of God, I just cried and asked “God where we had been when this boy was just 7 and found himself on street?” We, priests and believers need to experience pain! It is the very pain from the heart of God- Father! In such a way we won’t grow cold in motivation. Through the years I understand less and less when churches spend their energy on interdenominational arguments. Do you remember in scriptures when apostles were arguing who is more important among them. Jesus knew their thoughts and put a child in front of them and said: “Who accepts a child accepts Me and the One Who sent Me”. Obviously there are times for philosophical doctrines too but not today – today we need to work together!

I used to hear that some people would love to adopt but they are scared that the kid will have a bad impact on their own kids – genetics, difficult childhood…

Adopted children are the best pedagogical and psychological method for the biological kids. You will see that your kids will start learning to realize that the Equator doesn’t go through their won bedroom and they will learn to live with others and for others.

A famous physicist Bles Pascal used to say that the biggest privilege given to a man by the Most High is to be the cause of a good change in someone’s life.

The entire beautiful and colorful world means less that life of any of my adopted kids!

Pastor Gennadiy, do you try your best to raise kids in Christian moral?

It may sound weird from the mouth of a priest but I don’t emphasize on religion at all. My task: to love my adopted sons and daughters and to show them a good example in life. To be very honest, I don’t think it is the best idea to let very religious people adopt – they might think that the best method of upbringing is to read Bible from morning till night and to pray 5 times a day. Children must find themselves in good families with right values. It is evident that healthy Christian families are the best place for it.

Of course it makes me happy when I see my adopted kids after many years going to church, pray to God, raise their kids in Christian spirit.

They say that sick orphans who get to such families often recover. Do you know such stories? – Many of them. Healings first of all are based on deep spiritual processes.

Our medicine is conservative and reluctantly believes in miracles. But we are believers and we believe! By the way, miracles happen to those who believe in them! For instance, Sashenka who was adopted by the Isayevs had been given 2 – 2 and a half years to live. After so many years she feels great and grew a beauty. And she makes awesome pancakes! Faith makes miracles!

At the Christmas table last December I was asking them which dreams they have. One said – I dream about a bicycle, another said – rollers, the third said – MP3 player. But 15 year-old Sasha said: “ 4 months ago I had neither home, nor parents, nor brothers and sisters. I couldn’t even read. What I dream about? I have everything I could possibly dream of!” when I heard it I had to leave the room to come to senses, and as you can see I am not too sentimental.

You know, I live a weird pastor’s life. Not all people understand it. And many times I was told that pastors should live differently. Yes, many nights are spent in night raids in sewers and block basements of Mariupol to search for street kids there. Sometimes I would find myself in a radical incident. Of course I could live for myself. There is propaganda of such lifestyle nowadays. But I have my own secret of happiness. Christ was teaching it: blessed are those who weep – they will rejoice. So to say, if you want to live a happy life – go towards tears and trouble go where it is hard and bring good changes. If you see at least one changed destiny and you will know you related to its change somehow, you will have an overwhelming stream of love and joy on you.

People suffer from depression. But I will probably in due time die of the attack of happiness. I came up with this idea for my epitaph: “ Thank You, God, for the happy life You gave me to live on this earth for You and for people”.

The photos are given by Gennadiy Mokhennko