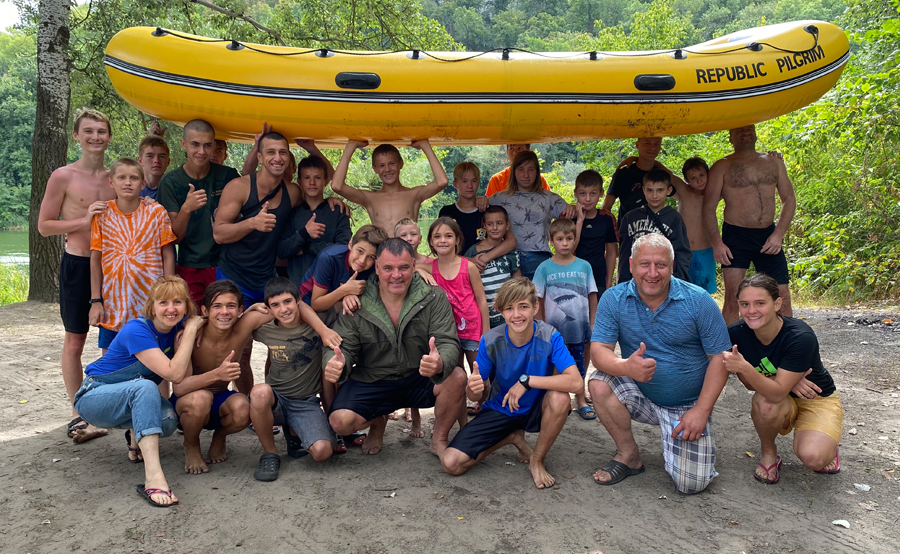 In a special story for the program "Evening with Nikolai Knyazhitsky" we tell about the pastor of the Protestant "Church of Good Changes", military chaplain and father of 38 children Gennadiy Mokhnenko.

Mr. Gennady was 24 when he left the successful book business and became a Protestant priest. He was driven to God by the desire to save his loved ones suffering from chronic alcoholism, when all attempts to help had been in vain. But this time everything worked out.

But Gennady did not come to some already existing church, and together with his friends created a new – Protestant “Church of Good Changes”. And he became its pastor.

“Later we joined the confession, the church movement. But we can say that I was a homeless Christian and a homeless pastor in the first years. Maybe his is the reason why my life is connected with street kids,” Gennadiy Mokhnenko notes.

Children, or rather their salvation, became the work of Gennady’s life. He is the father of 38 kids, three of them are his biological ones, others are adopted, but there is no division into his own and not his own in the family. The guys for whom he became a foster father lived on the street for years, using drugs and alcohol from an early age.

“At first in the “Republic Pilgrim” there were 90% of children with punctured veins, necks, some even injected in the groin. There were a lot of children with AIDS, and we buried many,” the man recalls with great sadness.

The rehabilitation center has everything for the comfort of children: its own rooms, although each has 5-6 residents, a dining room, an assembly and a sports hall, a recreation room with computers, a medical room, classrooms, because children study right in the rehabilitation center, a playground, a football field and even a trampoline.

And also trips across Ukraine and abroad are constantly organized for the residents of the center. Presently 35 kids live in the center.”

. For more than 15 years he has been fighting the drug business in the Donetsk region. He organized many actions, calling the authorities to take measures. The scale of his work is impressive, because, according to the calculations of local journalists, drug dealers lose about two million dollars a month due to Mokhnenko’s activity. Of course, the pastor is constantly threatened with reprisals, but Mokhnenko is sure that the Lord protects him.

In addition to helping children, Gennadiy founded a whole network of rehabilitation centers for adults as well. The last of them is a house for mothers with children who find themselves in difficult life circumstances, “Young Mother”.In addition to the war for human souls, which is the main thing for the pastor in his life, there is also the Russian-Ukrainian war. Gennadiy’s family lives 700 meters from the trenches, and the front line is just at hand. When the mine-throwers work, you can hear everything. Therefore, the pastor could not stand aside and became a military chaplain. The family believes in a peaceful future when Ukraine regains its own territory.