“You still sell drugs? So we go to You!” 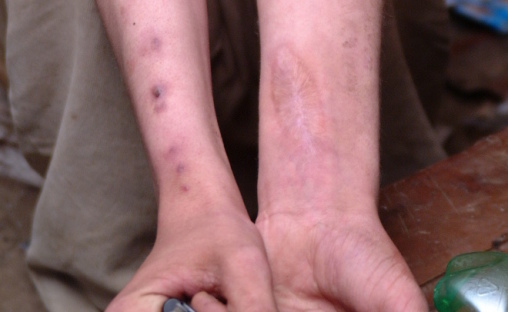 The Charity fund “Pilgrim” and the Church of Good Changes is the largest rehabilitation project in Ukraine and in the course of six years it carries out an active work on rehabilitation of drug dependent teenagers and adults the work in Mariupol and in the branches opened in 12 regions of Ukraine and Russia.

At present in all the branches of the fund more than 300 persons having problems with a drug pass rehabilitation . The set of the changed lives of adults, of children returned to their families and to normal life – all that is a fruit of this work. However, closely working with drug dependent people, we come to a sad conclusion, that no actions of taken all together rehab projects can stop avalanche growth of drug addiction in our society. Absolutely impudent and practically openly operating in our city drug-dealing system involves huge number of teenagers and youth. The sale of narcotic substances, to our great regret, is conducted under “care” of employees of the police and for decades it’s been carrying out in the same places. Repeatedly, demanding intervention, we gave the workers of the Ministry of Internal Affairs all the data about where and who is engaged in this “business”. However from the same doors, from the same market counters, the same people during the last ten years conduct barefaced sale of narcotic substances.

Working with drug dependent people, I personally buried tens of guys, and sometimes children buying their “dozes” from all the same persons, perfectly known to each Mariupol addict and, alas, to those employees of the Ministry of Internal Affairs who “are fed” from their hand. There is a plenty of cases of the cynical “gathering” of addicts by the police and at the same time friendly, patronizing relationships of the same “policemen” to «drug lords». Some of these plots simply shock by the impudence of people in epaulets.When the employees of police take out of the city the addicts “bringing up” them for not returned debts to the drug lords, the situation is not just comical, but it seems to me it is getting disgusting.

Only yesterday, I have once again come with some employees of the fund to one of the known places of trade in a dope, located in the city centre and again became the witness of the real stream of 15-year-olds who were standing in a queue (!!!) to a window at the door of the apartment which they call “feeding trough”. The mistress who has not noticed my presence, explained to clients, that «cops have told not to sell today till the evening » and has advised to come after six hours. In the centre of children’s rehabilitation «Republic Pilgrim» only at present there are some teenagers, who are only ten years old (!!!) – these children bought from the same door their first “dozes”. Among the employees and the people on rehab in our centers there are not few people who even in 1995 (!!!) bought drugs from the same door and they buried a big number of their friends by misfortune. Tens of mothers and fathers addressing for help in the fund “Pilgrim” can confirm that their children began the drug practice at the same doors. For this reason the conversations on inability of the police and imperfection of the legislation seem to me not just negligence, but frank concealment of the lawlessness reigning in this sphere.

Weekly in the city they bury young men who have finished the terrestrial way in the status of “addict”. At least, one similar funeral was yesterday, previous known to me – two days ago. 80 % of crimes in the city are carried out by the people who in such a way get money for their “doze”.

Weekly, as consequence, teenagers and young men having a drug dependence sit down on a dock.

Weekly numbers of those who have become drug addicts replenish with new adherents and every year their quantity, contrary to reports on success in struggle against drug-dealing, promptly grows.

Weekly the drug addiction moves from unsuccessful families to higher social classes, confidently expanding the social base. As plague, this trouble goes from house to house and already nobody can have confidence that tomorrow it will not knock at their door.

To continue to put up with the similar state of affairs is criminal as from the point of view of the Scriptures as simply from common sense position.

Because of the aforesaid the charity fund “Pilgrim” whose authorized activity is to work on prophylaxis and helping people to set free of narcotic dependence, declares the beginning of the action of the public protest «SICK OF IT».

The first step of the given project is the requirement to the management of power structures immediately to stop long-term open activity of the places of drug sale in the city. In case if in the current week in the places of drug traffic specified by us the sale will not be stopped, or, having been seized on couple of days, it will renew again, we will go forward to the further actions.

Since already at the stage of preparation for the beginning of this action, the open threats arrived to the employees of the fund “Pilgrim”, we are compelled to declare that any attempts of pressure upon the participants of the action in any form from any sort of structures will be also the reason of immediate transition of the action to the following step.

Behind this statement there are some hundreds of the former addicts who had recovered from the dependence, hundred parents and plenty of citizens of our city who are not indifferent to what occurs to our children, families and society as a whole.