African journal of the pastor – pilgrim Part 1. Do I need to quit? 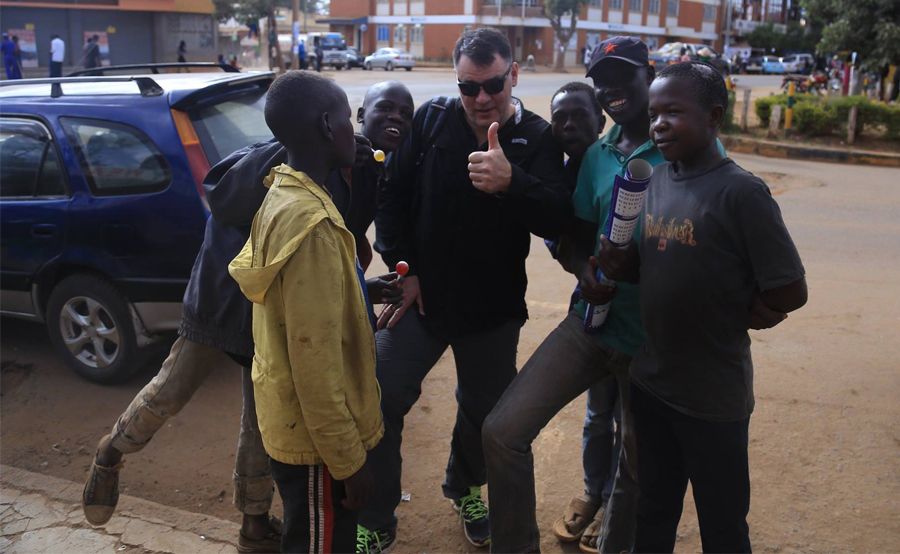 Only two nights on the road without sleeping plus the climate change from 5 to 104 degrees Fahrenheit. I have a headache. Why would I?

“I need to quit with such rhythm of life and such lifestyle” – it was the first thought. But not the last one. The second one: “It is what is really worth living for and burn for!” This thought came immediately after the first one right at the moment of my long awaited meeting with my adopted African son.

We have already arrived with my team to the east of Kenya after 2 day trip. When in the morning I barely alive from exhaustion collapsed into bed a surprise was waiting for me…My adopted son came, the one who was found by us on street a few years ago, his name is Hillary. This moment of the meeting with the former street kid and now a student of the best Christian school of the city is a very important event for me. The boy has forgotten long ago what it means to live on street, to beg and to snuff the glue. Studies, church, good Christian friends.

The boy counts months, days and finally hours till my coming back. This main day in the calendar for him and this life festival is Today!!!!

I didn’t manage to get a good nap. We went with some guys from the team to the city to do some shopping for his studies and everyday life. New clothes, student’s books, copy books and a special present from my boys to their brother on the end of the world – a cell phone!!! To cut a long story short a cool day for my black son!

Oleg who arrived with me was on the plane and out of the post soviet territory for the first time in his life. It is a special pleasure to watch it. His emotions are beyond measure, the shock of seeing a plane of such a size and of boutiques in Amsterdam (we had 3 hours layover there) – all of it impresses.

Oleg is a great guy otherwise I would find the way to drive him away my adopted daughter he dates with))) he learnt video and photo programs and helps out in Pilgrim with the information work. The last developing project “Different prospective” is his handiwork. He had been dreaming to be in missionary trip with me and this time has come.

Sorry but I am on the end of my strength. The red light flashes reporting overload but it doesn’t go out… Tomorrow morning we are going to the mountains. -Retreat in the fire service! (it was my favorite command in the army times))) Time to sleep…

We woke up early, grabbed some food and hit the road. We started to the Mount Elgon today. It is on the border with Uganda. There, on the very top our friends and partners in work live.

We lost our way ( it isn’t too hard here) and drove through such dirt roads that from the fifth time we managed to get to the top in slalom manner. It was scary and we grabbed some adrenaline….

All covered with end dust, chewing red clay in our teeth, we were late but still got there to the top to the church of our friends.

Recently there has been a war fight of two ethnic groups. The blood was shed and in this church a pastor was killed at the sight of his wife. He had 10 kids….

We had been here a few times and saw many miracles. It is so nice to come back and to cause some good changes again. We buy food for seniors and kids. It is draught here. No rains since August. The situation is very tough. The fact that we are here is a miracle for elderly people and children.

On our way we rose a donkey from the dead ( at least we thought so)!!!))) We were certain that under the heavy load he has  simply passed away  having collapsed on the soil. The team stopped and all of a sudden we discovered he was breathing. Altogether we put him on his legs, gave him water and he kept moving!!)))

After the service we made a show for kids and sure enough with gifts! On getting tired and overheated on the sun we started the long and tiring way back to our base.

In the mountains even though the hosts were hospitable they could treat us with bread only and even it was limited. We feel so hungry after that. This is why I am completing my report. Supper and retreat! A lot of work for tomorrow!