Around the world with the mission of adoption 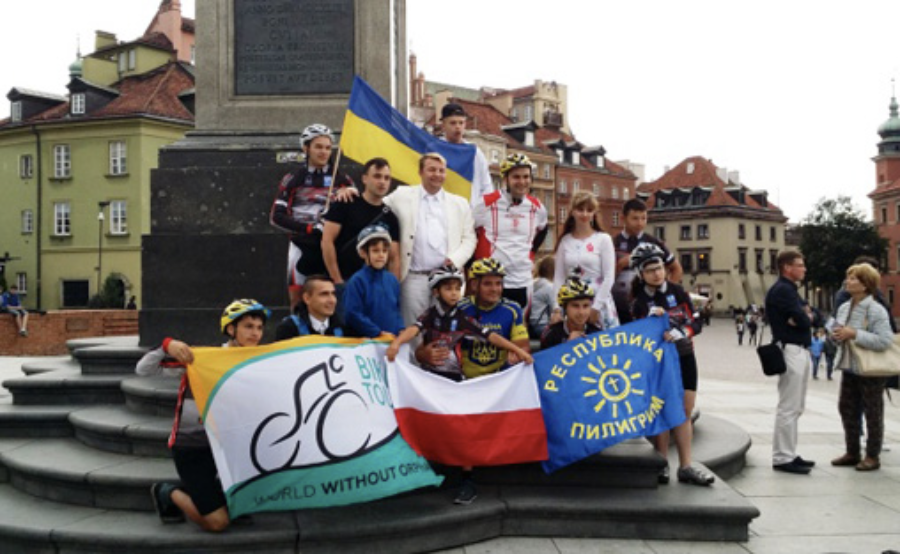 Through 7 polish cities the bike team in the number of 15 people rode under the motto “The world without orphans”. The initiators of the touristic and enlightening event from the orphange “ Republic Pilgrim” in Mariupol agitate the Europeans not to be afraid of adopting the orphans and to courageously take in their families not only healthy kids but also the orphans with special needs.

The director of the orphanage who himself took under his guardianship 32 street  kids, pastor of the Church of Good Changes,  Gennadiy Mokhnenko has been carrying out with the kids under his care the worldwide bike “ The world without orphans” action. Before the Russian aggression on Donbass they were riding through the entire Russia and now their course lies towards the West. After Lublin and some more polish cities the kids had been to the polish capital and near the Royal castle in the old city and the partakers of the actions had a meeting with the inhabitants of Warsaw.

Skilled in preaching  the pastor Gennadiy Mokhnenko made a real show at the statue of Sigmund Freud.  The kids were telling their stories about their life without parents they would get sick and were hungry most of the time and then they met good people on their way and now the majority of them live in families. The kids were singing and even boxing.

Through the orphanage founded by Gennadiy Mokhnenko 3500 kids passed. Some of 32 of his adopted kids have grown up, created their own families and now Gennadiy and his wife Olena have 7 kids under their care plus three of their biological kids.

But let us return to Warsaw. Dressed in the uniform of a Ukrainian champion, this  well -set Ukrainian religious and public statesman from the Donetsk area told to the people in Warsaw about the life stories of some kids who take part in the bike tour, he compared orphanages in Poland and Ukraine, calling unto God he on behalf of Ukrainian people thanked  the Poles for the support since he himself took part with his countrymen in building the fortification constructions around Mariupol and it stopped the Russian aggressor.

– I thank You, Lord that the polish people support Ukraine in this trouble times of war. I ask you for there to be no orphans in Poland, In Ukraine and in the entire world and for all the kids to wake up in families and for each child to have their Mom and Dad. – Gennadiy Mokhnenko stated.

On their way through Poland the team of the former homeless kids visited Zamosx, Lublin, Gavrolin, Warsaw, Branshik, Bilostok, Augustuv. The longest period of staying at the cities were in Lublin and Warsaw (3 days in each). The LublinTV channel devoted to the mariupolites the video report in their news block.

One of the organizers of staying of the mariupolites in the polish capital a man from Gorlovka, Vladimir Kovalenko used  to be at the Euro Maidan  Warsaw and he shared that has been knowing the team for awhile now since their leader Gennadiy Mokhenko is well known man and not only in Ukraine. In Lublin for instance the adoptive family with 4  adopted kids from Krakov came to see the team. As it turned out they had heard about this activity of this man from Mariupol and it was him who inspired them to adopt their kids.

The news about the pastor of the Church of Good Changes also reached overseas where they made a documentary about this Ukrainian man the extracts from which we are hearing now:

–    We are riding around the Globe, it is a trip of the former street kids – now they are adopted by us and we inspire people to adopt orphans. The action has a name “Ukraine and the world without orphans”. We motivate people to adopt kids and we believe that all kids must live not in orphanages but to wake up in families and to hug their Mom and Dad.

– I am a director of the largest at the territory of the former Soviet Union children’s rehab center for street kids, its name is “Republic Pilgrim” and also I am an adoptive father of 32 kids. – Gennadiy Mokhnenko shared.

– Even though there is war around our city and it stopped our bike tour for 2 years we still decided to keep on our bike action this year. We have ridden 9940 miles. One can draw a line of our bike tour from Vladivostok  till Moscow, Kiev and now – till Lviv and Warsaw. From the capital of Poland we will be heading to Baltic Coast and Scandinavia.

We intend in the nearest three years to go around the Globe riding for two month each summer and in such a way to motivate people to adopt orphans, – Gennadiy Mokhenko shares.

– We have got hundreds of stories of people who adopted kids due to our activity. Three days ago one family came to see us, they are the Poles, living in Poland and one day they heard my interview and then followed  our bike tour online and then they decided to take 4 kids in their families. And there are many of such examples. When people attended our performances, concerts, services in churches and read our interviews or watch a film they get rid of the fear and stereotypes and adopt kids – Gennadiy Mokhnenko admits.

– Some people adopted kids with special needs, others – with HIV+ status, some adopted a kid without a hand ot a leg. We see that when we tell our story people get rid of their fear. There are a lot of myths about adoption, people are afraid to take an orphan but we successfully ruin those myths – Gennadiy shared.

Among the partakers of the meeting of the cyclists from Mariupol with the inhabitants of Warsaw was also a priest from a protestant church –   Ivan Krasnoshapka.

The participants of the bike action “World without orphans” 2016 will get back home in early September. If someone who was present at the meeting within the bike tour will come to the decision to adopt an orphan they will send an email to Gennadiy Mokhnenko (by his request). It has become quite a tradition now.