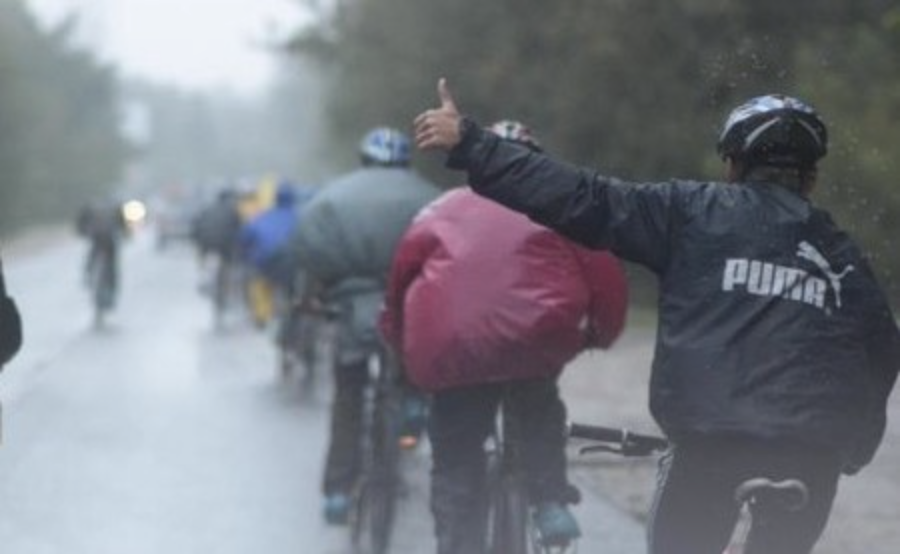 Continues the bike action "Russia and the world without orphans." Leaving Penza, participants headed to a new city Kuznetsk. Struggling with the weather, the rain guys rode about 80 kilometers. The road was very difficult and only eight most persistent guys drove that day until their final destination, others were forced to diver in the vans. It is because of bad weather, the team had an unplanned stop in the village Chaadaevka where, with the help of the Minister of Education of the Penza region, children were placed in a local school. Special maternal care showed director of Chaadaev School.

“She was just like mother. She sat with us for the night, worried that we did not sleep on the bare floor, helped with the organization of dinner. Early in the morning, while everyone was still asleep, she came from the other side of the village to school to prepare for our departure. It was for us a real gift from God “- told the press center of the alliance coordinator Daria Bratischev.

As an answer to the prayers of the team was a great weather, which, contrary to the predictions of meteorologist, accompanied the children the next day. August 27 arrived in Kuznetsk, where they had all planned activities. Residents of the city have had a warm welcome, and at the end shares cyclists set off. On the stretch-Kuznetsk Syzran in the column caused a serious accident. Helping the younger rider, one of the older guys, Slavik, was injured. To avoid hitting a moving car with Slavik took the hit hard and fell to the track. With a broken collarbone, he was taken to a nearby hospital in Kuznetsk. A day later, he was transferred to a hospital in the city of Togliatti, where he was met by the staff of the MOH. Local experts have concluded that the surgery is not necessary right now! There is a chance that all would great! In connection with this the team asks for special prayer and support of Slavik!

August 28, traveling 120 km, boys entered Syzran. The bike tour met local administration, as well as a team of local cyclists. All participants were welcomed by the musical concert of local musical groups. . After a street event, cycling team was invited to a pastor’s meeting, which was attended and joins the team one of the founders of the “You will be found” – Sergey Demidovich. The participants of this bike action told us that, these two hours of communication were quite fruitful. At the end of all of their meetings children settled in a hotel where they can rest and gather strength for the next day of cycling.

Press center of the alliance “Russia without orphans”