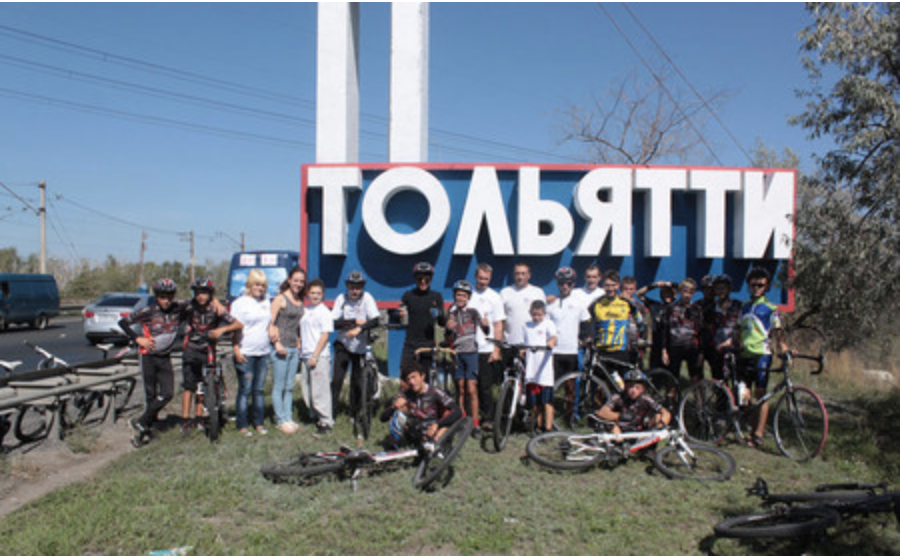 On August 29 team of the bike tour "Russia and the world without orphans" left the Syzran. As we wrote, on the way there happen a little trouble, Pastor Gennadiy fell ill, after that we had to call an ambulance. Medics took Gennadiy to the hospital in Togliatti, where he was diagnosed and treated. Today Gennadiy Mokhnenko feels much better, but still, will continue until the path is not a bike, but in the van.

Happy cycling team moved into a hospitable Togliatti. Here guys stayed for two days, and this means that they will have time to rest. Whole team settled into the local hotel “Rainbow” kid provided soft beds and increased five-a- day meals.

As in all cities in the path of cycling in Togliatti was organized solemn street action. The chief director of the youth drama theater in Togliatti Dmitry V. Kvashko took care of organizing a great holiday in a family atmosphere.

Also, especially for t he meeting of our cycling tour the local theater team composed a song. According to Dmitry Kvashko this song was written by one of the actors of the theater team when he learned about bike tour “Russia and the world without orphans.” The other guys picked up the idea and wrote the song. According to the head of the alliance “Russia without orphans” Ivan Iklyushina, this song sounded very precisely:

“When I heard this song, I had tears welling up. So it is fun, so penetrates the hear, and we talked with the authors of the songs could publish it for non-commercial can be used, and in order to allow more cities to sing it, “- said Ivan Iklyushin

In the evening in Togliatti was another conference “Russia without Orphans”, which, in addition to cycling team, was attended be the project proponent of national adoption Demidovich Sergey (Ukraine) and the head of the alliance “Russia without orphans” Ivan Iklyushin. Also, for a few hours to a conference called in Gennadiy Mokhnenko. Contrary to the persuasion of doctors, Gennadiy temporarily left the hospital to attend the event. Not fully recovered, he again wants to continue the mission!

Also good news on the Slavik Smyslov, who the day before, protecting young cyclist from a collision with a car, had an accident. Slavik rejoined the team – with a bandage on his hand, but with a cheerful spirit. Of course, he will not be allowed on the bike anytime soon, but more importantly, that he was again with the team.

We ask all believers to continue to have a prayerful intercession for all those who organized and participated in the Tour, “Russia and the world without orphans”, and for all who hear the message about adoption!