Family from Charity Fund “Pilgrim” became “Pride of the country”. 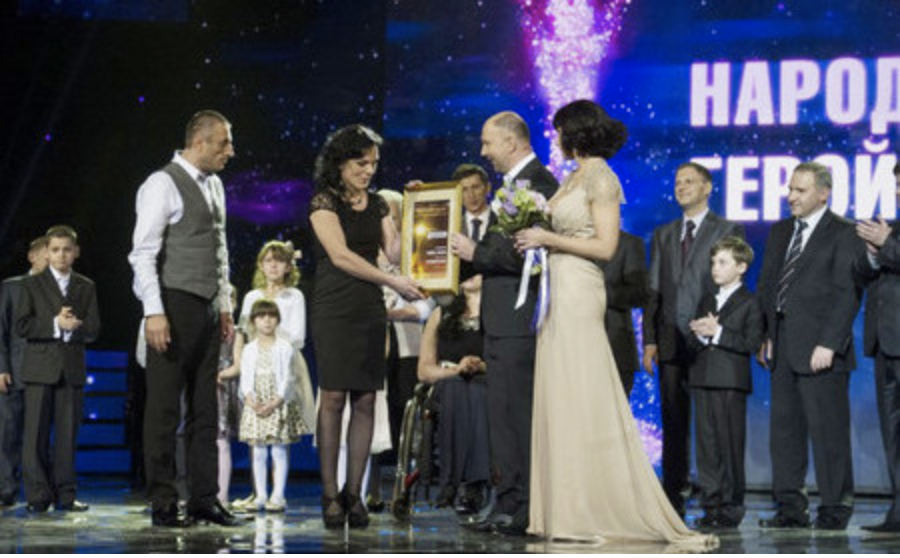 A few days ago in Kiev took place the official ceremony of awarding the winners of National Award "Pride of the country." In two categories "Family History" and "People's Hero" winners were announced, the family from Mariupol from Charity Fund "Pilgrim", Eugene and Svetlana Isaev, who became first in the country to adopt HIV-positive children.

“But what we are not heroes. No we are not heroes, we are simple people,” – this was the first response of Svetlana Isayev, which she said from the stage of the national opera house.  Ministers and politicians, top managers of well-known companies, and business owners were listening to her speech. All of them, and others present were standing on their feet welcoming Svetlana and Eugene Isayev, who were winners in two categories of the current premium. Now family has 11 children, seven of whom are HIV-positive.

“I get charge of light, good, pure emotions. In the name of these people – we need to work to make something better. People need to live better in this country. “– Noted the founder of the award “Pride of the country,” Viktor Pinchuk.

Prize in the category “Family History” Isaevs were rewarded by the Advisor to the President of Ukraine, Anna Herman, who demonstrated across the country, that HIV-positive children should not be marginalized; she came to stage, and kissed and hugged each child.

“I think we should work hard to show good cause, because now a lot of negativity and it’s not always good. We need to treat ourselves more critical. “– said to the reporters deputy Prime Minister Sergei Tigipko.

At one time, more than critical, attitude was toward Eugene Isaev, who one of the first in the Donetsk region was diagnosed with HIV. Family history of Isaevs – is the story of how a healthy young woman, despite condemnation of relatives and associates, she married a man with AIDS, and after loss of newborn babies, she became a mother of seven HIV-infected children.

“The guys, 12 years ago barely made it alive to our rehabilitation center and the” Church of Good Changes “… Now they are popular heroes! Room with senior officials, artists, athletes, ministers and ex-president, with tears in their eyes, standing up, applauding to those whose measure was a completely different life, if not the gospel. “– shared his emotions Director of the Fund “Pilgrim,” pastor Gennadiy Mokhnenko.

Working in the charity fund “Pilgrim,” Isayevs decided not to stop on the adoption of the first two boys. Inspired by the idea of ​​director of fund, Pastor Gennadiy Mokhnenko that Ukraine should be without orphans, Eugene and Svetlana continued to take custody of children affected by HIV. The Fund “Pilgrim” all these years actively assisted the rapidly growing family: purchased and renovated a house, bought a van.

Today, a large Isaevs family confident that any difficulties can be overcome – is important only to love and desire to do well to others. They were able to show by example to the Ukrainians, it is not scary – to adopt children, even if they are very sick, that every child has the right to family and love. History of Eugene and Svetlana moved so many Ukrainian, and they received most votes, and became “National Heroes”.