Food kits for soldiers and a prayer for the enemies. Drive with chaplains to the frontline near Mariupol 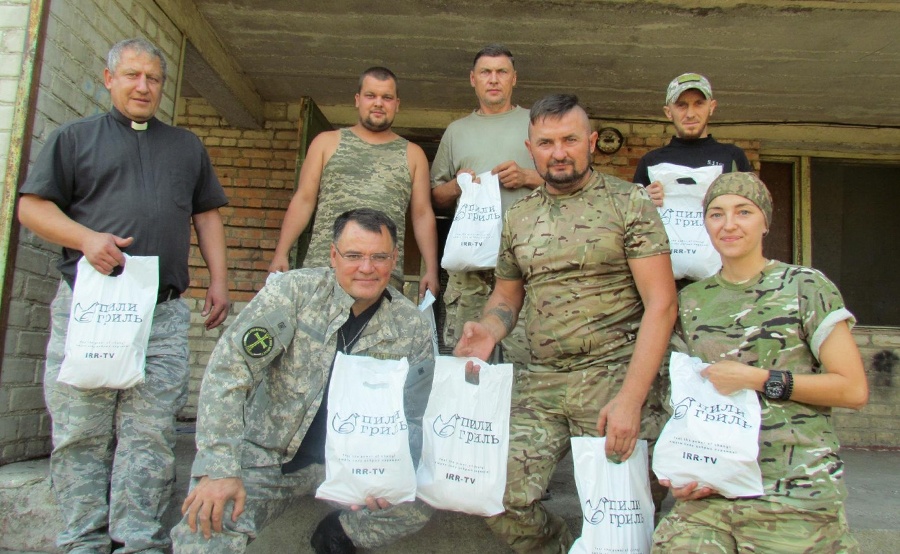 The problem of providing soldiers with provisions remains relevant from 2014 onwards. Despite the complete revision of the product set for the military at the front line, its addition and modernization, the defenders of Ukraine are still glad to receive volunteer help. “Not my mother’s meatballs, but still a good food. I ate it myself with a great pleasure “- smiles pastor Gennady Mokhnenko, the founder of the children’s rehabilitation center «Republic Pilgrim» and shows American food kit, which he was going to take to the frontline near Mariupol.

Another food surprise for Ukrainian fighters is fresh chicken meat. Gennady Mokhnenko said that in the village of Chervonoye (Mangush district) Pilgrim built 19 houses for settlers and, among other things, organized a poultry farm where they will grow poultry for their own needs and for volunteer assistance.

Yesterday, on September 5, the chaplains Gennady Mokhnenko and Albert Khomyak set off along the front line to take 40 chickens and more than 20 food kits to the military. The start of the trip is assigned from a family-type children’s home to the East.

Just before leaving, Gennady is introduced to the new pupil of the Pilgrim. This is a teenager Bogdan from the Dnipropetrovsk region. He tells a standard story of a guy from a dysfunctional family, who could be «sticked» to the street. Bogdan does not have a father, and his mother abuses alcohol. «I’ve been drinking myself for three years already. Vodka and «Jack Daniel’s»» – so scary is this confession from the mouth of a 12-year-old guy. Gennady Mokhnenko explains to Bogdan that this is not a subject for pride. «A really cool one is one who studies well and has boxing muscles» says the pastor, showing his muscles. Later it turns out that Bogdan speaks well in Ukrainian, and Gennady asks him to become a personal tutor. The teenager agrees with pleasure and hurries to a lesson in his new home.

“Pilgrims” make a general joyful photo with products that will be taken to soldiers. Some children asked to be taken on a trip with pastor, but he assures kids that lessons are more important for them now than volunteering. Positive talk with children is coming to an end and the way starts on the military roads from one front-line village to another.

Time on the road flies quickly if there is a good company. Pastor Albert Khomyak is driving. He is concentrated and stingy with words. He mostly calls up fighters and commanders, warning them about our visit. At the same time Gennady Mokhnenko is cheerful and talkative. A clergyman, though constantly talking about the fact that he is already old (celebrated his 50th birthday in February in positions near Pavlopol) charges with his energy and optimism. He says that he recently read a sermon on “The best time of Ukraine is now”. According to him, no matter what, it is really so. “In 1223, the Slavs lost the battle of Kalka and could not stop the Mongol, and we are now holding the borders on these lands for the fifth year,” says Mokhnenko. Pastor is sure that modern technologies and visa-free travel have made life of Ukrainian youth more interesting and easier. The pastor knows the front-line roads like his own five fingers. About each primer and each landing, he tells short, funny and tragic stories that best convey the atmosphere of war. “We made 4 «round-the-world tours» riding to front-line villages and «killed» four cars on them.Now we are «killing» the fifth. We happened to be in places where no OSCE has been to, “says Mokhnenko, and meanwhile the car jumps up on another pit.

The situation, according to him, is now calmer, and in 2015 he went to Granitnoe “under the cover of artillery.” “Priests bring water and food under the cover of artillery after a call to the commander. It can make you crazy, right? “- he recalls. Pastor laments over the fact that in the 21st century, when private companies manufacture spacecraft and taxi-helicopters appeared, such a thing as “war” remained on Earth…

During the conversations we didn’t notice how we passed Novoselovka village. After this settlement it becomes clearer that further combat operations are taking place. Sown fields are becoming less common. More in the field grows grass, and the curbs keep the memory of mine attacks. The section of the road to Granitnaya, which is well shot through by militants, the chaplains called «A Road of Life”. “It’s time to pray,” says Gennady Mokhnenko and begins to pronounce the words of prayer about … enemies of Ukraine. He asks God to teach the enemies, give them the wisdom to repent and return home with an awareness of the crimes they have done. «Lord also bless us on our trip and let us please our soldiers,»  – literally with these words we go to the checkpoint in front of the village.

After a short reconciliation at the checkpoint, where chaplains give soldiers several frozen chickens, we leave for Granitnoye. The houses store memories of the hot battles of the offensive campaign, when the Armed Forces and volunteers managed to return the villages to Ukraine and beat them off from the pro-Russian mercenaries. Clergymen say that before the war in Granitnoye lived 6 thousand people, then most left, but recently 70% have returned again.

Since 2014 Granitnoye has become the epicenter of military operations. Local residents suffer from shelling, and the area around them remains mined. About life in Granitnoye you can read in the material 0629 School in Granitnoy: the territory of life, – REPORTING

Leaving on the outskirts of the village, we call up the soldiers, who are located in the village. They live in the former hostel, which they themselves equipped. The commander meets us near the gate and greets chaplains. They talk about their activities and the history of Mariupol since 2014. “Behind your backs are our children. Thanks to you, our children go to school on September 1st  during five years, “Gennady Mokhnenko said. After the chaplains learned that they are a deputy from Mukachevo, they joke, in case of danger he can go home “and we have nowhere to run and hide.» The soldiers laugh and say that they will go only forward, freeing the territory from the invaders. It was decided that after the war, every serviceman who defended Mariupol could be a guest in the newly-built house of Albert Khomyak. After that the unloading starts. Frozen chickens and food kits are carried to the kitchen. This will complement the soldier’s dinner.

During a conversation in the courtyard a serviceWoman  suddenly calls out Gennady Mokhnenko,. After a short bewilderment, he recognizes in her volunteer Oksana, who in 2015 came to the “Pilgrim” and brought bicycles for the children. Now, as it turns out, she signed a contract with the APU and serves the Motherland in mortar calculation. Behind the back of Oksana, fighting in Peski and Zaitsevo, and she calls the stay under Mariupol – her «rest». Before the war, a woman lived in Warsaw, but came to Ukraine, because she could not look at her homeland, which is in danger. “I left both Warsaw and my firm and came here. They say that we are only fighting for money here. It turns out, not for money at all … “, she says. Instantly the commander was determined to make Oksana coordinator for work with the chaplains of Mariupol. In her new position, the serviceman conducts a short tour of the location, shows where the cap is, and makes up the company at dinner.

Soldier’s soup is for conversation and revelation. Mokhnenko said that it is extremely important for servicemen in the East to understand that they are supported by the local population, who feel support in them. The soldiers, meanwhile, talk about the living conditions in Granitnoye. They say that it will be cold in the winter in the location, but they will be basking with small heaters «In Zaitsevo we lived in a destroyed house and survived. We are still alive! “- Oksana smiles.

Request for the icon

After eating, agreeing on further cooperation, the chaplains went on. The next point was the location of the fighters in Chermalyk. There, on the gates of an improvised military unit, there stands Igor the soldier, a native of Krivoy Rog, who is a parishioner of the Church of Good Changes. The soldier said that he had recently been at home, had a rest with his wife, and soon would go on to continue his service in Krasnogorovka, where he would most likely stay until the end of the contract. Igor says that his wife intends to move to Mariupol. “Move, of course!” The clergymen encourage him.

The soldiers gratefully receive food kits and soothe the clergy, saying that they will not retreat exactly. “We gave the oath!” The young commander responded simply and casually, and these words sounded even more convincing. Chaplains and fighters say a prayer for peace in Ukraine, asking for the protection of higher forces and victory for the fighters of the APU. The conversation ends with a joint photo and a friendly farewell.

The next location, where we need to bring a humanitarian aid – the location of the soldiers in Pavlopol. A few kilometers from their home base there are already located terrorist groups, whose snipers do not let them relax even during the day. Chaplains easily find a military unit, because it was where Gennady Mokhnenko celebrated his 50th anniversary. He tells the soldiers that one of his adopted sons served in the company of the deep reconnaissance of the 131 battalion in the area of Pavlopol. «My son has his breast in the orders,» – says Gennady Mokhnenko about his boy –  «He compete with me constantly: who will climb faster up the mountain, who will pass faster on the bike, but now who has more awards,» laughs the pastor. The soldiers gladly listen to the story of civilians, especially those that concern the war. So they understand that they are not “strangers”, and their world view is by no means far for civilians living near the frontline.

The servicemen say that now the situation is rather calm, but the fact that there is no “war” and “truce protects against shelling is not true.” They take food kits from volunteer priests, especially rejoicing it, because they are easy to take with them to the «trips». Servicemen do not complain about the service here, also not wanting to give up positions. They did not ask us to bring any uniform or products. The request to the chaplains was of a spiritual nature. “We would have an «Unbreakable Wall» icon … This is the best, but you can also bring St. Nicholas one,» – said the senior in rank to the guests from Mariupol. The request was heard.

When the car was empty of humanitarian aid, it was time to return home. The Chaplain’s minibus quickly flew to the city through Talakivka. In a relatively calm and far from war Mariupol, the surrounding seems a bit surreal. Literally 30 km to the east, and the pricelessness of simple things – safety, food and the trust of loved ones – is becoming extremely palpable. “Peaceful city” with its expensive clothes shops, cinemas and entertainment centers seems a mockery of real life.

This was not the first and not the last trip of clergymen to the defenders of Ukraine to the front. Spiritual help, material assistance – all this gives strength to Ukrainian fighters and helps to forge victory.