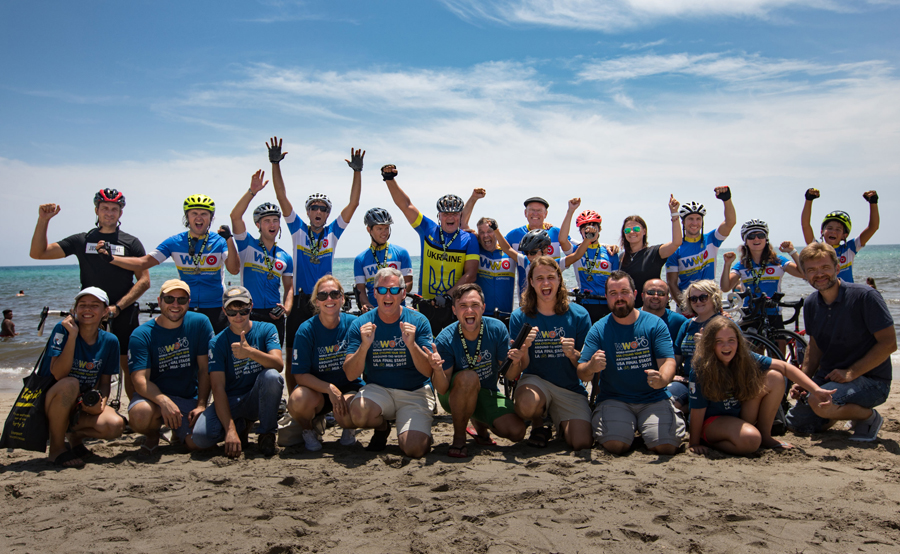 The last 5 thousand kilometers passed in 3 months in 12 states of the United States of America from the Pacific to the Atlantic Ocean. The team of Pilgrims led by pastor Gennady Mokhnenko completed the round-the-world tour, claiming that the dream of a world without orphans moves across all countries and continents, and this process can not be stopped.

Beginning in 2011, when the cycling team overcame the first hundreds of kilometers of Ukrainian roads, no one thought that the idea to proclaim a dream of a world without orphans would grow into a major project, and for 6 years of round-the-world cycling, teenagers, adoptive parents from Mariupol will travel 27,000 kilometers around the globe, that hundreds of thousands of people will be involved in this process, hundreds of organizations that continue to make the dream come true – the world should be without orphans.

Gennady Mokhnenko, the leader of the cycling team, the founder of the «Republic Pilgrim in Mariupol», the adoptive father for 33 children, the president of the charity fund Pilgrim: “One of the eerie myths about adoption is that the children of addicted people and alcoholics genetically inherit these problems. Because of the fear of this devilish nonsense, millions of orphans are left without a family. Because of this stupid idea, hundreds of thousands of people do not make one of the best steps in life. We call our team “Mythbusters”. Do not believe Satan … If you can – take the orphan into your family! “

According to Gennady, many professional cyclists said that it is unreal to commit. Those of them who joined in the beginning of the road – gave up, saying that it’s impossible to go in such a rhythm and style. But what can better inspire and accomplish the feat than the real stories of people who decided to take the orphan into their home. Thousands of new lives, changed fates, about which the participants of the bike-tour read in the letters received, listened at first hand, meeting and getting acquainted on the way with foster families and children. Here are just some of them:

“Good afternoon, I wanted to support your ministry and your work with our testimony.” Through your work four orphans have appeared in our life, and they are no longer orphans, and the day before yesterday we wrote another application for replenishment with the fifth child. Your work was not a waste of time! Sergey”

“Brother Gennady, we rejoice in your achievements and follow your movement, God grant you strength and patience in your business! Your ministry and the feat of your team were one of the aspects that spurred us to adopt.We have been striving for this dream for almost 3 years – adopt a child! And yeasterday we received a decision and after 2 months we will be able to take our son home.

Thank you for this passion and love for orphans! Greetings from Sweden! “

“It’s been two years since I became a foster mother to three children!Theoretically, it was difficult to decide for one, but your sacrifice and the price that you pay helped us to believe that there was something great in it and make a step! I’m proud today I have an absolute contact with them, life itself has become my side! It is rightly said that, having sheltered an orphan, we shelter God himself! “

“Gennady Viktorovich, in your dream” The world without orphans “- minus one.Now we have a foster son! Recently, we took the decision from our collegue, thank you for the inspiration – it helped us to decide …” Michael.

“Gennady, good afternoon! We took a girl from the orphanage, the process of preparing the documents was long.Now we have taken her home! We also want to take two more, now we are developing friendship with them.In Belogorsk, the Amur region, we met. Thank you for this bike tour !!!! “

“Shalom, brother Gennady, once you were in our city, and we had a good simple conversation with you! Today the Lord blessed … We have a baby in our family 1 year and a month old !!! She is from the orphanage … We adopt her. We want you and your whole team to share our joy !!!! Praise the Lord for everything !!! ” Sergei

“Pastor Gennady, after seeing the film about your service” Generals of Streets “, my husband and I moved in adoption, now we have a daughter from Donetsk, we took her two weeks before there started a madhouse (sorry for the word). We think that this is not the end for us.The doors of our heart are open.I just want you to be glad for a moment in the pain that you are experiencing now.There are fruits of your work everywhere: just hold on to “

“Thank you, Brother Gennady, personally I do not know you, unfortunately, but I pray for you and bless you. Your preaching and what you do with your sons has changed me and I have adopted two children. I support you in your position for Ukraine, you’re a good person, a real man … “Timur

“Our family also decided to take this step, we adopted six children, we bring up 11 children, let God bless you, and strengthen and let your hands and knees not faint…”

Gennady Mokhnenko is convinced that after a few generations of the generation living today, the adoption culture will work in full force, and there will be fewer and fewer children around the world who are deprived of parental care and a real home.

The last stage of the worldwide tour became the most intense, but also the most highly organized. The Serving Orphans Worldwide team has been with the team for all three months. They organized the last stage of the bicycle action through the USA, sharing the difficulties of a huge campaign, giving their time and considerable forces to spread the dream of the World without orphans.

In the process, a small Mariupol team was replenished by the Americans, who traveled hundreds of miles to travel the next mile in support of the call for the World without orphans. On the way groups of people joined the cyclists,groups of people who support orphanages in Thailand, American foster families, in which there are also a lot of children from Ukraine, ordinary people, in many countries of the world,they took bicycles in their cities and dedicated their rounds to the round-the-world. They sent photos and videos with words of support and complicity to those who in practice daily passed 100-120-kilometer distances, overcoming the incredible heat of hot American deserts, mountain rides and downpours, met with thousands of people, telling their life stories and inspiring for adoption . Groups of volunteers conducted actions in the field in support of the worldwide tour, earning money and telling people about a noble goal.

Several major television companies in America were reporting on the movement of the team and the idea of bicycle tour, recording programs with former Mariupol street children and broadcasting them on many TV channels.

Organizers of the American transition have included in the program days of rest for a team of cyclists. The guys were able to relax in the famous Disneyland, visit the historic places of America and one of the largest aquariums in the world, take a dip in the largest river in the world – a river of Mississippi and relax in the amazing national nature parks. It was not without an extreme. Several dangerous falls from bicycles and unintentional bathing in a lake with alligators added adrenaline to the process of the longest stage of the worldwide bike tour.

The fact that the Mariupol former homeless children led by Pastor Gennady were able to launch a large-scale campaign against orphans all over the world is worthy of respect and acceptance, as evidenced by the responses of people who have picked up the dream.

Bazalev Mark: “On behalf of the churches of the states of Kentucky and Tennessee and the international fund” BRIDGES OF LOVE “, as well as all those who are not careless, we were glad to welcome the participants of the round-the-world bike ride” The World Without Orphans “, the route of which ran through these states”

… The harsh heart of Gennady Mokhnenko, which only God could open to meet homeless children and orphans, surprisingly accommodates all children and adolescents who so need the example of a real father! And it is for them, whom parents abandoned who were abandoned in ditches and under fences and who for some reason were  unneeded in their own country, he leads this service: he risks his life and position, twists pedals along with them, talks hoarsely about that reality , which fills their life, sings songs, reads poetry and rises before dawn, to go out on the track and continue the AMERICAN PART OF THE BICYCLE WORLDWIDE TOUR!!

Gennady is a real father, a friend and mentor to these guys, and they are real and faithful children !! He, of course, can also be a hero, but first and foremost, he is just a normal and real PATCH, a real MAN, a devoted SOLDIER, a dedicated CHAPLAIN and many more normal things that we lack in our lives! Without cheap lies, without rolling your eyes, without deep blissful sighs, without super-righteous calls for universal love! It’s just that – as it should be – from the heart, from the heart to the end !!! “

The team of the last American stage of the round-the-world bike-echelon thanks the organizers of the tour, and everyone who, during these 6 years, became an accomplice, an enthusiast of the movement against orphanhood, who continues to work in this direction.

Gennady Mokhnenko: “Thanks to everyone who prayed for us, to all who passed our HEART-Kilometers with us, to everyone who gave us a glass of water and a piece of bread, who fed to the dump, who rode with us and supported us morally, who helped with overnight and made an outpost in social networks. Your contribution is great in the eyes of God. We are doing our common cause, and this can not but rejoice. Thank you to everyone who heard us and took the children to their families! All together, we did it – closed the circle on the world map. In the beginning, we simply believed, and now, thanks to hundreds of testimonies, we know that every mile we travel increases the number of hearts sent to orphans. Together we go further … to the dream of “World without orphans”! “