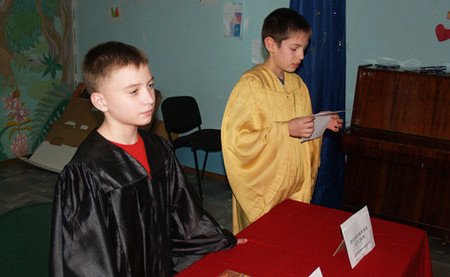 These days the trial court in the state of former street kids took place. They investigated scandalous demonstrations of roughness of senior pilgrims towards minors. In spite of the complexity of the case the judge, persecutor and lawyers have perfectly solved the task: convicts were punished in accordance to the strict laws of “Republic “Pilgrim”.

At the trial court all the citizens of republic were present as well as mentors, a supply manager and a principle. At the dock there were senior pilgrims Nikita Gavrilov and Arthur Krasnoshiokov.

The judge Dmitry Pliskach started the trial court having invited to testify the first witness of the case of roughness. Lyosha Chernyshov had the word with his hand on the Bible. To the general surprise he lost heart and said he never saw any roughness from either Nikita or Arthur. Sasha Chebotaryov testified against Nikita. According to him the senior pilgrim offends minors. The next witness shared that Arthur called Bogdan Savchenko (judge’s assistant) Bugs Bunny.

The mentor in chief Victoria Vahnova reminded to all present that at the territory of the republic any nicknames are forbidden (except for those which their owners like).

Deacon Yuriy Andreevich testified that he many times saw roughness from Nikita and rebuked him.

Further, grown wise Yuriy Andreevich shared his life experience: “ In my childhood I also teased a squint girl. At the age of 12 I traumatized my eye and became sight invalid for my entire life.” Then Nastya Nesvitaeva testified against Arthur. When he made an attempt to protect himself his lawyer didn’t let him speak. The advocate of Arthur 14-year-old Misha proved that the girls come up to Arthur by themselves and provoke him. The judge Dima Pliskach reminded in response that in the case somebody teases you, don’t react yourself but lead the violator to the mentor.

The next witness was a tiny girl named Inga, on putting her hand on the Bible she started telling the court how Arthur tried to push her. In response terrible chaos came to the assembly hall. The judge called the audience to the order. In consequence it was found out that Arthur didn’t mean to offend little Inga – he just called her to registry office for fun!

Many minor kids are afraid to testify against senior guys, but the principle of the center heard the complains about so called jokes from the minors not once.
12-year-old Sasha Zenich testified: “Arthur kicked me for fun. But it was painful. But then Arthur begged apologize”.

The lawyer Misha Bushelych stood up for Arthur. He started specify the details of above events and proved that some witnesses exaggerated. Thus, the advocate of the convict asked the court to minimize the punishment for his client Arthur because “he is not well brought up and they provoke him!”
The guys stood up also for Nikita Gavrilov. Nastya Gurkova reminded to the court that Nikita often helps the mentors to keep discipline. And his lawyer Kolya Yakimenko pointed out that Nikita never disciplines 8-year-old Tolik Samoilov who often provokes him, he always takes them directly to the mentor.
According to the results of the trial court the judge read the verdict – 10 days of punishment for both convicts. For Arthur 2 hours a day of the work in economy brigade (to help in plumbing and etc. to the deacon Yuriy Shakhman) and Nikita will have to clean the corridors and stairs of Pilgrim within this period.

The principle of the center of children’s rehabilitation “Republic “Pilgrim” Tatyana Karpuchina called Arthur and Nikita to the sincere repentance and as for the cowards who were scared to testify against those who offend them – she called not to cover those who do evil. For the court is not to suppress the convicts but to help them to correct.

Somebody may consider that to make a trial court within children’s establishment is not humane but this approach is efficient. The children know that they live in the collective and must reckon the norms of behavior in Christian orphanage as well as cherish the opinion of their fellow citizens.