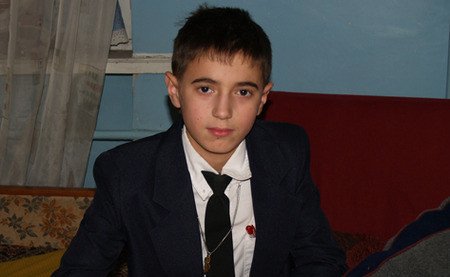 A teen with unbalanced psychics who used to snuff the glue refused to study and wandered he barely got to mental hospital of the city Uzhgorod (Western Ukraine). However, on arriving at “Republic “Pilgrim” less than within a month 14-year-old showed his smartness and willingness to partake in each event of the state of former street kids.

The parents were ready to send Misha to the asylum because of his uncontrolled and inadequate behavior.

His Mom has recently repented in a Christian church. She got to know about the children’s rehab center which functions on the other side of Ukraine where the teens of complicated social category live. And one day in the office of the Principle of “Republic “Pilgrim” the telephone rang which consequently radically changed life of Misha. His stepfather informed the Principle Tatyana Karpuchina that the boy has very low IQ that he has mental problems and factually it’s necessary to take him to asylum.

The management of the charity fund “Pilgrim” has never refused to help those parents who are unable to raise their kids.

Misha’s case has amazed the mentors at once: the boy behaved so inadequately, no approaches were effective for him. He didn’t follow any instructions, pretended that he’s got a pain in his heart, and made hysterical scenes. In the first day in the office of the principle he started beating the wall with his head and shouted: “Call the ambulance I am not going to stay here!”

However after a short time Misha realized he had got to very unusual orphanage. Having calmed down he found out that they have their own state here, their own system of government. And being a very ambitious person the boy began to participate actively in every event. The busy program of contests and stuff made the hyperactive boy seriously interested in. And the ideas started flowing down from him like from the horn of plenty and he started embodying them at once.

So during the setting of the book’s club where the children and mentors read the books aloud, Misha saw how many various books there are in “Pilgrim”. First he helped to fix broken books and then he started classifying them. A bit later he showed the initiative to organize a real library. He signed the shelves according to genres, made register books and a book of complains and offers. He’s got an assistant – an 8-year-old Anya Zenich.

Zest of the library is literature in English in the case if some guests would like to borrow a book to read. Presently the library works actively for the children as well as for adults. Misha calls the latest to come to raise their stock of knowledge.

Misha Bushelych: “I have adapted to living here, found some friends. I like the mentors here. I can do anything here but smoking, drinking alcohol and snuffing glue. It’s ok to live with God. I’ve given up using harsh words”.

The next idea of the boy is to organize “Club of learning Ukrainian”. Being ah inhabitant of Western Ukraine Misha speaks very good Ukrainian that is uncommon for those who live in Eastern Ukraine. Misha even sometimes corrects the teacher of Ukrainian in school.

His participation in the recent trial court showed that the boy can make a talented defense of the convict, gives facts and evidence to the court and proves his client’s innocence like a real lawyer.

The principle of the center Tatyana Karpuchina tells about limitless inquisitiveness of the boy that he showed at the Bible lessons many times. In difference from other guys he asks very deep questions, for instance, about the purpose of planting the tree of Good and Evil in the mid of paradise, about the possibility of repentance for the fallen angels and even about unequal marriages (in the context of discussing 1st Cor. 13) Answering the question why he knows Bible so well Misha answered that he’s been learning it since he was 6.

Wonderful changes happened to Misha in “Pilgrim”, turned him into completely adequate child who shows initiative, tries to do well at school and shouts with bewilderment: “How could I mind staying here?”