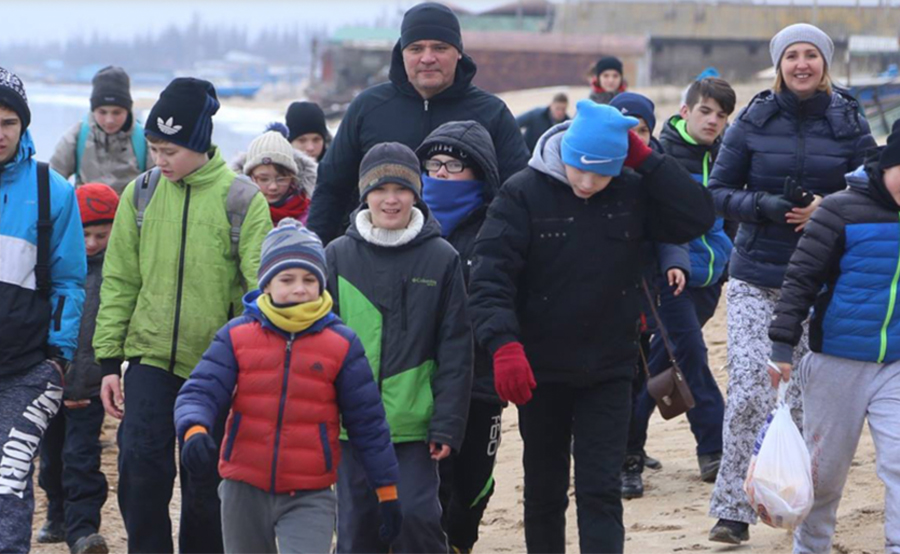 The adoptive father of 33 kids , the chaplain of the Ukrainian army, the founder of the largest children’s rehab center at the territory of the former Soviet Union “Republic Pilgrim”, the Mariupol pastor Gennadiy Mokhnenko gave an exclusive interview to the portal 49000.com.ua.   The public figure told about the war, about raising kids and about main mistakes  in life.

– How did you get into religion?

–  I got back from the soviet army in 1989. My family was captured by alcohol. My parents and my sister were drunkards. My sister had two kids and her husband drank too. So basically I came back and go to hell. I buried my close friend who was killed in Afghanistan and we literally were very close friends for 5 years. So it was the time when I was trying to find the way out I life. What occurred to me first is that I need to earn money and to send my parents to some sort of therapy. Psychics, charlatans and eccentrics offered help in the treatment of alcoholism on every corner. I started working. I worked a lot and earned good money. I created my own business project. Suddenly I saw that money does not solve the problems of my loved ones. Charlatans took money, but no one could help. Then there was a serious religious search in my heart . For several years I studied religious and philosophical literature. The more I asked questions, the clearer my path moved towards the fact that there is the Creator of the Universe. At the age of 24 I became a Christian, quitted my business, left for my first Bible school. After that there was then there was the university and the theological seminary. Since  I was 25 years old I was a minister of the church. I have been serving God for 27 years.

– How did you come to the idea of adoption?

– I never thought that I would have adopted kids but 23 years ago there was a great  problem with street kids in our city. The crowd of street kids could be found  at each corner, they were dying of drugs. Having found the church, we began to feed the kids.   We  started collecting food or money, we cooked food and brought it to the same place. Children began to make friends with us. A part of street teens came to our church and said: “We have nowhere to live, so we will live with you.” Thus the work with street children began. We have created the largest rehabilitation center in the former Soviet Union.

More than 4,000 children passed through the Republic of Pilgrim. Children of the most difficult social category, children with deep drug addiction, with criminal offenses, those who use toxic drugs and sexual problems. Later we saw that some of the children we are taking cannot be returned anywhere. Nobody wanted to take 12-13 year old dysfunctional teenagers into their family. We had no other option, besides to take them to our families. So I became the adoptive father, first for three, then for five, then for seven. At the moment, in my family we have got the 33rd adopted child within 20 years. I also have my 3 biological children. We have created a great number of  adoptive homes of family type. When we took the children off the street we did not think that we would become foster parents. We did not think that films would be made about our work, including the Hollywood documentary “Almost Holy” directed by Terrence Malik, which he made before the war.

– How do you find time for such a number of kids?

– Presently 8 sons live with me. The most number of kids that ever lived with me is 17 kids on 47sq. meters. It was insane but since those were difficult teenagers social service were happy to allow us to take the kids regardless of the conditions. They were happy somebody wanted to take such difficult teenagers. Almost all of my adopted kids are street kids. Some of the lived on street from the age of 2,5, some from 4. Some from 5years old. My 31st adopted child was a street kids since he was 2 years and a half and he couldn’t even pronounce his own name. Yes, I don’t have enough time for them. I have so much work to do. I don’t keep to very strict time management but as any father  I try my best to find time for my kids. We have been travelling actively for many years now. Alongside with my sons we rode around the Globe on bicycles.

We conquered six world peaks: the peak of Elbrus, Kilimanjaro, Ararat, the most dangerous American volcano Rainier. This summer we made an expedition and conquered the peak of Western Europe – Mont Blanc. We have been doing all this within our projects with the call for adoption. We motivate people to adopt children.

– How can a child be disciplined for misconduct?

– Punishment is part of any pedagogy. Father’s duty is to demand discipline. I guess I’ve become quite old, my youngest son is growing, and I have never used the physical punishment for 12 years. It is enough for them to see my pouting cheeks, frowning eyebrows and to hear my increased tone. It helps me that there are older sons who drive the younger ones. Older brothers have a certain authority among younger ones, this helps to manage pedagogical strategies. The question of whether  it is possible to use physical punishment on a child is very difficult, because we live in  so called “belt culture”. An Asian strict tradition reigns in the post-Soviet space: any offense of any kind lead to physical punishment. I have a negative attitude towards such pedagogy. If in the West they go too far – no punishment for kids at all, we have another extreme.. Some sort of physical punishment is possible, but in a very radical situation, when other methods do not work, when the child flies off the coils.

– In what cases can a priest kill a person?

– A priest is a man. If I see that someone is killing another man I must stop him. It is great if it’s enough to say: “Hey, man, don’t do this”. If the only way to stop the killer is to shoot, you have to shoot. Evil must be stopped,  the Scripture tells us so. The Bible is not a pacifism textbook. The idea that Christians should smile in the face of murderers and watch notorious raper” Chikatilo” taking advantage of kids is a false idea. We received this idea  from Communists. The Bible absolutely does not prohibit killing. Hebrew has two words for a killer. One word defines a killer who went to rob, to rape and to kill. And the person who stops him is not a killer, but a defender.

– Before the election I wrote a comic post “I am running for President.” That was the irony. I have never been interested in pure politics. I am a priest. I am at the place I am called to. I was invited to politics dozens of times, I hope that I will not do it.

– How do you see the mission of a woman?

– I am sure that the Lord did not confuse anything in the Garden of Eden, dividing humanity into two sexes. We are so different. This is God’s amazing design. I don’t like too much the idea a female leader. I adhere to patriarchal values. I believe that more appropriate for a woman  is to have a role of mother,  of assistant,  of home keeper than a role of a business woman. I smile when I look at feminists trying to be masculine. We have a huge shortage of men. But a woman is a wonderful divine creation. She should be behind a strong, responsible and a decent man. But in the ruined world, family is also ruined. Now  we have 60% of official divorces, and the real figure in our country is about 80%. This is a catastrophe.

What is your main mistake in life?

– Once one pastor and I came under fire. He served God in Russia for years but he was forced to leave due to the war. He told me: “I preached against fornication, drugs, selfishness, pride, but I did not reproach anyone for the love of Soviet power. This is my sin. “I have not devoted enough energy to finish off this demonic empire.” My biggest mistake, I believe, is that it seemed to me that the Soviet imperial spirit left our country during the time of Perestroika. Alas, we underestimated its demonic nature. Today we analyze it in the trenches that can be seen from my window. This is the biggest mistake.