Pastor Gennadiy repent before the Czechs 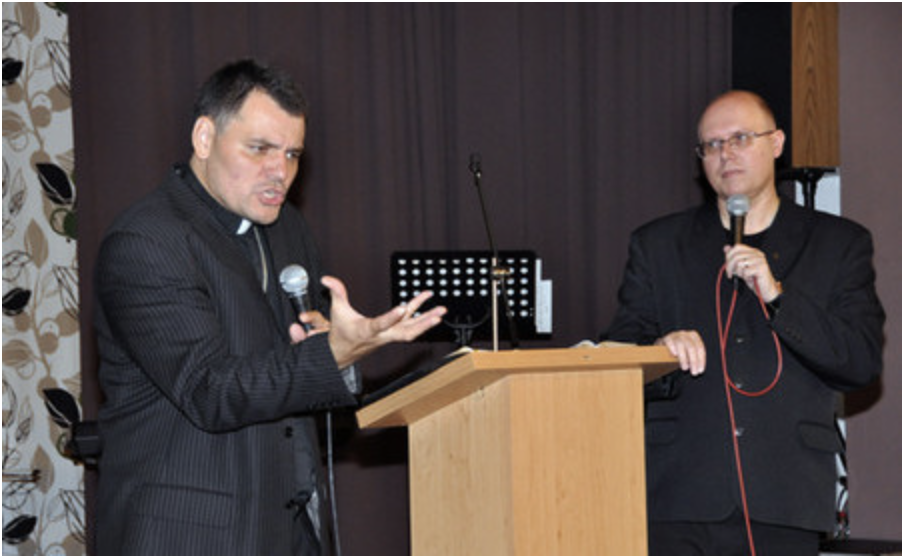 Pastor Gennadiy, together with a team of ministers, from Fund "Pilgrim" went in the middle of October on a missionary trip to Western Europe. The first stop was in the Czech Republic, city Gavizhov, where at the Apostolic Church working partner- mission "Nehemiah". Every summer the team of young people from this ministry coming to “Pilgrim” to serve to the former homeless children in Mariupol.

Pastor Gennady began his preaching by stating that as a child he hated the Czechs. It is Czech hockey players became the reason for such experience – they always won over Soviet players. After repentance before the Czechs pastor Gennady said:  today  Czech Christians are definitely a great blessing to Mariupol former street kids. The pastor brought them all the warm greetings from pilgrims. The kids always look forward for  friends come from the Czech Republic, because it’s always fun and interesting. Czech youth bring with them not only a lot of gifts, but their love, endless attention, and variety of game for children. It makes life of former street kids brighter, they have much fun with guests, and very sad when they are leaving.

In the Apostolic Church in Gavizhov pastor told the congregation about how he started working with street children in Mariupol, and about some tragic life stories and challenges had to face in the ministry to street children. Photos of adolescence with drug addictions, abandoned children, the fate of drama-filled touch Czechs, many cried and where disturbed by what they saw.

Pastor Gennady shared with the Czechs his dream – that Ukraine and other countries of the former Soviet Union, once would say that in their territories there are no more orphans.

Pastor Gennadiy: “My heart is always trembling at the word” orphan. “My dream is that every orphan has his family, that every child can say in the morning, “Good morning, Mom and Dad!”

November 6 in Ukraine will be a Day of Prayer for orphans, which aims to inspire and motivate people to adopt children who need parents. In the Czech Republic there are also a lot of orphans, and therefore he urged the Czechs to join in prayer, with confidence declaring, that even the best children’s home cannot replace a family warmth and love of parents.

Gennadiy Mokhnenko: “In our church many families has already adopted orphans. We believe in the power of prayer, in that every little child must have a family. “

Together with the Czech Christians pastor prayed for Ukraine, Russia, the Czech Republic without orphans. The sermon topic was about the power of the Gospel. Pastor believes that gospel is the strongest thing on earth, the only one that can change lives and destinies of people.

The next day in Prague, Gennady Mokhnenko met with Russian Christians, who live in the Czech Republic. In various European countries these who are watching programs “Dva Portfelya” and “Another Perspective,” in which Gennady Mokhnenko and Sergei Demidovich raise attention to troubling social issues. Czech Christians had the opportunity to directly ask the pastor questions, to which he replied with his characteristic sense of humor.

Also, Pastor Gennady shared some great plans that charity “Pilgrim” plan to do in the near future.