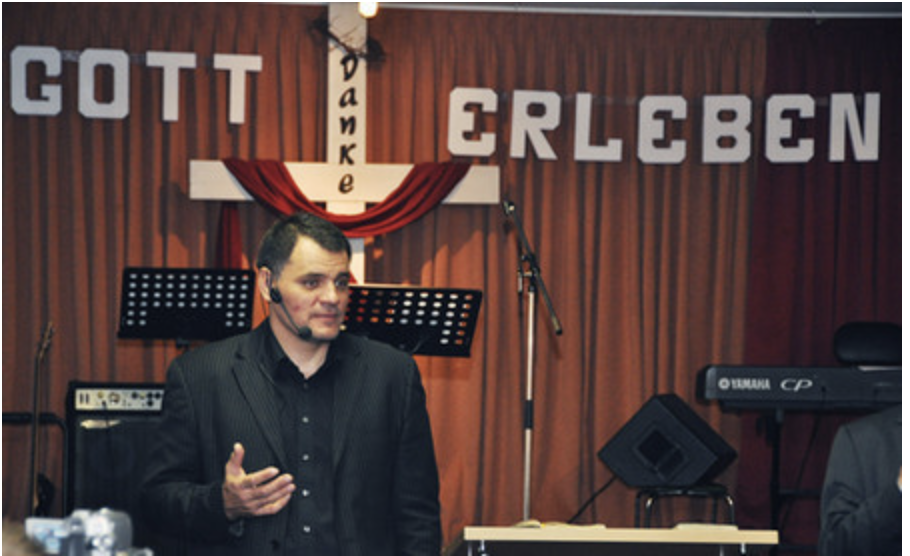 Pastor Gennadiy had an extensive program of ministries in Germany. In a short period of time he and his team of ministers visited several cities, where he participated in conferences, youth ministries, spoke with Russian Christians living in Germany.

The first service was held in Munich. The pastor of the local Russian Church, Konstantin Kiryakov decided to do the service in an interview form. One of the first questions was directly about pastor Gennady: people, events, meetings, which have affected him and his future life, who he came the Lord, and others. The pastor shared with the audience’s feelings and experiences that ultimately boiled down to one theme – the service to street children, orphans, and drug addicts. He talked a lot about the work of the rehabilitation center “Republic Pilgrim”, shared plans and dreams, and encouraged people to serve God.   Pastor Gennady told them that you do not need to be someone special to be a reason for a change someone’s life. You just need to follow God, hear Him, and serve Him and others.The very next day Gennady went to a rehabilitation center for drug addicts, “Living in Victory” at the German city of Augsburg, which helps young men to be free from drug dependency. There pastor met with the head of a rehab center, Vasili Velikodniy. Also pastor described the work of 39 rehab centers for drug addicts that were opened through charity fund “Pilgrim”, and expressed interest in the details of everyday life and rehabilitation centers in Germany. He was also able to do some sermon for current rehabilitants.  Pastor Gennadiy noted that even under the most severe and tragic situations in their lives, hardly anyone of them have experienced that at one time many former street kids have experienced. Young people at the rehab themselves, looking at pictures of former street kids drug abusers, were shocked by what they saw. Pastor Gennady insisted in his wishes for them so they do not depart from God, and confidently stood with Him o, and do not be tempted to forget their past forever.The same evening, the pastor- Pilgrim continued this theme already in Augsburg, where he held a service for the local community church, “Zion,” the pastor Ewald Fischer.Gennady Mokhnenko also was able to meet with German friends of the partner church «Christlichen Zentrum life». It is the pastor of this church, Michael Knospe, and his father, Dieter, and their churches, now for 16 years are among the closest friends and partners. This year, in the summer, a delegation from the church visited Mariupol. Young people from Germany were serving to former street children for a week in the “Republic Pilgrim “. Gennadiy Mokhnenko was able to attend the youth ministry of the church «New Generation», were he brought greetings from the pilgrims, with whom many youth became friends during the summer, told the news, and presented a new project called “World without orphans who will begin in the spring of 2012.  Pastor Gennady also met  with old friends from the mission «Samariter Dienst», which for many years helped with food and clothing  “Pilgrim Republic,” in the first years of ministry it was necessary to survive. German friends were very glad to see pastor, his family, happy to hear funny stories, some tragic moments in the lives of the Pilgrims, and remember the past.But no matter how good it was with old friends you still have to go ahead. After a long drive farther to the North of Germany, for the next two days Gennady Mokhnenko was able to serve in the church “Emmanuel” in Kloppenburg.  This church is very active in helping in the ministry of charity “Pilgrim.” Now church is working to collect once again a humanitarian help. People bring clothes, shoes, food for the children of the “Republic Pilgrim”, and rehabilitation centers. Among the three main preaching pastor Gennady conducted and evangelistic ministry where people first time heard a Good news. Pastor Gennadiy talked a lot about the recipes of happiness, which Jesus Christ gave to people in His Sermon. Happiness comes to those who are truly in need of God. Jesus says that if you want to live a happy life, you need to go in the direction of pain, suffering, tears, and bring people to God. There is no greater joy than to see someone’s life changed for better. On the same theme Gennady Mokhnenko preached at a conference in Gurlahe, Bavaria, where people from several Russian-speaking communities have gathered to listen to the pastor- Pilgrim from Mariupol. There pastor Gennady promised the audience that will be calling in the night and asking them, what two recipes happiness gave Christ. This is how Gennady Mokhnenko inspires Christians to more actively serve God and people.The final communication on the trip took place in one of the most beautiful cities in Germany – Wurzburg. In a small community, at round table, the pastor answered numerous questions from people who were  able to communicate with him only on the Internet.  Pastor told them about himself, ministry, and spoke about the upcoming world tour, in which he will go along with the “Republic Pilgrim” kids and his adoptive sons in the spring of next year.In all the cities visited by  pastor Gennadiy, he talked about the purpose of this future unprecedented action. He was confident that will be world’s first former street kids bikes tour around the globe. The main objective of the upcoming world bike tour  – promote the adoption, to create family-type homes, and to inspire people to take children from orphanages, in order to give them the necessary love and care that cannot be found anywhere only in the family.