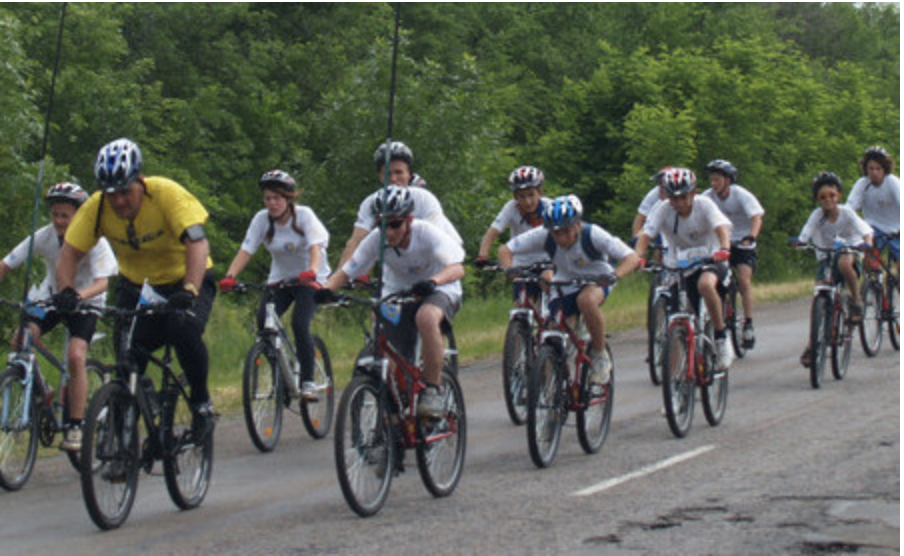 On 11th of June unprecedented bike trip around Ukraine started in Mariupol, it will bring in each city the main call – “Ukraine must be without orphans”. Adopted kids and their adoptive parents started a trip of a few thousand miles to tell people: let us open our homes and hearts to orphans who need parents.

The organizers of the bike trip is the Alliance “Ukraine without orphans” with participation of the charity fund “Pilgrim” and “Future to the children of Ukraine”.

The group of bikers ahead with the ideal inspirer of the action “Ukraine without orphans” Gennadiy Mokhnenko has gathered at the main square of the city by the Theatre of Drama to solemnly announce the start of the bike trip around Ukraine. They have left behind a month of trainings and preparations to this hard trip. They have ahead such cities as Zaporozhe, Dnepropetrovsk, Kremenchug, Cherkassy and the capital of Ukraine where the final events of the march.

Pastor Gennadiy thanks all those people who responded to the call to take part in the action and did everything for it to happen: “ We are grateful to the people who gave us opportunity to buy bikes and food, to those who pray for us and dream the same dream. We dream for the last boarding orphanage in Ukraine to be shut down in Ukraine and for there was not a single kid without parents. Once we put a target – to have no street kids in Mariupol. And it came to pass. Now we are moving forward to another purpose and I am certain that it can be fulfilled if we all want it and do our best”.

The children, former street kids, orphans and now adopted children alongside with their adoptive parents had much of enthusiasm this day and were happy to take part in the bike trip. They realize as nobody else that real family is a great happiness that can’t be given in any orphanage.

The action was supported by the Department of State of Adoption and Protection of rights of children as well as local authorities on city, county and national level. On behalf of the mayor of Mariupol his assistant, vice Mayor Tatyana Lomakina wished the pilgrim a good journey: “You have got a noble purpose – to make Ukraine a country without orphans. We hope the state powers will hear your call and will do everything they can for each child to be able to have their own family.

Just before the start itself the jazz band from the foster home “Eagle’s nest”, where adoptive parents raise 13 children and teens, performed before the partakers of the action.

After the prayer for the smooth way the entire group escorted by traffic police hit the road.

he first kilometers were quite tough: the bikers were met by rain and hail. However nobody groaned – the feeling of participation in the grandiose project gave them strength and confidence that the dream will ultimately come true. The pilgrims who got used to wandering around rode about 90 kilometers and stayed for sleepover in Zaporozhe area on setting up the tent camp there. They had a nice dinner and fast sleep. In the morning everybody got on their bikes to carry on the trip.

At the same time from Western Ukraine the other team of children has started. They will meet in Kiev on 24th of June. They are going to give official letters to the President, the Cabinet, the Parliament of Ukraine. After the final press conference the action will be over with the solemn concert and the prayer for orphaned children and those people who might make a decision to become adoptive parents. In June 26th at 2pm on Kreshatyk in Kiev there will be a special concert dedicated to the action.