Pilgrims traveled through Russia for the “World without orphans” 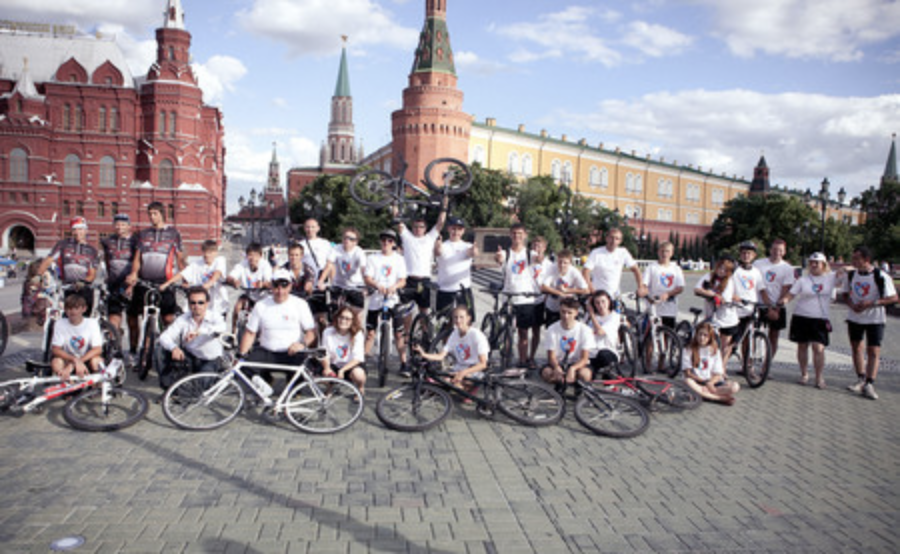 The second stage of bike tour around the world “A world without orphans" was launched June 5 directly from the main street of Ukraine – Kreschatik. In spite of the storm warning, heavy rain and thunderstorms, the participants went bike ride along the route, which ran through several regions of Ukraine (Kiev, Chernigov, Sumy) on their way to Russia. About 30 cyclists rode a total of more than two thousand miles in 25 days, passing major cities such as Kiev, Priluki, Romny, Kursk, Orel, Tula, Moscow, Vladimir, Nizhny Novgorod, Arzamas, Saransk.

The organizers of biking tour were Mariupol’s Charity Fund “Pilgrim,” alliance “Ukraine without orphans,” the alliance “Russia without orphans.” The action is supported by the State Department for Adoption and Protection of Children’s Rights, the Presidential Administration, local state administrations and local authorities. Ukrainian-led phase of the bike tour was supported by the Ministry of Youth and Family.

At the head of the column rode the founder of the largest in the former Soviet Union rehabilitation center for children “Republic Pilgrim”, the director of the charity fund “Pilgrim”, the father of 31 adopted children, pastor Gennadiy Mokhnenko. Together with the children and adult participants he carried the main slogan of bike tour; “The world must be without orphans!” Initiator and organizer of the bike tour Gennady Mokhnenko sure that Ukraine and Russia can really  become countries without the orphanages and boarding schools, that every child, waking up in the morning will be able to say: “Good morning, Mom and Dad.” That is why with this action former street kids, their parents, and people who care about the problems of orphans, Ukrainians and Russians denounced the idea of a real possibility and necessity of the adoption.

Gennadiy Mokhnenko : “I am very pleased that former Mariupol street children that for 5-6 years  wandered on the streets  living in basements, today in their 13-16 years, sit on bikes and pedal around the world with different dreams: a world without orphans. We want to bring people to the idea that is time to overcome any fears and take children in the families. Boarding schools have to go back in time. “

Biking along the way, in every town and village, the participants were welcomed with bread and salt, press conferences were organized, concerts, and communication with local authorities, community organizations, and Christian churches. In all major cities of Ukraine and Russia churches have been establishing committees, which are designed to assist and regulate adoption.

Gennadiy Mokhnenko: “Thanks to the public and media, the wave will come and it’s already underway. The resonance of our own, we can say crazy idea has already begun. We dream and hope that together we can raise the culture of adoption, and each orphan in Ukraine and Russia will find its family. “

In Kursk and Nizhny Novgorod participants had conferences on the problems of orphans and adoption. They also participated actively in the head of the Alliance “Russia without orphans” Ivan Iklyushin and founder of “You will be found” in Ukraine Sergey Demidovich. The conferences were heard not only calls for the adoption but bright examples of changed lives of children. Participants discussed many practical issues, and had specific mini forums within the conference.

In the capital of Russia – Moscow – cyclists were also able to actively promote the idea and dream of a world without orphans. An important meeting was held in the Public Chamber of Russian Federation. One of its representatives, who spoke with participants biking, promised that he will give appeal and request for assistance in the eradication of child abandonment to Russian President Vladimir Putin. He also will tell the President about the idea of bike tour “World without orphans”, and its purpose.

Also in Moscow, kids and adults were able to visit the legendary Red Square, walk along the Rabat Street, around the famous Soviet Era. The next day bikers brought flowers to the Poklonnaya Hill in memory of fallen solders in World War II.

Gennadiy Mokhnenko, the initiator of the round the world cycling action “A world without orphans,” the pastor, and adoptive father of 31 children: “I see this kind of symbolism, thousands of great-grandchildren of heroes who died in the war – now in orphanages. Could the defenders of the Fatherland to think that soon the country will be covered by a network of orphanages? Could they imagine that a great country, winning in a terrible war will not be able to cope with the problem of child abandonment? I’m sure it’s within our reach. “

On their way they were joined by cyclists, local bikers, and the people who thus support the idea of”world without orphans.” Someone drove from town to town, someone came to the parking areas – people have expressed their solidarity and actively participated in various promotions.Even the today, the organizers of the project “A world without orphans” sum up, the next scheduled route and date of the third stage will yet to come.