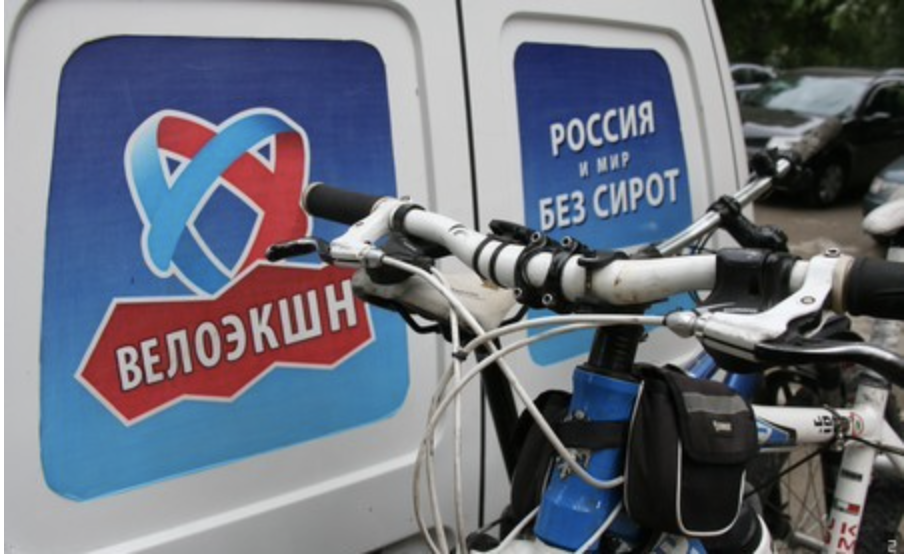 The bike action “Russia without orphans” has reached Omsk, they had started last year in Ukraine. The leaders of the bike trip intend to make a worldwide trip on their bikes with the goal to call upon people to adopt. In Omsk the bikers plan to relax in the water –park and to give a special gift to the mayor Dvorakovsky .

The first stop in Omsk the bikers made in the orphanage No 10. The first speaker is Gennadiy Mokhnenko, the founder of the children’s rehab center ‘Republic Pilgrim” and the adoptive father of 32 kids.

— I would love to thank for such hospitality. 12 miles before Omsk we were met by locals with some food, we had sandwiches and chicken drums then when we entered the city we were given food again and then the third meal. I assume it is the first time we have such a reception.

The partakers of the bike trip will stay in Omsk till July 2nd. On Sunday the guy will be taken to the water park. Early morning the very next day they will have to start their ride again towards Novosibirsk. This year the bike trip will reach The Baikal and next year the guys will conquer the Far East.

In this bike trip the teenagers, adopted sons of Gennadiy take part. All of them are orphans who grew up on streets and in the sewers.

— My adopted kids are all former street kids who used to live on streets since the age of 5, 6, 8 or even 2 and a half years old. They were drug users, criminals etc. But what becomes obvious to us is that in the family they change and because of it we go around the Earth.

Next to Gennadiy Eugen Isayev is sitting who received a national reward ‘Pride of Ukraine” He was the first in his country who adopted an HIV+ child. He and his wife raise 11 kids now and 7 of them are HIV+. Some of his adopted sons take part in the bike action too.

The boys are not scared of long distances at all, they used to be in extreme conditions before beside the action.

— We used to do many weird things trying to tell people about the importance of the adoption, – Gennadiy Mokhnenko admits. We conquered the Elbrus with my sons, we climbed the Ararat Mount, we used to cross wilderness and serious canyons. We are skilled travelers.

Gennadiy is assured that due to the bike action which attracts the attention of mass media and local bodies of different towns and cities they will be able to eradicate the problem of the orphanship in Russia and there won’t be any need in orphanages any more. But the representatives of the state structures are not so optimistic about it.

– Presently at the territory of Omsk area the number of orphans is over 10000 and 9185 of them are living in so called replacement families and 1174 children live in orphanages. I cannot say that the problem will be solved in the nearest future but the state takes some steps to solve the situation, the head of the department of control in custody and guardianship over minors of the Omsk area Olga Rozhkovskaya shared.

At the end of the meeting Gennadiy Mokhnenko asked the representatives of local state powers to hand to the mayor – Mr. Dvorakovsky, the gift from him – the DVDs and the book about quests of Gennadiy and his sons.