The third stage of the worldwide bike action “World without orphans”. From the Urals to the Baikal lake. 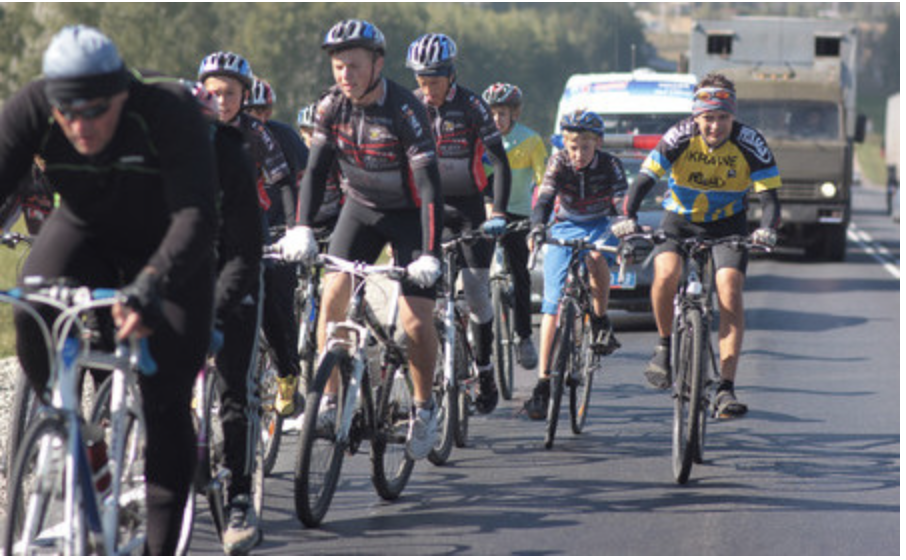 In June 18th of 2013 in Russia the third stage of the world wide bike action of the former street kids “World without orphans” has started. This stage will take place in the Russian Federation and will be of the biggest scale. Its participants are willing to ride over 3000 miles through Siberia.

25 former street kids and now adopted kids as wella s the kids from the center of children’s rehabilitation “ Republic Pilgrim” ahead with the President of the Charity Fund “Pilgrim”, an adoptive father for 32 kids Gennadiy Mokhnenko, they are going to bring the motto of the unprecedented action – world without orphans to all these places. For the sake of this purpose the participants of the action are ready to pedal and encourage couples to go to orphanages and take kids into their families.

The third stage is starting in Yekaterinburg – they finished their second stage here last year. And furthermore the route will go through such big cities as Tyumen – Omsk – Novosibirsk – Krasnoyarsk – Irkutsk – Baikalsk ( The Baikal Lake)

The trip will take about 2 months this time. The guys are going to overcome about 75 miles per day. The stage will be over in August 5th 2013, and after that its participants will get back to Ukraine.

Gennadiy Mokhnenko, the president of the charity fund “Pilgrim”: ‘I am so pleased to see that those who used to be street kids in Mariupol, those who were living on streets, in the basements and sewers from the age of 5 -6, and now when they are about 13-16 years old, they sit on their bikes and pedal all around the world with this excellent dream: world without orphans. We want to reach out to people with this idea that it is worth to overcome all fears and to adopt children into families. Orphanages must become things of the past”.

Gennadiy Mokhnenko – pastor, president of the charity fund “Pilgrim”, adoptive father of 32 adopted kids – has become an initiator and inspirer and an organizer of the worldwide bike action “World without orphans”. He is convinced from stage to stage of the bike action that this project which started just on pure enthusiasm will become successful and will achieve its goal. The response is obvious already. So many people, Christians and social organizations join the action. It was also actively supported by the Alliance “Ukraine without orphans” and “ Russia without orphans”. The world wide bike action has been held also with the support of the state department of adoption and defense of rights of children, Administration of the President of the Russian Federation, local bodies of power and self government.

The goals of the bike action all around the world “World without orphans” are:

– to inspire people to raise kids in families

– to create informational occasions on the subject of eradication of orphanship in the world,

– to destroy negative myths about adoption.

To achieve these goals the participants of the action are going in various ways. In each town and city on their route they are going to hold big conferences speaking about the problems of orphans and adoption. At such conferences they talk about good examples of change of life stories of orphans and call unto people to adopt, they also give some practical advices on holding different micro conferences inside of the big one. Many Christian churches of Russia have become active in the process of the worldwide bike action “World without orphans”. The bikers also meet priests of those cities beside mass meetings with people. According to the initiator of the action Gennadiy Mokhnenko it is a very good way to impact the idea of adoption – through hearts of the church leaders. When taking in the idea of adoption of those kids who are deprived of parental care the priests will be able to reach the idea to their attendees.

Gennadiy Mokhenko, pastor, president of the Charity Fund “Pilgrim”: “We believe that Ukraine and Russia must be the countries without orphans and orphanages”. This must be left in the past. And we believe it is a possible task for our society. We have like 1000 adult working people per 1 orphan in our countries so don’t tell me that we cannot find a good family for each orphan”.

In each city where the bike trip had been already passing by the special committees were created in churches there that will help those who are willing to adopt – they will get there help in judicial, psychological questions that have something to do with the adoption. Gennadiy Mokhnenko is convinced that the expertise of the charity fund “Pilgrim” can positively impact others. And it gives a chance to orphans to be adopted. The head of the Alliance of initiatives “Russia without orphans”, the chairman of the organizational committee of the bike trip Ivan Iklyushin said that they got some statistics after the previous stages of the bike action – on the average 2-40 families after each stage come up with the decision to adopt a child.

In 2014 the organizers of the worldwide bike action plan to finish Russian route of the trip – they will reach the Far East (Vladivostok) and then in the years to come they will ride their bikes all through Alaska, Canada and the US. And the next stage is in the US from LA to New York. The last stage will be Europe: Portugal, Spain, France, Germany, Czech Republic and Ukraine.

In 2017 they plan to complete the world wide bike action “World without orphans” on finishing in Mariupol where they had initially started.