The election took place; the new president takes the office 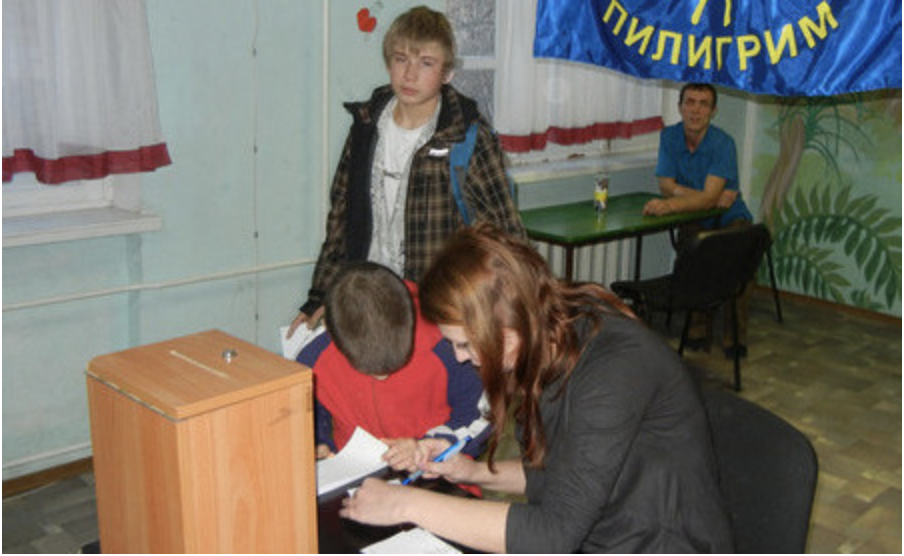 Recently, in the "Republic Pilgrim" took place the election of a new government. The race was quite tense. A few new guys have declared themselves as strong candidates and presidential elections were difficult.

From the previous government withdrew some of the guys: someone graduated from high school, successfully completed rehabilitation and returned to his family, some, unfortunately, because of escapes and other violations of the laws of the Republic can no longer be in leadership positions. As a matter of urgency have been assigned a new special election.

In its programs, each candidate was hoping for a positive change in the Republic of Pilgrim. A lot of guys offered to non-standard approaches in the management of the Republic, have expressed a lot of fresh ideas. Here are some of them:

Gunko Edward, candidate member of the government:
“I live in a Pilgrim for over 6 months, 2 months, of which I was in government. You know, I would like to change our lives for the better; I will try to negotiate with the administration of any of our clubs, to computer technology, competition racing, in printing, in the knowledge of programming. I will hold extra lessons in computer programming. I will negotiate with the leaders of worship and administration provides sound system so we can have weekends disco. I think we need more entertainment, and they will be. We’ll go for a walk in the park, on site, special prayer walks” Guided by God”. I cannot promise all this, but I’ll try to do and agree with the administration. Maybe I will not be president, it seems to me that I cannot edit the whole Republic, but I’m sure I can be useful in the government. I’ll try not to let all of you down! I wish you all the best, dear pilgrims!”

KRECHUN Nicholas, a candidate member of the government:
“I Krechun Nicholas, born in 2000, a citizen of the “Republic Pilgrim”.
My campaign platform: I want to run for president of the Republic. I want to change the spiritual state of the Republic, to raise the boys’ self-esteem. I believe we must change the role of the Government of the Republic, to raise the authority of ministers and the president, ministers to toughen penalties for grave sins (smoking, inappropriate language), I would like to have more activities that the Republic has always seethed with life and never get bored.”

Participated in the election all the students, children from homes of family type, all employees of ICF “Pilgrim” and the Church of Good Changes, because of that the votes were many. In summing up the Counting Commission is impartial, every vote was counted. On the sidelines were heated discussions, each trying to defend his favorite. For the counting commission, headed by the director of the Center Karpukhina Tatiana was a surprise result of the vote count – an unprecedented event in the history of the Republic – 80% of the votes were cast for another candidate very young Nicholas Krechun.

Nick lives in the center for 2 years along with his brothers and sister. Their parents were in the difficult situation in life: her father is in prison, my mother – a citizen of a neighboring country from the Ukraine, she has no documents, and it was almost deported from the country, she is now engaged in restoring the necessary documents.
During the time that Nick lives in the Republic of the Pilgrim, he gained the respect of almost all the boys to their cheerful and open nature, kindness, sympathy, desire for justice. Nick has always actively participated in festivals and events center, he is very talented and artistic, sings very well. He has never been in the government of the Republic, but has leadership experience; he was the eldest in the room, the detachment commander. In the elections for president, residents of Pilgrim he had great confidence, despite his very young age and lack of experience. They believe that Kohl will cope with the duties of president of Pilgrim. In addition, the results of the election Nicholas selected a great team: a few guys from the last convocation of the Government –  Zenich Sasha, who became prime minister of Pilgrim, Olga Zenich, Lida Tolmachev, Andrey Krechun and the other guys – they are always ready to support the president in a difficult period of its formation.

Tatiana Karpukhina, director of the CBD “Republic Pilgrim”: “All of us, students and staff of the Center, wish Nicholas good luck! We believe that this new wave in the government will strengthen the Center of former street children!