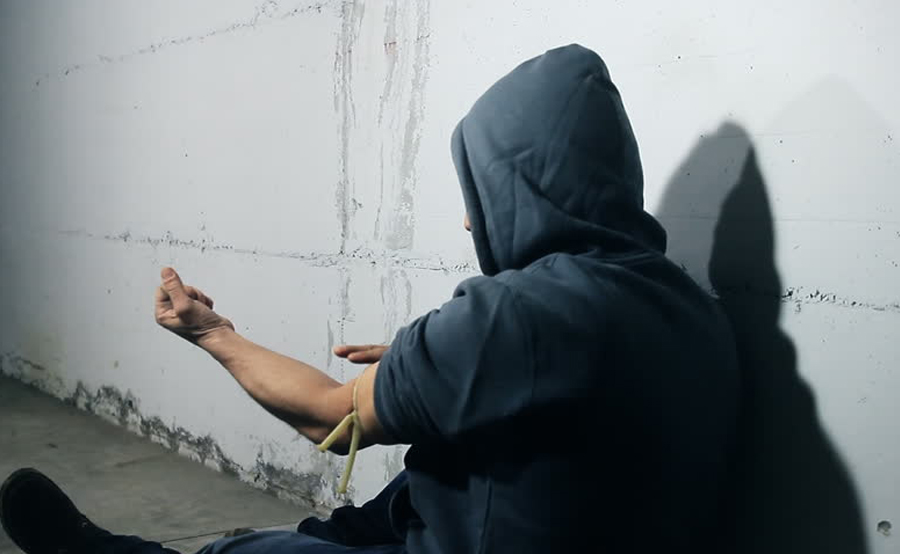 The issue of drug addiction hasn’t disappeared from the streets of Mariupol. Just like it was in 90-s the category of people who smoke different substances, use injective drugs or other substances provoking addiction is still present today. This dark side of life is known only to very narrow category of specialist such as doctors, policemen, pastors of churches and relatives of addicted people.

We interview today a man from Mariupol. His name is Sergey. He is 38 and he was caught in the loop of addiction twice. Due to recognition of his mistakes and due to the fact he came to faith in God he managed to get back to healthy life. He’s been living soberly for 6 years now. The man truly hopes that his story will help many young people to avoid acquaintance with stupefying substances and not to become addicts.

Tell about your childhood.

I was raised in Mariupol. I never left the place. My parents are working people. My dad is an ambulance driver, and my Mom is a warehouse manager. I spent on streets with other guys most of my time. My parents were always at work so I was at my own disposal. My sister is 6 years older and her friends offered me to try drugs for the first time. I agreed. We smoked pot. I was about 12. It wasn’t normal. My parents had no idea and even elder guys told me off for that.  But I quickly learnt how to grow it at our summer house. I sowed it at the garden of our neighbor.

What happened after that?

Then I started selling pot. I sold it to youngsters on streets. I was about 16. And then I tried an injective drug for the first time. In a year I already sold drugs full time, supported by the police. I can speak about it now; those people don’t work in police any more. They “caught’ me immediately and I sold with their “cover”. I was a minor and they threatened to me that they would tell my parents. The goods, I mean opium was delivered at night time. I always had it even when other dealers didn’t. I made the drug myself from a dry raw material. They (some policemen) guarded me so I could sell whenever I wanted to. But later I was arrested and put to court for that. The committee from Kiev came to Mariupol and they discredited the scheme of the local policemen.

Since I was only 18, I was tried but given a 2- year -suspended sentence.

Is it when your way to rethinking of life started?

This is when I went to church. It was when my friend, who was also a drug addict, committed a suicide – jumped from the roof. He couldn’t cope anymore and decided that there is no sense to live. I went to the rehab center to Gennadiy Mokhnenko. I said to myself: “I am not going to lie to God but if I tell everything at the court they will imprison me for half a life”. I never saw those policemen who used to cover my drug business.

What was your life like when you used injective drugs?

It was all good in the beginning, and in a year I realize I can’t give it up myself. I decided there is no use to take care of myself and when I am 30 I will be an old man. I saw a 30-year-old drug addict – he looked terrible. I dreamed to live at least till 30, and my parents rejected me. My father literally told me:“My son had died when he first tried drugs”. They cried a lot, they tried to find treatment for me in different clinics. Nothing helped.

Did you sell drug for the sake of gaining money?

No, just fin order to survive. And also the police made me otherwise they would put me to prison. I needed money only to buy drugs, I didn’t have any other ideas or goals.

What helped you to quit using drugs?

What was your time in the rehab center like?

First of all they taught me to work there, to live in community and to speak to people in a different way. It is a vital part of our life. I couldn’t work, didn’t do anything with my hands and if I held a tool in my hand it was only in order to sell it. In the rehab they told us about purposes in life, about value of family and procreation. I knew about it but never related it to myself. They we opened a lot of such centers all of Ukraine. I took an active part in it since I realized that there are many young men and women who lost their way as I did once, and they need help for them to get back to normal life.

I met really nice people who realized that it is possible to work and not to steal, to simply live and enjoy life, be glad that you have family. They taught me to study in the rehab. The first books that I read (by Dostoyevsky etc.) were in the rehab center.

Were they the centers for adults?

At first they were for adults but then Gennadiy and I saw in the sewers a lot of addicted kids, they were much younger than me. I took charge of the group of 11 kids (9 boys and 2 girls). We began to intensively rehabilitate them in “Pilgrim”. I lived with them for 2 years. I taught them by my own example. I would stand beside and taught them to play soccer, chess, taught not to steal but to help people; I read books with them and not just chapter by chapter but we tried to discuss the meaning, to find out the idea of the author.

We also had winter and summer trips, we had an active fellowship with parents of addicts on rehab.

It depends. Some kids choose to keep on using drugs and to die in drugs. The rehabilitation is to give people a choice but it is up to them to make it or not. There is a different life, if you want you can have it, if not – good bye.

Have you got your own family now?

Yes, I married a woman who had never anything to do with drugs. We have 2 kids. One is the girl and she is not my biological child. She is 21 now. And we also have our boy who was born healthy. And it is despite of my former life conduct. I am not HIV+ but 99% of my friends are. I used to have hepatitis C but after treatment I am well.

You mentioned that you became addicted again, didn’t you?

Yes, second time it was substances which contain codeine. I thought it was not a big deal. I first tired it because I had a headache. I took three pills and felt the difference so I took three pills at a time and so gradually got addicted and realized I couldn’t give it up. The addiction was even worse that after opium. When you use opium you realize what awaits you but here your body organs just fail you, horrible detoxification and it presses on you psychologically.

I went to the rehab center in Russia, in Krasnodarsky Krai. It was the rehab we built ourselves. I was there 6 months. It was 6 years ago.

Where did you buy those substances?

I bought it in 2 pharmacies without any prescription in 17th and in the 23rd micro region of the city. It is available any time.  I saw the scale of the problem and was surprised by the age of those who use it. They are about 16-17. The lines are very long there. The drug addiction is getting younger and the pills, from my own experience, are not the light drugs, it is very hard to quit.

How did you manage to do that?

I realized my mistake. I managed to overcome the physical addiction within one month and then I learnt to fight against it in my head. The drug addiction in Russian is narcomania. It has two sides. Narco  is the physical addiction, and mania  is the psychological one. It draws you, beckons you, you want to feel the high again. But you can always direct your thoughts into your work or other spheres of life. I know lots of people who overcame it.

Are you afraid of being caught by addiction again?

Surely I need to be aware of it all the time. I realized the mistake I made second time. The pharmacy without any prescription gave me the pills which quickly make you addicted on them. It is a deception. When I read the ingredients I realized why I was having the physical addiction.

Are there former addicts?

They are not former, they are people who decided to live a normal life. I know hundreds of people who overcame the addiction. Some of them are now pastors of churches, teachers in schools, policemen and even in the team of the city mayor in Alexandria.

What advice can you give to young people for them not to become addicts?

As for one’s choice one should never even try.  When I began to use drugs I thought I was in control and I was sure I can always quit. I was surprised when in a few months I realized that I couldn’t. It is foolish to think “We need to try it all in this life”. That’s not true. You shouldn’t try everything.

For those who have already started using drugs I want to say that the longer you use drugs the harder it will be to quit and the harder to find a new sense in life. You did so much evil and you want to forget about it and drugs help us to forget about everything. I was a thief and then I was tormented by my conscience but my desire to use drugs was stronger. If you already use drugs you should make sure you tell your parents about it. I used to think that if someone told my parents about me they were traitors but now I wish my parents got to know about it earlier. It is necessary to change your circle of fellowship to the good one. A drug addict isolates himself and talk to his company only. Psychologists expose the problem and priests help to be delivered.

Is there a way out of drug addiction?

There is. No doubt. I know some people who used injective drugs systematically for 25 years but they managed to get delivered, they have good family and kids now. There is a way out. And it is necessary to seek for it.

What must be done for the youth not to be attracted by drugs?

It is necessary to make conditions for youth to develop their intellect, to be fond of sports, reading books , for youth to seek the sense of life studying religions because the search for God is inside each and every person.