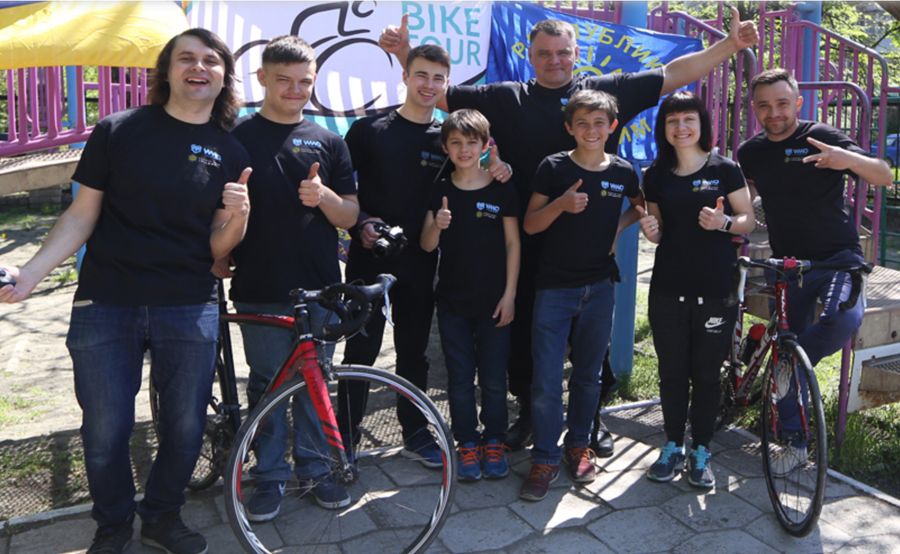 Former orphans and kids  from children's rehabilitation center «Republic Pilgrim» are preparing to finish a round-the-world bike tour called «World Without Orphans» and on the first days of May this year they will go to North America. Starting from Los Angeles, California and ending in Miami, Florida state, they will overcome few thousands kilometres on their bikes, proclaiming their wildest dream, telling people about the value of the family for every single child in this world. Participants of this tour hope to prove the society that a Global Orphans Crisis – is just a myth that can be overcome by providing support for adoptive families, promoting adopting orphans or directly taking children to their families.

Andrey Dudin, first president of “Republic Pilgrim”, Gennadiy Mokhnenko’s adopted son, a musician: “Once I was adopted and I could’ve become an individual and have my own family, a child, dreams and purposes. And now I ride my bike to prove with my own story that adopted children are good too, they do not differ from children who do have parents, they need families too. This is the reason why I – not a professional sportsman – will do whatever is needed to get to the finish line, to overcome myself and to tell people about orphans. We will do this and you will be proud of us. On the first day – 116 km and almost all the time up the hill, pray for us. We already can’t sleep at night, worrying about the trip a lot”.

Gennadiy Mokhnenko, bike team leader, founder of “Republic Pilgrim” in Mariupol, adoptive father of 33 kids, president of charity fund “Pilgrim”: “Next Saturday we start from Los Angeles. 50 degrees of heat, 5000 km, 10 states, Grand Canyon, mountains… I don’t know how we’ll be surviving but if we will survive, our round-the-world trip, and then we’ll be able to go through distances that weren’t included into the main route. My dream is to go from Alaska through Canada and West part of USA”.

From 2011 Gennadiy Mokhnenko and his team of former street kids since 2011, Gennady Mokhnenko and his team of former homeless children are traveling the world’s roads to dispel myths that prevent families from adopting children. Since their first trip, they have already traveled more than 22 thousand kilometers across the whole of Ukraine, Russia and Europe. As a result of a large-scale campaign, hundreds of children were able to find real families.

Gennadiy Mokhnenko: “I dream about the World Without Orphans. I think that in our lives we can end this Orphan Crisis and we hope that this round-the-world bike tour will help to materialize this dream. Every child should wake up in a family every day of their lives. And many adoptive families who we meet on our bike tour say that we have helped them to break their fear of taking a child, and often not only one, into their own families. Those who have been on our mettings, overcome this fear and adopt children. One of the participants in our team also adopted a baby into his family. And for all of this we are ready to even to creep this distance”.

Pastor Gennadiy marked that, unfortunately, many team members didn’t get VISA to USA, and because of it, team’s core is weaker than we expected, and without those, who we’ve been counting on, those who overcame all of the previous stages of the tour, who were getting mature with this tour. This will make the process of the movement of the bike line more difficult and it will become real trial for many participants. American company is fully responsible for organization of this stage, they pay for all the costs – and this is a true miracle for bike riders from Mariupol, because paying for the entire trip was impossible for them. Because of this our Sportsmen will be able to feed well and to have a good rest during the trip. A difficult trial with wilderness, mountains and heat is waiting for every participant of the trip. But our aim is clear and our team members are highly motivated.

27th of July 2018 North American stage of a bike tour will finish it’s trip around the world. A team will overcome about 5000 km through the territory of US with planned meetings in many different cities in 10 different states. As organizators from American side Serving Orphans Worldwide say, a possibility to go this distance with our team will be available for all of those who want this. There will also be organized special events on the route the team will be moving in, meetings with public people, mass media and official representatives of states, for people could know more about orphans crisis and about the way the can help with solving this problem. Route plan is on this link https://soworldwide.org/2018-bike-ride/ .

Gennadiy Mokhnenko: «we do le couthis for people could hear our calling, so the dream about adoption could spread around the world and the amount of orphans decreased and decreased. We are sure that the scale of our action will let the whole world know about it. After all, If I’ll travel from Mariupol to the neighbouring village – no one, except my family and friends will know about it, but now we are streaming this dream about the world without orphans for a huge auditorium! Join us on social media and watch as we’ll be moving, pray for us and believe that we’ll achieve everything, overcome everything and see our purpose at the end of the trip»