The medal for defense of “Pilgrim” during the war 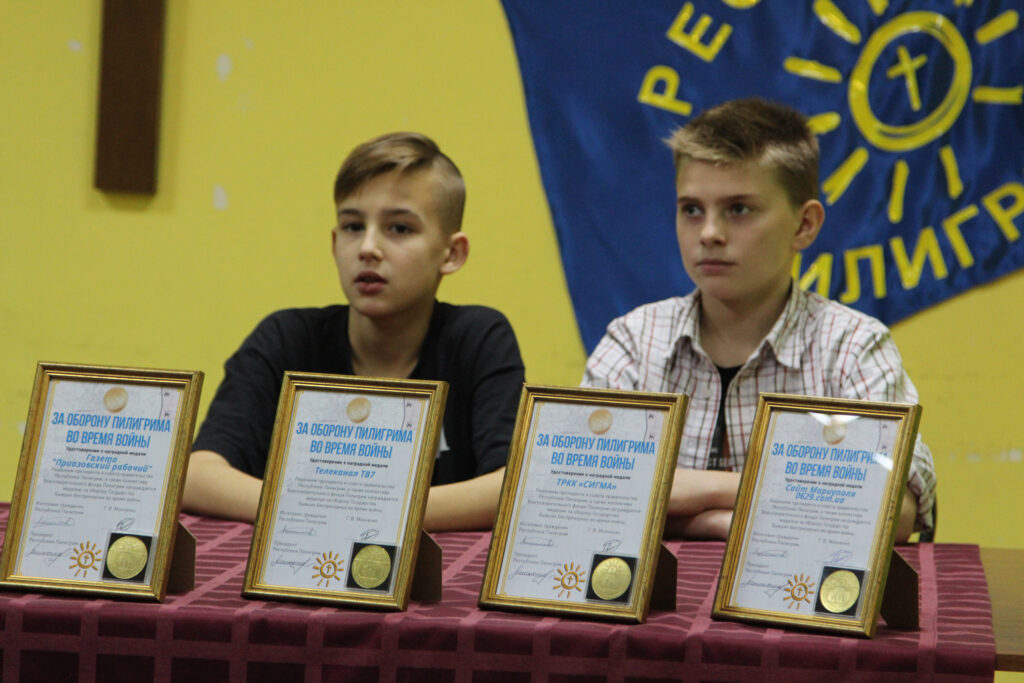 The President of the State of Former Street Kids and the Cabinet of “Republic Pilgrim” established the award “The medal for the defense of “Pilgrim” during the war”. The children who experienced evacuation from their native city twice would like to thank in such a way those people who helped them to go through this tough time.

The pilgrims make these medals on their own and hand them over to the soldiers of different divisions who defend the city as well as to the people who support the children’s rehab center in the rough times like these.

Darja, the President of the State of Former street kids: “We had a setting of the government of our republic and made a decision to thank those who supported and defended our state by establishing this kind of award. We decided to make a medal for defense of Pilgrim during the war. And many of our kids started making up the design of these medals right away and how to make it. We think it is very important”.

Denis, a student from “Republic Pilgrim”: “I figured out the way how to make those medals quickly. I can do as many of them as needed. I know it is important for those people who defend our city”.

All the time during the war activities except for the period of evacuation, the pilgrims supported soldiers and other people at the frontline zone. And now the guys want to express their gratitude to them in the form of real award for the defenders of Mariupol and for people who support the soldiers.

The first medals were handed over to the former graduates of the center of children’s rehabilitation “Republic Pilgrim” who presently defend the city as volunteers and to the team of chaplains of the Church Of Good Changes.

Albert Khomyak, the military chaplain: “Chaplain is a military priest. Our battalion consists of priests from different confessions, we are united around the common idea to help those who stand at the frontline and defend our families. It is an honor to get this medal from the kids and the responsibility of every man is to defend the children”.

The pastors during this time of war actions work in the zone of war conflict every day rendering help to soldiers and civilians. Despite of shelling and chance to get killed they come to the frontline regularly bringing necessities, food and the word of God.  They are convinced that there are no atheists at the war because the soldiers realize that only God can defend them. This is why the chaplains go to the frontline not only to improve the conditions of their service but surely as priests they pray with the soldiers and about each of them, about their families and to encourage them spiritually and emotionally.

Eugen Kovalenko, a military chaplain: «I am pleased to get this award since the children are our future. They survived the evacuation and know about the life at the frontline not by hearsay. This is why this award is especially valuable. It is also very pleasant for soldiers to get this award from the kids because it is the affirmation for them that they are here not in vain”.