The new president of the state of former street kids has become a girl, a former goth. 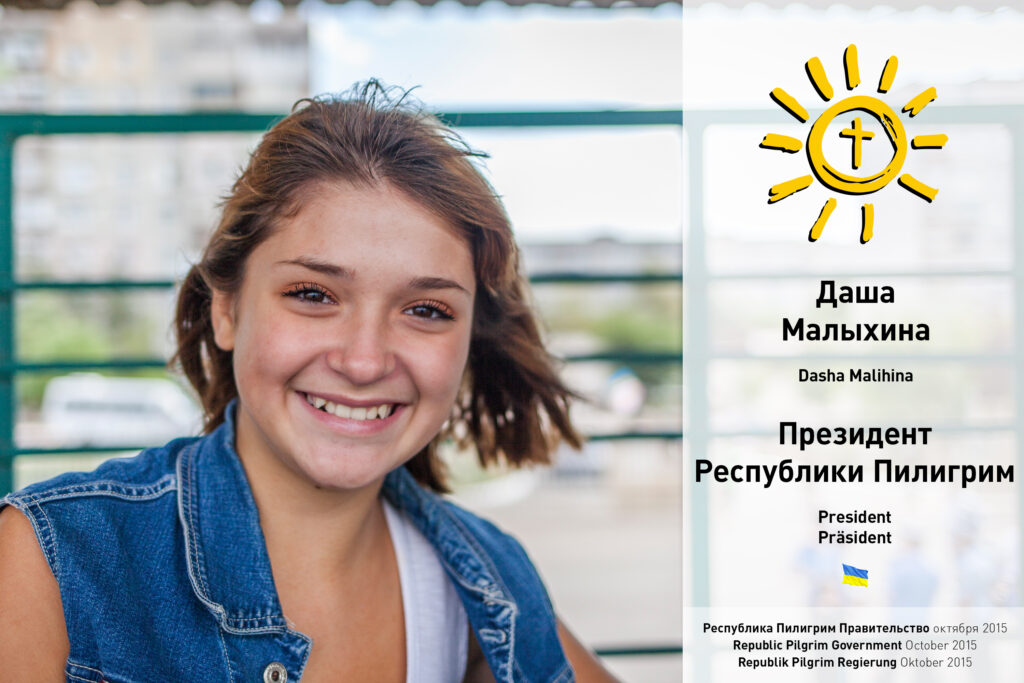 The snap elections of the President and the government took place in “Republic Pilgrim”. According to the results of secret ballot for the first time the head of the executive power of the Republic has become a girl – Darja Malykhina. The citizens of the State of Former Street Kids and all the pedagogical personnel are convinced that she will bring something new and unusual to the life of Pilgrim.

In republic Pilgrim presidents are elected for an indefinite period since the status of an adolescent can change any moment: the child can either finish his rehabilitation or can be adopted of fostered.

The elections are held in a unique system and have no analogues since the public authorities are elected not for a definite position in the government. The4 positions are taken according to the total results of the elections. So for instance the candidate who got the biggest number of votes takes the position of the President, and the one who took second place occupies the position of the Prime Minister. Thus all the active citizens of the Republic who ran for the post of president will ultimately get in the government and will occupy various state posts.

Also peculiarity of the self government in “Republic Pilgrim” is that the posts have not nominal but real character. The president and the ministers have all real rights and real power, the children change and establish laws on their own; they have trial courts, learn to take responsibility and to make decisions.

This year after elections the government was totally upgraded. These elections were special because the voters were very active in social networks, and any electioneering was allowed except for “the black PR”. Any person could vote in social network and each vote was counted and added to the results of the closed vote in the Republic Pilgrim in which all the citizens of the state of former street kids take part.

The newly elected head of the State Darja was active in the Republic even before the elections, she was a good organizer of different activities and always in the core of events this is why the fact that she occupied the post of President is totally fair.

Tatyana Karpukhina, the director of the center of children rehabilitation “ Republic Pilgrim”: “ Darja ( we also call her Dasha) is a very fair, cheerful, persistent and openhearted person. She has a good sense of humor and she is fully developed in many areas even though to see it right after she got to the center was quite difficult”.

Dasha was raised by her grandma and at one moment Dasha got to the bad company of informals – goths and dipped in this lifestyle from head to toes. Her head became full of gloomy thoughts and suicidal ideas that scared her relatives very much. No methods of upbringing worked, nothing could bring joy of life back to the girl, she was closed and would not talk to anyone. Hew grandma was in despair when she turned for help to the Republic Pilgrim. Surprisingly the girl had changed to the better quite rapidly: she cut her contact with former bad company, changed her insights and life position in general. Within 18 months Dasha has been transformed and goes on surprising with her achievements. She never ran away or violated the laws of the Republic so she is a decent pattern for other kids in Pilgrim. Darja still worries and is bit nervous about the new post but she has a great support.

Darja Malykhina, the President of “Republic Pilgrim”: “ I am drja malykhina. I used to study at school No 15 of Mariupol and I used to live with my grandmother. I have been living in “Pilgrim” since December 2013. I am in the 8th grade now, I love taking part in different events of the center, in social life of the Republic. I know very well all the laws of the Republic and I have some interesting ideas so I won’t let these people down!”

It is worth mentioning that unlike the public opinion that the promises made before elections are normally empty talks  Dasha has already started realizing hers and soon all the members of the government will have their passports.