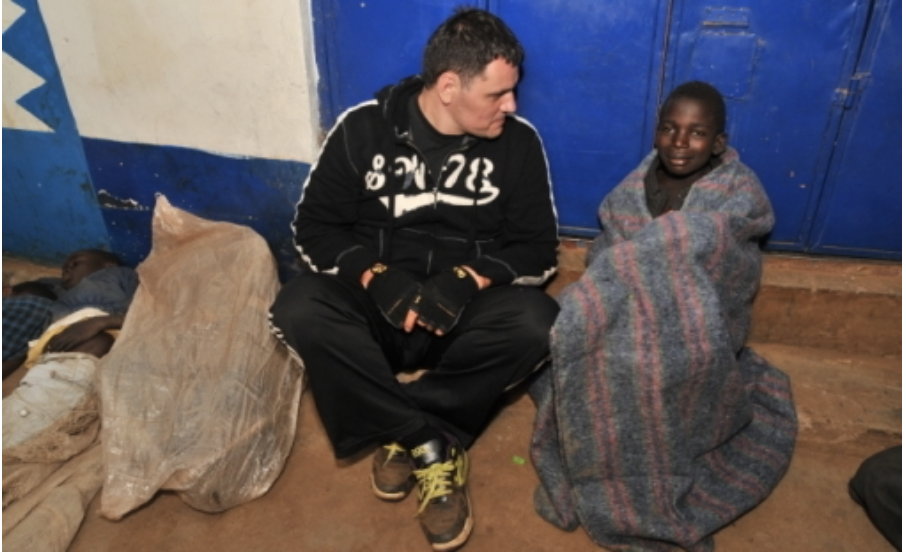 On February 4 th the international team of missionaries from Ukraine, Russia and the US initiated by Gennadiy Mokhnenko has started to Equatorial Africa for the 5 th time, they went to Kenya to work in local orphanages, to render help to black street kids and orphans. This time there are 43 people in the team, they all were doing fundraising, raised food, medications, clothes, toys etc. to support and to improve living conditions of the poorest layers of population of the Earth.

The percentage of orphans in Africa is highest in the world, in some countries it reaches the point of 20% of the total population, in other words every 5th kid doesn’t get parental love and care. Nevertheless on many countries of the continent many families are starting to open their hearts and homes to adopt orphaned kids.Пилигримыза «Африкубезсирот»

Gennadiy Mokhnenko, pastor – pilgrim, a head of the missionary trip to Kenya: “It’s my fifth trip to Africa. After my first trip there something happened in my heart and since then I go there every year organizing a team to help black street kids and orphans. We go to our partner– orphanages as well as to people on streets that are hungry and nobody needs them”.

The volunteers are planning to set up mobile ERs (there are doctors in the team) since big part of the Africans have no chance to get medical help elsewhere. Also the international team raised funds to dig wells since in those places water is equal to life. Engineersarealreadyinvitedtodothisjob. Besidethatthemissionariesrenderthehelpinconstructionofhomes, purchaseofpiecesoffurniture, sportsequipmentandfood.

In this 5th trip for the sake of their dream – world without orphans – there are 3 former street kids in the team – they grew up in the sewers of Mariupol – now they are adopted sons of Gennadiy Mokhnenko. Andrii Dudin, Slavik Smyslov and Sergey Kucheruk – alongside with their adoptive father intend not only to serve on streets of Kenyan towns. After 10 days of work at slums (the places where homeless people live), orphanages, hospitals one part of the team will go to Tanzania to the footsteps of Kilimanjaro.

To spread the vision of adoption of children and to support coming to life movement towards Africa without orphans, the international team plan to ascend the top of potentially active volcano – the highest point of the Black Continent 19341 Ft. The fearless conquerors of the mountain tops are going to raise banners of “Pilgrim”, of their native city Mariupol, of Ukraine, of the project “World without orphans”. Alongside with Gennadiy Mokhnenko and his adopted sons there will be some more people who will participate in the ascension to Kilimanjaro – Ruslan Malyuta, an international coordinator of the movement “ World without orphans” and some representatives from the US and Kenya.

Gennadiy Mokhnenko: « We plan to overcome those 19341Ft calling unto people to adopt orphans. We carry this calling in all our actions. If we have orphans in out orphanages it means there is something wrong with us not with them. Those who used to be street kids themselves – Andrii from the age of 6, Sergey from the age of 4 and Slavik from the age of 5 and afterwards they were adopted and today they are starting with us to Africa to serve street kids there. And my heart rejoices about it even more. I am sure we will be able to make this dream come true – we live for that, we raise these wonderful kids and make our small exploits and encourage others to do the same”.

In this trip the film crew of the Russian TV company “Russia Today” will carry on making documentary about unprecedented feats for the sake of the dream about world without orphans. Gennadiy Mokhnenko is certain that the world needs to see and to hear that Russian speaking people instead of going to health resorts go to the edge of the world to quite a risky place and they agree with lots of inconveniences during the trip, they pay money and consciously go towards difficulties in order to help kids on the Equator.

Gennadiy Mokhnenko: « There are no children who are nobody’s. We are quite certain about it. Those people who had gone with us to such a trip organize their own missionary team now and raise humanitarian aid for Kenya. Beside our team there is one more team who will go to other area in Kenya. Our mission grows and hearts are being set on fire. We are sure that in such a way we will be able to change situation and to solve many issues in the world. Join our dream – world without orphans!”