The Worldwide bikes tour “The world without orphans!” – The German stage. 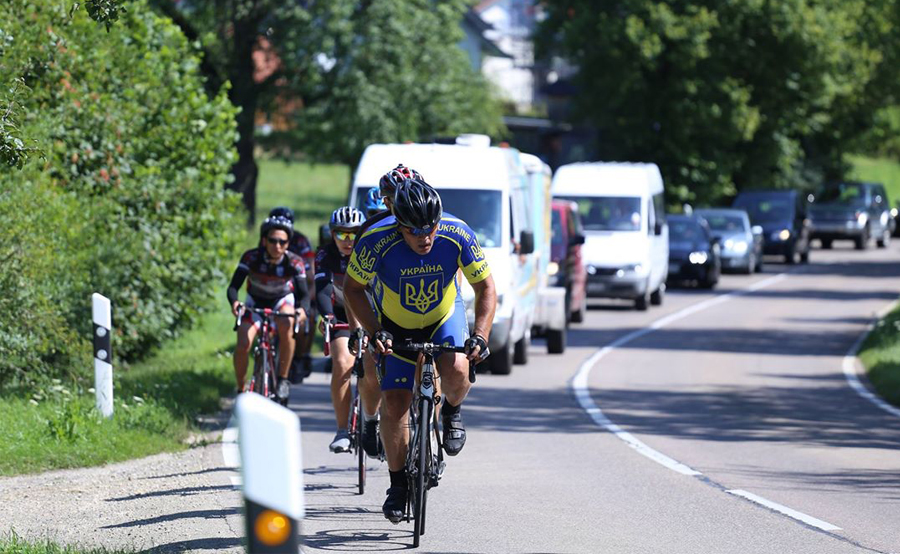 On July 16 th the group of the former street kids and of their adoptive parents from Ukraine continued their worldwide bike tour “The World without orphans” with the vision about the world where there are no lonely children. Having ridden within the last 5 stages across the entire Ukraine, Russia and a part of Europe, the former street kids show by their own example how a life of an abandoned kid may change when he or she is taken to a loving family and they plead on behalf of other kids who need caring parents. This year the team will complete the fifth stage of the worldwide bike action across the Eurasian continent, on riding across Germany, Switzerland and France.

The fifth stage of the worldwide bike action started in the town of Bochum in the north of the state.  Famous Ukrainian performers such as Anton Kopytin (The Voice of Ukraine) and Askold Kvyatkovsky ( “ The Golden Saxophone”) escorting the team along their German stage brought much joy to those who came to the solemn start of the stage and supported the participants of the bike tour. The prominent hymn “How Great Thou Art” performed by Anton and incredible “Adagio” from Askold have prompted an amazing stream of testimonies.

Within the last couple years hundreds of people accomplished their dream – they have a family now. And already during this stage pastor Gennadiy received some emails from adoptive parents:

Jelena Sca:  It is 3 orphans less in Riga now!!! I thought I would help one orphan and maybe later I would take another one but it turned out I met three of them… The sacrifice you pay riding across the world on your bikes with the orphans helped me to make the decision!!!May God bless you and your team!!!

Airin Stegmaier:“ I was also inspired by your bike tours The World without orphans. I was watching you for years. As a result my husband and I took two kids from an orphanage in addition to our 4 biological children. I must admit that it was a real fight since having 4 kids here in Austria we had no right to adopt kids from orphanages and we were not suitable age wise. In Austria kids of the age of 6 and above in fact have no chance to get from the orphanage into a family and they stay in orphanages till they turn 18.This is why going through the whole procedure and realizing that otherwise these kids won’t be given a chance to live in family and to be capable to become loving and loyal parents of full value…. It made us even stronger in our persistence… And we have won the battle! The kids are with us. Yesterday the girl, she is 11, called me Mom 20 times. It is unusual for her. I get it”.

The worldwide bike action “The World without orphans!” is organized ahead with the pastor Gennadiy Mokhnenko – the director of the largest rehab program for street kids in Ukraine “The Republic Pilgrim”. Since 2000 over 3000 kids went through the program. 60% of the youth could go back to their biological families and many were adopted, taken to the adoptive families and fostered. Gennadiy and his wife Olena became parents for 32 kids who had been previously abandoned.

“My adoptive kids were living on streets. Some of them were at the age of 4 and we knew that if we don’t take them the majority will find themselves in prisons or will ultimately die” – Gennadiy Mokhnenko tells.

Illingen- Swenningen After starting in Bochum the team went through Dillenburg, Frankfurt am Main, Heilbronn, Plüderhausen, Villingen-Schwenningen and Waldshut-Tiengen. Already in the first days of the stage the cyclists experienced riding at the heat of +40 degrees Celsius and under cold showers, endless uphill and downhill roads, abrupt turns and incredible tiredness since every day they have to ride 70-100 km. The guys receive help of hospitable Germans with a great gratitude along the whole route.

Gennadiy Mokhnenko:« At one of the passes the team pulled over right in front of a big bike shop!!! We began to converse with the staff… The boss, the owner of the business got engaged in the conversation. When they realized who we are and what we are here f something incredible started happening. At first they gave each member of the team (and it is 30 people) a can of Red Bull… Then they looked at our bikes and were horrified by the worn condition some of them were in. So within an hour the team of experts have tuned, lubricated, tightened and changed parts for us!!! And at the end they brought tables and benches and ordered 30 pizzas, a lot of boxes of beverages and made a feast in our honor!!!”

A friendly reception was waiting for the guys in Pluderhausen where beside important meetings with people and partners of the charity fund “Pilgrim”, beside the stories about the dream and beside the testimonies from the lives of the kids, the mayor of the German town arranged a solemn reception and a banquet.  On the same day the pilgrim took part in the annual Folk festival of the wind music which gathers more than a thousand Germans from the surrounding lands. As a gift from the mayor, the team also had the opportunity to ride on traditional attractions and to eat real German sausages as much as they wanted.

And right there the very next day the former Mariupol street kids could visit one of the most luxurious museums of the world – Mercedes Benz which has become one of the brightest and unforgettable impressions.

Already before the border on Switzerland the team of the worldwide bike action “The World without orphans” took part in the conference of one of biggest churches of Germany in Villingen-Schwenningen where the pastor Jacob Friesen and his church attendees showed much hospitality and took a good care of the former Mariupol street kids.

Gennadiy Mokhnenko: “Orphanages are not the answer for a child. Only family can solve vital issues. We were talking about importance of taking an orphan in your family if you can. If there is enough space for three there will always be enough space for four… Where there is enough food for four there will always be enough food for the fifth one… orphanages are to be left in the past. And surely kids should not be raised on street. Orphans need families”.